On the morning of Monday, July 13, 1863, thousands of white workers in Manhattan erupted in what’s still the deadliest rioting in American history. Mobs rampaged through most of the week in an orgy of savage murder, arson and looting. They hung black men from lampposts and dragged their mutilated bodies through the streets. They beat and murdered the pitifully small squads of policemen and soldiers the city initially mustered—and grotesquely defiled their corpses as well. It took federal troops to start restoring order to burning, rubble-strewn Manhattan that Thursday. The published death count was 119, but many New Yorkers believed the actual toll was hundreds more.

The immediate spark of the uprising was the start of conscription into the Union army that Saturday, July 11, when the names of 1,236 New Yorkers were pulled from a wooden drum, nicknamed “the wheel of misfortune,” in the draft office at East 46th Street and Third Avenue. The rioting on Monday started there and fanned out.

The event has gone down in history as “the draft riots,” but trouble had been brewing long before the draft began. In the decades preceding the war, large numbers of New Yorkers—workers, businessmen, bankers, newspaper editors and politicians—had been adamantly pro-South and pro-slavery. Long after slavery was abolished in the state of New York, the city’s economy was as dependent on it as any plantation owner was. The gigantic international trade in Southern cotton was the key. New York banks financed the spread of cotton plantations across the Deep South. New York merchants sold plantation owners their supplies. New York’s mayor in 1863, George Opdyke, had made a fortune selling them cheap clothing they provided slaves. Cotton accounted for a whopping 40 percent of the shipping in New York harbor. The city’s hotels, restaurants and entertainment venues filled up every summer with Southern visitors.

So much of New York’s business community had no desire to end slavery. Meanwhile, opportunistic newspaper editors and demagogic politicians kept the workers in fear that the end of slavery in the South would flood the city with cheap competition for their jobs. A sharp recession and widespread unemployment in 1857 deepened their anxieties.

Not surprisingly, then, many New Yorkers were hostile to Abraham Lincoln. Like their Southern business partners, they were convinced he would move to abolish slavery, despite his repeated assurances to the contrary. New Yorkers voted two to one against him in 1860. When Southern states started to leave the Union after Lincoln’s election, the city’s business community begged their clients not to go. Mayor Ferdinand Wood seriously suggested that the city should secede along with them.

When war came in the spring of 1861, thousands of New York workers signed up to join the fight, lured by the prospects of a weekly pay packet as well as a short, glorious adventure. Two years of carnage on the battlefield reduced the volunteerism to a trickle. When Lincoln issued his Preliminary Emancipation Proclamation in September 1862, New York workers launched protests, while soldiers and officers in New York units deserted or resigned their commissions, declaring that they’d fight to preserve the Union but not to free the slaves.

The workers had other complaints. For all their worrying beforehand, New York businessmen soon figured out how to make huge profits from the war, giving rise to a showy new class of millionaires, the “shoddy aristocracy.” But workers’ wages stagnated, while the price of necessities soared because of wartime inflation. A year of protests, often including racial violence, preceded the July riots. The final insult came in a provision of the conscription law that a draftee could buy his way out of service for $300. That was the average worker’s annual pay. Protesting that it had become “the rich man’s war but the poor man’s fight,” the workers erupted.

Thus the “draft riots” were actually an expression of rage and fear on multiple levels. An entire sector of the white population, with grievances real and imagined, lashed out in a revolt that was a deadly mix of misplaced racial hatred, economic insecurity, and class warfare. Though it was more than 150 years ago, there may still be lessons to draw, given the ample evidence in recent years and even days of a racial divide as wide and deadly as ever.

John Strausbaugh is the author of City of Sedition: The History of New York City during the Civil War 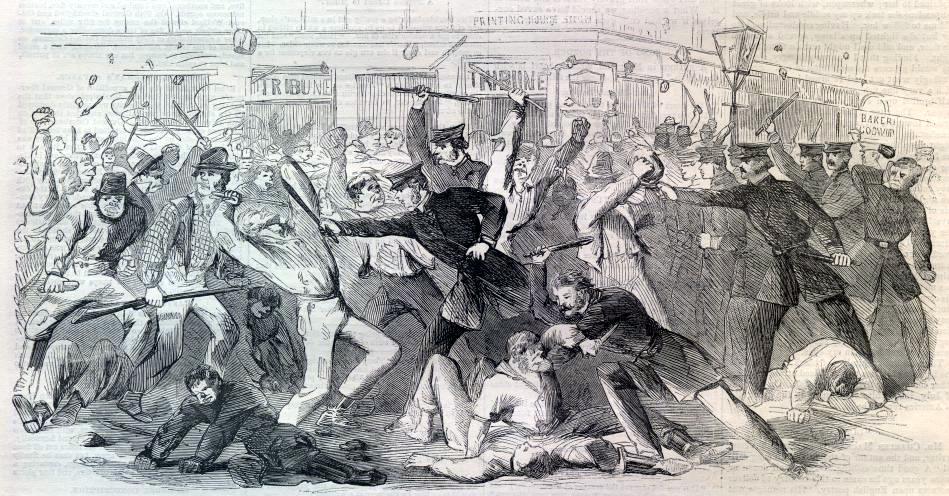