A woman enters a gallery, clad in a black gown, what appear to be black gloves and barefoot carrying a large bag. She walks through the space, eyeing the handful of people scattered about inside, before turning to a blank white wall, reaching into her bag, and hurling a fistful of an unidentifiable viscous, black substance at the clean sheetrock. She does this for several minutes, before leaving without saying a word.

Only a select few people were invited to watch Kenya-born, Brooklyn-based artist Wangechi Mutu‘s brief performance Throw at Pace Gallery, and I was one of them. Mutu’s contribution to the gallery’s sprawling summer group show, “Blackness in Abstraction,” was a brief and furious blend of painting and dance and an unforgettable sight considering that much of her performance work doesn’t happen before an audience.

The show features work by 29 artists total—Carrie Mae Weems, Rashid Johnson, Robert Irwin and Louise Nevelson, to name a few—who explore the color black through various media, including sculpture, painting, video, photography, installation and, in Mutu’s case, performance. Contemporary artists are shown next to major works from the 20th century, dating back to the 1940s, and curator Adrienne Edwards has chosen pieces that span a wide range of social, political, conceptual and aesthetic uses of the color.

Mutu’s site-specific piece originated with an earlier work she created in 2010. That film, titled Shoe Shoe, is a short black and white clip reminiscent of CCTV footage, and captures the artist dressed as a vagrant and pushing a cart filled with shoes down the street, occasionally chucking them two at a time into the air. “I also love shoes. If I can find a way to use them I will,” Mutu told me by phone.

“We may think we have no power or voice and are completely lacking in space to say what we need to say. [But] there’s creativity in protest; there’s something courageous in throwing a shoe,” she said.

Both performances were directly inspired by a 2008 incident in Iraq where a reporter threw his shoes in anger at President George W. Bush during a press conference. The act of throwing, Mutu said, varies depending on the social context: in some cases, it is used in defiant protest, and in others the intent is malicious and violent, such as with stoning.

“I did come out of it with a lot of adrenaline. It really gets the heart and mind pumping, carrying a 20 pound basket full of pulp,” she said. “Honestly, I wish I could have carried more.”

Mutu acted out the same motion in Throw with her body as she did in Shoe Shoe, but this time she hurled a pulpy goop made from newspaper and magazine clippings she’s collected over the years in her studio. The clippings were fermented over the course of two weeks by soaking them in boiled tea leaves and food dye.

For those viewing Mutu’s piece in the gallery, there is mystery behind the splattered remains she’s left behind; video footage of the performance exists, and is likely to be used in a future artwork.

“What’s satisfying about Throw is it’s the first time I’ve gone in front of a tiny audience and done a performance with minimal surroundings,” said Mutu. “It wasn’t embellished, it was pure ritual. It frightens me to do performance in front of people, but that’s part of the beauty.”

“Blackness in Abstraction” is on view at Pace Gallery’s 510 West 25th Street location through August 19. 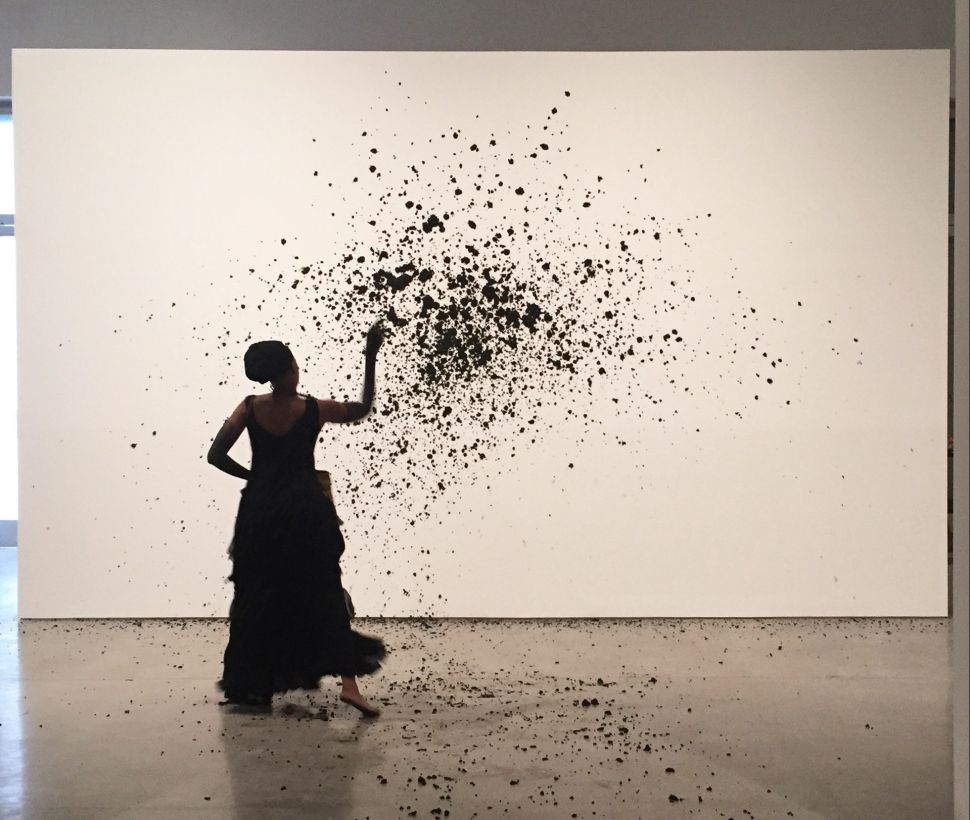