For her 2016 Democratic National Convention speech, First Lady Michelle Obama decided to go true blue, opting for a cap sleeved Christian Siriano fit and flare midi-length dress. The slightly understated number capitalized on a silhouette that FLOTUS has been building while in the White House. Save the sleeve shape, the shape is almost identical to the Tracy Reese gown she dawned for the 2012 convention. But the night was just another accolade Siriano can add to his mantel from this year alone.

Having shot to public fame with sassy quips and over-the-top designs as the winner of Project Runway season four, Siriano has built a bonafide fashion business for himself, frequently finding himself in the headlines over the past seven months. Monday night’s convention marked the second time Obama has worn the American designer, but she joins quite the list of women who are fans. In February the designer hosted Coco Rocha, Naya Rivera, Jaime King and Ashley Madekwe in the front row of his Fall 2016 show. And while four stars is a healthy number, it paled in comparison to the whopping 13 women he dressed at the American Image Awards three months later. It was there that the designer picked up a Designer of the Year award.

Even that award capped off a busy few weeks for the designer: in April he launched his first bridal collection after years of doing custom bridal orders for clients. Done in collaboration with Kleinfeld, that range boasted everything from an ombre ball gown to interpretations of a past Taylor Swift look. Then, in early May, the designer debuted his latest range with Lane Bryant in a runway show at the United Nations. With models like Danielle Brooks of Orange is the New Black as well as blogger Nicolette Mason and incoming America’s Next Top Model judge Ashley Graham, the show was a big deal.

Come June, Siriano got a bit of a press coup when he responded to Leslie Jones’ frustrations on Twitter about not being able to find a dress for her Ghostbusters premiere. Thanks to his unique atelier set-up, the designer was able to turn around a custom design for the Saturday Night Live comedienne in time for the showing. The action fell in line with Siriano’s longstanding effort to dress all women “no matter age or size” and brought with it a flood of headlines.

Only a month later, things got personal when the designer himself got married to his longtime fiancee Brad Walsh. Everyone from Christina Hendricks to Kelly Osbourne attended the all-white event (wearing Siriano’s designs naturally) while Brooks was on hand for a performance. The final guest list tallied 150 people total.

Just a few days later, on July 13, the First Lady got her first Siriano moment in a memorial service for the five police officers killed in the Dallas shooting earlier this month. The black dress was appropriate for the somber occasion. “It’s the first time she’s worn something of my design, so for me this is an incredibly bittersweet moment,” Siriano wrote on Instagram at the time. “Despite my admiration for her at this moment, I wish there was no reason for her to need a black dress today. I stand in solidarity with all the families who lost their loved ones across the country last week.”

The convention look is no doubt a capping off of an intense period for the designer. And if the Obama effect is real, it’ll definitely be worth it in the end. 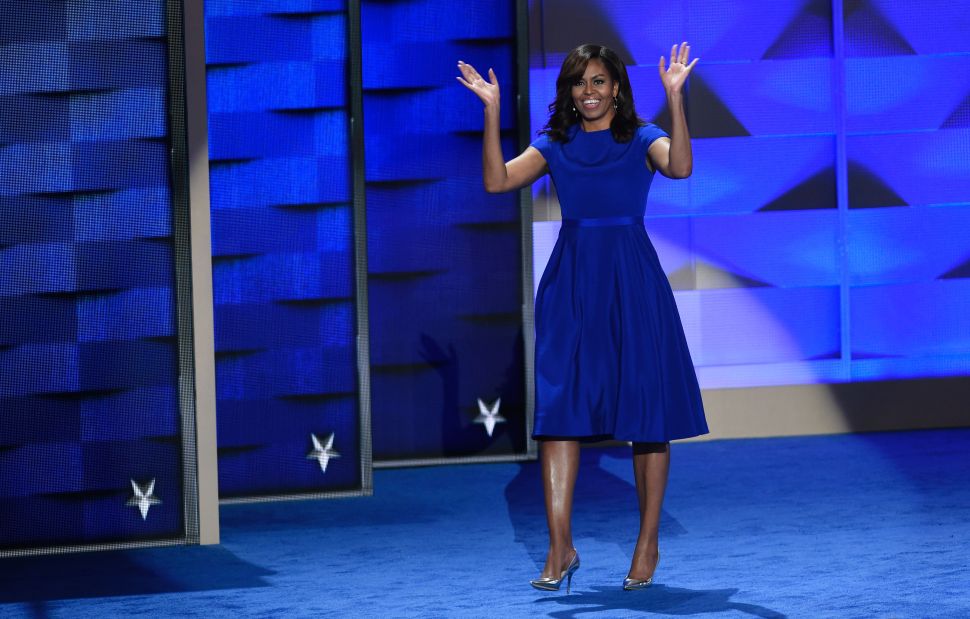