In a string of accelerating strikes across the map, the Islamic State’s attack on a French Catholic parish stands out for its symbolism in the terror group’s ultimate goal.

Followers of any faith other than their Wahhabist interpretation of Islam are reviled by ISIS as “infidels,” but certain religious groups have more strategic significance than others.

Their targeting of Jews is as clear as it is for any other terror group from Hamas to al-Qaeda to the mullahs in Tehran: they want to wipe Israel off the map and seize Al-Aqsa for Muslims. ISIS’ war in the Sinai, infiltration in Gaza and its goal of carving “pathways” through Jordan and Lebanon are critical cogs in their strategy to be the ones to “liberate” Jerusalem. According to an ISIS e-book, “Black Flags from Palestine,” they think the final confrontation with the antichrist will be at Ben Gurion International Airport.

The sacking of Rome and the Holy See, after all, is essential to their apocalyptic game plan.

Terrorists who had pledged allegiance to ISIS saw their opportunity Tuesday when Catholics started their day at Mass in the Normandy town of Saint-Etienne-du-Rouvray. They slit the throat of Father Jacques Hamel, 86, after taking the priest, two nuns and two parishioners hostage.

“They forced him to his knees. He wanted to defend himself,” one nun, Sister Danielle, told BFM TV. “And that’s when the tragedy happened. They recorded themselves. They did a sort of sermon around the altar, in Arabic. It’s a horror.”

ISIS’ Amaq news agency rapidly claimed responsibility, generically calling the attack “operations in response to calls to target countries belonging to the crusader coalition.” But that quickie statement downplays their motive behind ritually murdering the priest.

In April, Italian authorities arrested four people in an alleged plot to target both of ISIS’ main religious enemies: the Vatican and the Israeli Embassy in Rome. Officials said Italian national Abderrahim Moutaharrik received instructions from ISIS to hit Rome during the Holy Year of Mercy, a jubilee declared by Pope Francis that runs through November.

“I swear I will be the first to attack…in this crusading Italy…the Vatican with the will of God,” said Moutaharrik in an intercepted March message, according to officials.

Long before ISIS escalated into the terror rampage we see today, Iraq’s ambassador to the Holy See warned that ISIS wants to assassinate the pope.

“What has been declared by the self-declared Islamic State is clear—they want to kill the Pope. The threats against the Pope are credible,” Habeeb Al Sadr told Italian daily La Nazione in September 2014. “I believe they could try to kill him during one of his overseas trips or even in Rome. There are members of ISIL who are not Arabs but Canadian, American, French, British, also Italians. ISIL could engage any of these to commit a terrorist attack in Europe.”

What will ISIS do to achieve its goal of putting the menacing black flag atop St. Peter’s Basilica? The question is, what won’t they do? Without the conquest of Rome, their whole caliphate road map hits an insurmountable speed bump.

The threats against Rome and the Vatican span the breadth of videos, articles and photo essays that comprise Islamic State propaganda. In a 2015 e-book, “Black Flags from Rome,” ISIS called on recruits within Europe to rise up “to pave the way for the conquest of Rome” from all directions.

“Muslim fighters from all European countries will continue the fight, breaking borders until they can reach Northern Rome,” the book vowed.

They’re pushing the clock, though, as their stated timetable calls for the conquest of Rome by 2020.

Seven months after that, they claim, the antichrist will come and the stage will be set for the final battle in Israel. “It’s important to note that during this time period, Christianity and the Pope in the Vatican will be fully engulfed by the Zionist system,” ISIS wrote in “Black Flags from Palestine,” predicting that the jihadists can slyly win allies in Europe among those who oppose Israel or the Catholic Church.

ISIS’ apocalyptic vision puts a target on Jews and Catholics that’s intensified by their conquest goals. That’s why they quickly, proudly trumpeted the assassination of an elderly priest who did nothing more than say Mass on a sleepy Tuesday morning, with more boasting and propaganda materials to come.

When ISIS hits Jewish and Catholic targets, they consider them first strikes. Washington, however, tries to erase any perception of a holy war with ISIS, understandably fearful that new recruits will be pulled into the fight.  Which is exactly what’s being waged in the mind of the Islamic State.

Bridget Johnson is a fellow with the Haym Salomon Center, NPR contributor and D.C. bureau chief at PJ Media. 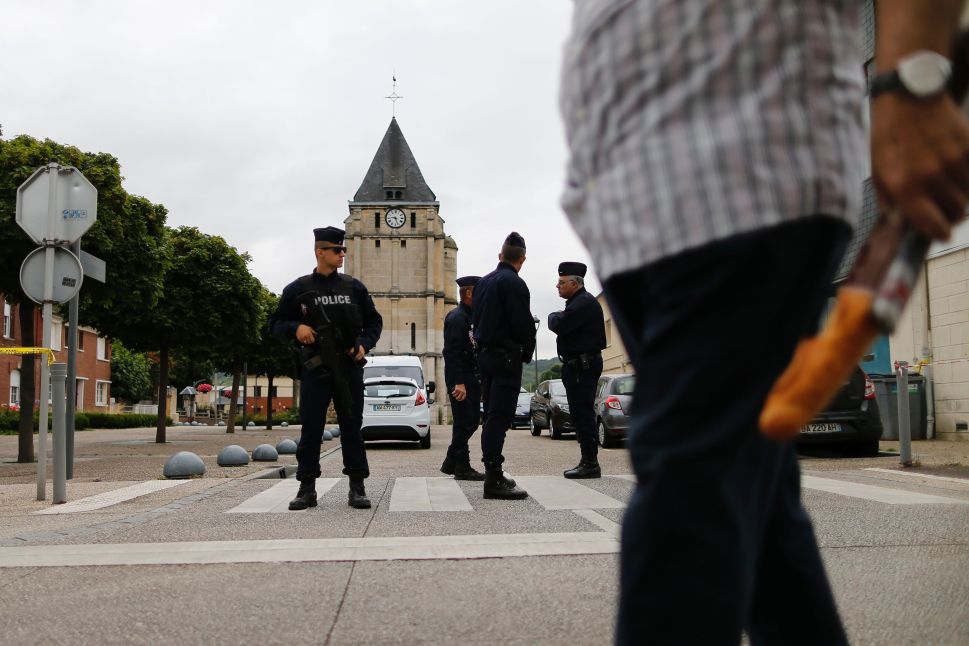