I am no Brian Eno, but I once ate Chinese food with him.[i]

In 1975, Eno released the first edition of his Oblique Strategies, a series of cards to be utilized by working musicians to help them overcome a creative block, think about a situation or a problem in a novel manner, or incite unique artistic solutions. These suggestions, which have since been revised and reproduced in many formats, include things like “Convert a melodic element into a rhythmic element,” “Reverse” and “Do the words need changing?”

These are literally the first three I randomly picked. You get the idea.

These are a fun and effective tool, they tend to be alternately inscrutable and practical, and they never say anything like “Send Dave Grohl three birthday cakes. On each, write ‘Dale Crover is a much better drummer than you.’ ”

For a very, very long time I have been working with bands, in bands, hanging around bands, producing bands, writing about bands, thinking about bands. I’ve learned some important things during that time, such as “Never leave your merch money unattended,” “never mix on the big speakers” and “Clamato, the magic elixir of the North, is Vodka’s ideal mate.”

I’ve learned other useful things, too, so I was thinking that I ought to produce my own version of (something like) Eno’s Oblique Strategies.

These can be used in exactly the same way as the more famous suggestions/koans they are modeled after. At any given time, randomly select one of these, and let that guide your action. I believe these are applicable to any studio situation (along with rehearsals and writing sessions), in any genre of music. These may even be useful for non-musical disciplines. Oh, and these are all to be used individually, and not necessarily consecutively.

I am pleased to present you with my Timblique Strategies.

* Take Away the Drummer’s cymbals (you can leave the hi-hat).

* Send the Drummer out for beer and when he’s gone, have the bassist replay all his parts just using the kick, hi-hat, and snare.

* Stop and listen to “Hallogallo” by Neu!

* Take that cool section in the bridge and use it to start the song.

* Double the bass an octave up.

* Listen to “Human Fly” by the Cramps and re-think what you’re doing.[ii]

* Do a rough mix without any guitar.

* Give the meal you just ordered to the homeless guy on the corner.

* Ask yourself, “Why are we putting a guitar solo in there?” Guitar solos are like the electoral college of music: No one quite knows why they’re there, and they’ve negatively altered the impact of some important things.

* If anyone in the band is under 30 and has a beard, do not let them to play on the track you’re recording right now (if that leaves limited players available, work with that).

* If you’re stuck composing a song or a section, play the riff to “(Don’t Fear) the Reaper” backwards (or sideways), in the style of David Gilmour.

* Tell the bassist to do a take using only the two “high” strings.

* Say to the engineer, “Hey, that part you just recorded, crank up the reverb, and then just let me hear the reverb return, not the original part itself.”

* Stop and listen to “Everybody Wants Some” by Van Halen. Then say, “Now, let’s try to imagine if Sigur Rós wrote that.” Then say, “No, I’m serious.”

* Play guitar through the bass amp.

* Ask the drummer if he agrees Mo Tucker is a better drummer than Nicko McBain, and if he disagrees, rephrase the question as an ultimatum.

* Hire Peter Holsapple to come in and play something.

* If you find the engineer engaged in a long discussion with the drummer about what’s the best mic to use when mic’ing the bottom of the snare, fire the engineer.

* Add a one-finger keyboard part to whatever you’re working on.

* The next person who mentions Big Star has to buy dinner.

* Ask the person answering the phones to play bass on the next take.

* Mic the snare and put the mic through a Fender Twin Reverb amp.

* Listen to “Have I The Right” by the Honeycombs, twice.

* Stop what you’re doing, tune the guitar to DADGAD, and spontaneously write and record a song.

* Watch Andrei Tarkovsky’s Solaris and write a song for it.

* Play the bass through the guitar amp.

* Listen to “Jailbreak” by Thin Lizzy and re-think what you’re doing.

* Get a non-singing member of the band to double the lead vocal.

* Ask the bassists’ girlfriend if she has any suggestions.

* Write a part, a bridge, or an entire song based entirely on words made up of chord names (for instance, “Dad be dead” or “Be Abba, babe”).

* Instruct the Drummer to listen to everything Cosimo Matassa recorded between 1955 and 1965, and to write an essay about it.

* Suggest that the bearded member(s) of the band shave.

* Tell the bassist to do the next take only using the two “low” strings.

* Go to the Alan Lomax Archive and randomly listen to a track.

* Prohibit anyone from referring to or discussing the Beatles.

* Cut the next vocal outdoors.

* If anyone refers to OK Computer, ignore his or her suggestions for the rest of the day.

* Replace the guitar solo with something that has nothing to do with a guitar solo.

[i] My band was signed to his label. It’s a long story.

[ii] I tried this with Duncan Sheik. I don’t think it helped. 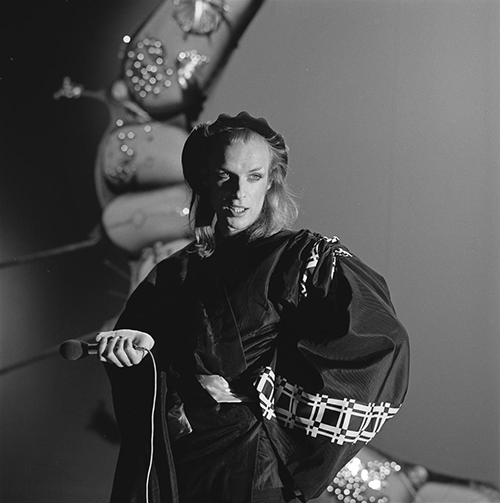