Hamilton is a Tony Award-winning smash that has taken the world by storm, but it’s also one of the first Broadway shows that truly used the internet to its advantage: the show’s cast recording was streamed on NPR before it was released, and composer Lin-Manuel Miranda annotated the score on Genius with help from fans.

But the show’s biggest contribution to internet culture was #Ham4Ham. The Hamilton lottery, which allows a lucky few to see the show for only $10, was retrofitted for the age of the internet because cast members and special guests performed for the crowd before the drawing, and the audience eagerly posted their videos on YouTube. (The performances were online only during the winter).

The fun is coming to an end, however: Hamilton announced on Twitter yesterday that the Ham4Ham shows are being suspended for now, for reasons of safety—the area around the Richard Rodgers Theatre gets so clogged with traffic every week that the show requires extra security. The last Ham4Ham show is at 12:25 this afternoon.

As the curtain falls on this Broadway tradition (and YouTube smash) here’s a look back at some of Hamilton‘s most popular viral videos:

Phillipa Soo, Renee Elise Goldsbery and Jasmine Cephas Jones didn’t just play sisters onstage, they were a squad offstage as well. The trio proved that here when they sang Alicia Keys’ “Fallin'” in perfect harmony. (And though it’s not a Ham4Ham, their cover of Billy Joel’s “For the Longest Time” will also give you all the feels)

Old school met new school, hilariously, when three cast members who play sisters in the Broadway revival of Fiddler on the Roof (including one who interned for Miranda) auditioned to play the Schuyler Sisters in Hamilton.

Have some tissues nearby for this one: Miranda’s elementary school music teacher Barbara Ames composed a song about Martin Luther King Jr. to teach her students about the civil rights leader’s life. So Miranda gathered 50 alumni of his elementary school to perform the song, and pay tribute to an influential educator.

Jimmy Fallon Sings “You’ll Be Back”

One of Hamilton‘s many celebrity fans is Tonight Show host Jimmy Fallon, so Miranda put him to the test, making him sing one of the show’s songs while imitating other musicians. If you ever wondered what Bruce Springsteen and Bono would sound like singing show tunes, well now you know.

Miranda is an unabashed Broadway fan, so when he got the chance to make a cameo in the Broadway revival of Les Misérables, he couldn’t pass it up.  All you have to do is watch his face as he listens from offstage, and you’ll go on the emotional journey right along with him.

The School of Rock Kids

Meet a group of 12-year-olds who are cooler than you’ll ever be, as the cast of Broadway’s School of Rock shreds Guns N’ Roses’ “Sweet Child O’ Mine” along with Tony winner Lena Hall. Miranda rocking out in the background is a bonus.

Broadway legend Patti LuPone famously abhors the use of cell phones in theaters, but she made an exception for all the theater fans who filmed her performance of “Give My Regards to Broadway” at Ham4Ham. She also went up on the theater’s roof to parody her Tony-winning performance in Evita.

In the funniest Ham4Ham yet, the foulmouthed puppy puppet roasted Miranda before his last week of Hamilton performances. Triumph also sang a parody of “You’ll Be Back” insulting Miranda’s upcoming projects, telling him “No one asked for Mary Poppins 2.”

Hamilton Goes for the Gold

To celebrate U.S. Olympic prowess, the Hamilton cast hosted gold medalist Maya DiRado, presenting her with several gifts before harmoniously serenading her with the National Anthem. Nothing will make you feel more American (unless you’re Colin Kaepernick).

What does the cast have in store for the last Ham4Ham show? Only time will tell.

Update: The final Ham4Ham didn’t disappoint, as Goldsberry performed “Congratulations,” a song cut from the show before it moved to Broadway. Slay girl slay: 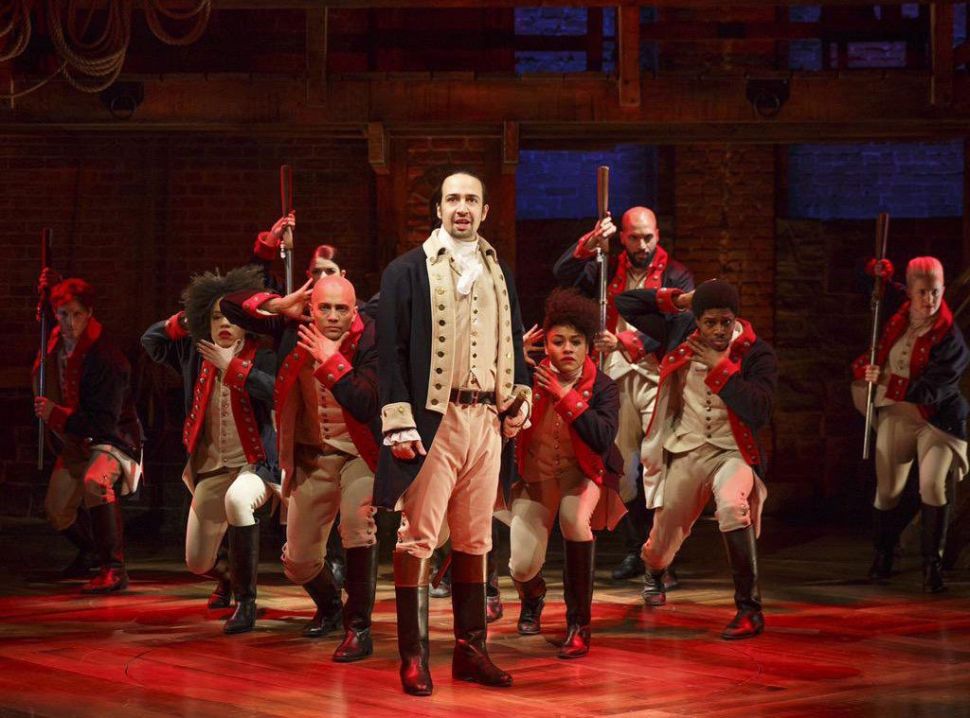