The Picture that Started it All: Fulop and Newark Mayor Ras Baraka reenact their famous impromptu “I’ve got your back” Atlantic City PolitickerNJ pic that highlighted their burgeoning political alliance back in 2013.

Sources told PolitickerNJ this morning that Jersey City Mayor Steven Fulop and Newark Mayor Ras Baraka got face to face on Friday and shook hands on a commitment to assemble a 2017 Line B to run with Fulop in the Democratic Primary.

The meeting took place at Tops Diner in East Newark with a full complement of operatives in tow on both sides, including Kiburi Tucker and Middy Baraka with the Newark mayor and Mark Albiez and Jason Solowsky with Fulop, who appears to be moving vigorously ahead with his run for governor.

The goal, the source said, is to put together an entire Fulop and Baraka-friendly slate in Essex, with Baraka taking the lead in selecting those candidates best equipped to put up a real fight off the line in his home county. The two urban allies will play strategic baseball next year, summoning slates in assembly and freeholder races where they think they stand the best chance of spiking turnout and even winning off the line.

The conversations represent the latest in a political tug of war that goes back to when the Democratic Party establishment tried to prevent Baraka from becoming mayor, as Fulop went all in with him.

Now Baraka’s going to be with Fulop.

Names in the mix as possible candidates include Port Newark Manager Alturrick Kenney and Recreation Director Pat Council. The Fulop forces likely recognize the difficulty of going up against the county organization in LD29, where state Senator M. Teresa Ruiz stands at the top of a totem pole essentially designed to augment the best assets of Ruiz’s organizational ties: the North Ward Democratic Organization and, of course, the county.

But they promise to be competitive, the source said.

Norcross went out of his way at the Democratic National Convention (DNC) to play psychological panther games with Fulop at the Jersey City mayor’s breakfast, underscoring the degree of separation between the two men. At present, most signs point to a strong leg up for Norcross-DiVincenzo ally Senate President Steve Sweeney (D-3) to land the Essex line. Some sources argue that former Goldman Sachs executive Phil Murphy has labored sufficiently effectively to be able to out-duel Fulop for the Essex line on the strength of Norcross’ and DiVincenzo’s resistance to the Jersey City mayor in all weather. The two political bosses would even back Murphy – an ally of their longtime foe former Governor Dick Codey – if it meant sticking it to Fulop. Others make the case that the Codey-Murphy connection is too strong for the pooh-bahs to bear, thereby making Murphy a non-starter in Essex.

Weekend sources told PolitickerNJ that DiVincenzo continues to muse about his own run for governor, fueling speculation that if Sweeney stalls or stumbles, he and Norcross would go with a DiVincenzo candidacy sooner than back Murphy or Fulop.

If Fulop means to exact the most political force out of his relationship with the strong and by all signs at the midway point – popular – mayor of Newark, Murphy apparently intends to use his ties to Codey to translate into his own line. Senator Ronald Rice (D-28) typically aligns with Codey on political matters and in LD34, which suggests that barring either a spasm of self preservation and a deal to stay on the line even if it means backing a Norcross candidate (like Codey, Rice has a longtime adversarial relationship with the South Jersey boss), or a surge of reanimated love for Baraka, Rice – who like Codey has run off the line before and won looks best positioned right now to back Murphy.

Assemblywoman Sheila Oliver (D-34), a former Assembly speaker, in a civil war scenario could be pictured sticking with Murphy.

Then again she backed Baraka for mayor in 2014 against the machine.

Then again, she works for the county.

But since she experienced with no small degree of discomfort the inner workings of the Norcross-DiVincenzo imbroglio during her years as speaker, and felt the sting of South Jersey in particular over her resistance to charter schools, Oliver could surface with fewer ideological indentations at the very least on Team Murphy or conceivably, in a pinch, with Fulop. 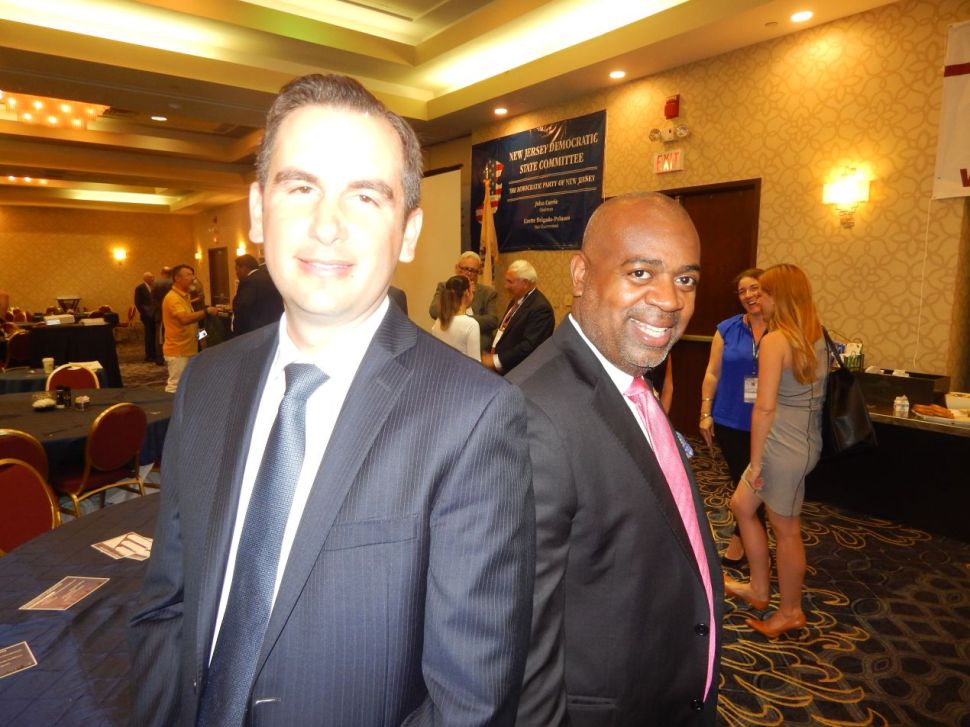