When Mansur Gavriel launched their streamlined bucket bag in early 2013, the style was hailed as trendy and a total must-have. It was also assumed by most to be a fleeting silhouette, one that would linger for a few months, maybe a year, and fade into the background while another popular handbag rose to the forefront. It’s now 2016 and the bucket bag is still reigning supreme and countless knockoffs of the Mansur Gavriel style have popped up on the shelves of Kenneth Cole and Forever 21. However, most other designers have decided to put their own spin on the bucket bag, further proving the trend’s longevity. As the start of the fall shopping season has descended upon us, Observer talked to four handbag designers to see what sets their bags apart from the competition. That includes a new label, GG Maull, which was founded by Gretchen Maull, an alum of Proenza Schouler and Missoni. Also included is Khirma Eliazov, who is basically an expert on exotic skins and Vicki von Holzhausen, a former automobile designer at Audi and Mercedes-Benz. Now the question remains, which bucket bag will you be carrying this fall?

Khirma Eliazov: “I wanted to create a smaller version of the bucket bag that was structured yet still looks and feels soft, something not too bulky that can hold its classic shape. The Edem mini bucket bag still has ample room for your everyday essentials; the interior features three separate pockets inside and an outer pocket for easy organization. My signature handwoven handles allows you to wear it as a top handle or as a crossbody, with the included leather strap.”

Kimberly and Nancy Wu of Building Block: “The Disc bag is a classic to our line, in that it expresses an imaginative and elemental side of Building Block. The Disc has an exaggerated leather base that acts as a mini foot/pedestal, the goal being to magnify the functional elements of these bags while utilizing very pure materials.”

Gretchen Maull of GG Maull: “I wanted to include this shape in my first collection because the bucket bag has become an iconic shape that should be in every woman’s wardrobe. When designing The Bombshell Bucket, I incorporated GG Maull’s signature diamond detailing for an Art Deco meets California cool look. It’s important to me that the bag be equally soft and structured, which is a delicate balance. GG Maull is handmade in Bologna, Italy using the finest Italian leathers and exotic skins and without compromising on quality.”

Vicki von Holzhausen of von Holzhausen: “The Mini Bucket is our most versatile bag and defines the von Holzhausen aesthetic of understated luxury. The design speaks to my background as an automotive designer with its clean lines and signature details such as the knotted and wrapped cording, which are both functional and elegant. Its minimal and subdued design stands out in a crowd.” 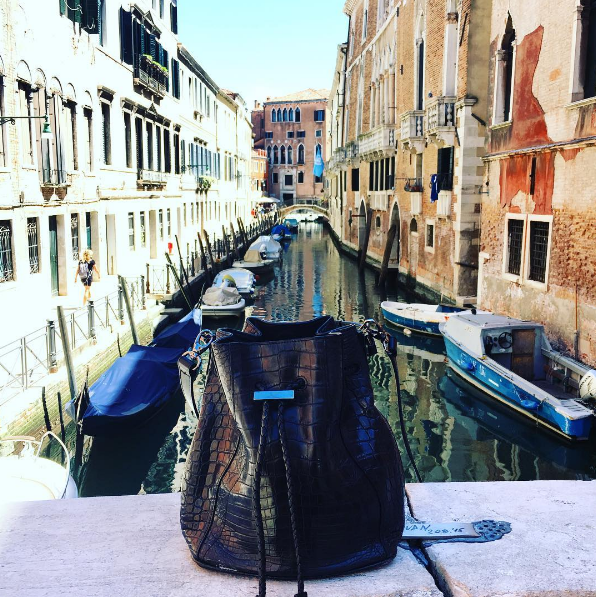