What’s up, nerds?! It is I, the giant beam of light shooting into the sky in every superhero movie, and I am here to stay.

You may know me from movies such as the Avengers and Man of Steel. You can’t miss me, because I am a Giant Sky Beam (GSB for short) that takes up most of the third act. I bring aliens or drill into the earth or some shit. It doesn’t really matter what I do, as long as it’s clear that I am bad news, baby.

I’m normally created by my best friend: a Cosmic Glowing Thing (or CGT). It could be a cube from outer space or a big machine that finally has all the right parts. In a pinch, any evil person raising their arms and cackling with electricity will do the job. It doesn’t need to be explained, because you all get it by now, right? The bad guy has a glowing thing now, so he created a Giant Sky Beam, which means danger.

A sinister… machine of some sort, probably? Warner Brothers

I shoot up into the sky. This will normally make the entire sky dark and stormy. Isn’t that dope? I think it’s pretty dope. Everyone runs away scared hahahahaha.

I let the heroes know: hey look, there’s a Giant Sky Beam in the sky. We should go stop that obvious new development. The villain(s) will be at the bottom of that brand new gigantic beam of light. Buildings around me crash. It’s awesome.

I am a portal to another dimension, probably.

I can’t remember if I was in Batman V. Superman, and neither can you.

You probably think I’m just a trend. Some flash-in-the-pan trope like The Villain Lets Himself Be Captured (TVLHBC), but what you don’t understand is how bright and obvious I am. Traffic reports in superhero movies are like, “looks like there’s another Giant Sky Beam, so plan for some congestion around the middle of our New York-type city. “ I’m not going anywhere.

I can currently be seen in Suicide Squad for some reason, and that’s a movie about a group of villains doing the job no one else wants to do. This does not make sense because everyone wants to stop the GSB. This is something the entire world can get behind. That movie should have been about anything else. 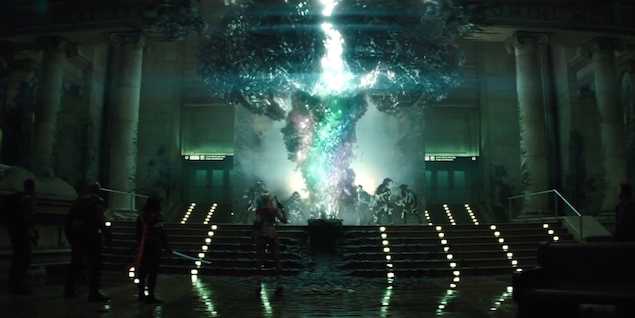 Literally every single one of these images was taken from the Suicide Squad trailer. Not kidding. Warner Brothers

Good luck shutting me off, losers! You will probably succeed. There’s a switch or you just touch the glowing thing. But first, punch your way through the main bad guy! His or her eyes are likely glowing by this time, so he or she is extra scary. Because, BTW, TVLHBC so he can steal the CGT to create a GSB and usher in the N-HFT, NBD. You get it. This movie is different from the last.

And I’m not just in superhero movies anymore. I’m in the new Ghostbusters and at least one of those Star Treks. I will slowly sneak into every movie. I will not rest until I am in indie dramas. Hey, Coen Brothers, your movies require Giant Sky Beams now. Yo, Oscar-bait, period pieces: the Civil War had Giant Sky Beams. Ensemble family dramas in which adult siblings reunite after one of their parents dies, throw in a Giant Sky Beam to give you all something to connect over. LET’S GO. GIANT SKY BEAMS FOR EVERYONE.

It’s what we all want.