The speaker of the New York City Council, Melissa Mark-Viverito, has an unusual strategy for solving city problems. When she came upon a broken Walk-Don’t Walk sign, she didn’t call 311 to report it. Nor did she shoot an email to the Department of Transportation’s chief to convey the importance of fixing this particular safety device—perhaps more quickly than normal. Instead, Mark-Viverito tweeted about it.

Surprisingly, a staffer at DOT saw Mark-Viverito’s tweet. But this on-top-of-it staffer almost immediately responded in kind—via Twitter—and informed the speaker that the most effective way to get fast action was to call the 311 hotline.

Mark-Viverito responded in full huff: “whaaaat???” she tweeted. “This a joke? Or an auto response? Or maybe even an intern? Not a response for an elected.”

To her credit, Mark-Viverito did what far too few public officials actually do in New York: observe what is going on around them, and actually report problems to the appropriate agencies.

To her credit, Mark-Viverito did what far too few public officials actually do in New York: observe what is going on around them, and actually report problems to the appropriate agencies. Why aren’t they more proactive in getting the city to act on the growing—and obvious—homeless population in the street? Or the awful traffic problems and construction jobs that seem to pop up without any traffic coordination?

We recall that the East River Plaza project was a direct result of Mayor Giuliani driving in from LaGuardia on the FDR and seeing a walled-off factory site. Frustrated, he picked up the telephone and called the right people to make something happen.

The same thing should have happened with Mark-Viverito and the broken safety device. The DOT commissioner, Polly Trottenberg, is a longtime policy professional with considerable experience in transportation matters. She oversees an agency that has a $900 million annual operating budget and a five-year $9.1 billion capital budget. The DOT is responsible for 6,000 miles of streets and highways, 12,000 miles of sidewalk and 789 bridges and tunnels, including the iconic East River bridges. DOT’s staff also installs and maintains over one million traffic signs, 12,700 signalized intersections, over 315,000 street lights and 69 million linear feet of markings. Surely Trottenberg would have shared Mark-Viverito’s outrage over a broken Walk-Don’t Walk sign and had the resources to fix it.

Unfortunately, Mark-Viverito made it all about her: you don’t know who I am? Is an “elected” a new protected class? Is her sense of self-importance so out of control?

If Mark-Viverito had called 311 or emailed the DOT commissioner and not gotten results, a tweet would certainly have been appropriate. But we’d like to suggest to Mark-Viverito that a public servant—yes, that is the more appropriate word for an “elected”—is here to serve, not to huff or berate. And that includes disparaging interns. 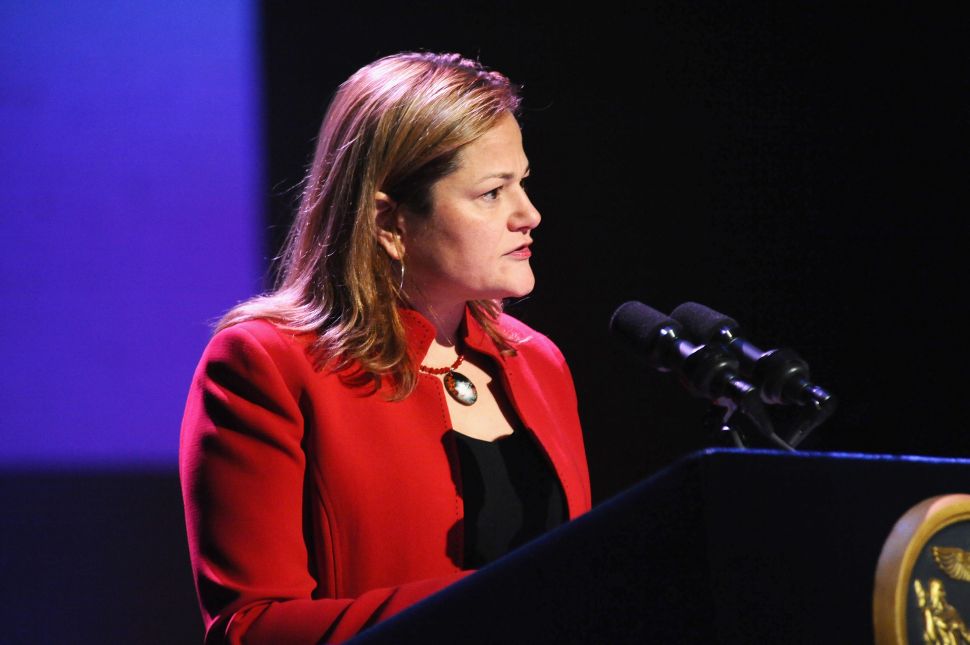