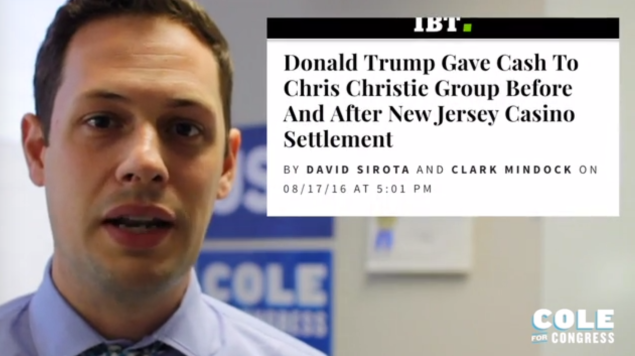 A congressional candidate going after the seat of longtime New Jersey incumbent Frank LoBiondo is doubling down on previous attacks against the Republican U.S. representative in light of a recent report on the generous settlement Republican presidential nominee Donald Trump received from Governor Chris Christie on his debt in Atlantic City.

LoBiondo, whose district encompasses the ailing casino capital, has faced sustained attacks from Democratic newcomer Dave Cole for accepting campaign donations from Trump during the 1990s. That period marked the beginning of Trump’s ongoing bankruptcies, which have played a part in the resort town’s decline due to out-of-state competition.

In a new campaign video, Cole tries to deepen the LoBiondo-Trump connection by accusing them both of dirty campaign finance dealings. He points to a recent New York Times story that showed Trump paying just 17 cents on the dollar for his Atlantic City casinos’ combined $30 million tax debt. After contributing to Christie’s campaign, Trump saw that sum dwindle to $5 million after Christie took office.

“This is the same thing we’ve seen repeatedly from Donald Trump’s businesses across South Jersey, here especially in the Atlantic City area,” Cole says to the camera. “This is our politics at its worst.”

Trump’s foundation made donations to the Drumthwacket foundation after Christie became its honorary chairman, and to the Republican Governor’s Association during Christie tenure as chairman.

Cole goes on to insinuate that LoBiondo is hoping for a similar politically expedient alliance with Trump.

“He makes political investments in candidates that he thinks will pay off and return favors for him,” he goes on to say of Trump. “I don’t know how you get those checks when you know Donald Trump is crushing the local economy here, and you cash them. And you think that’s OK.”

LoBiondo, for his part, has called Cole’s accusations baseless. At a recent chamber of commerce event in the district, he pointed to Trump’s longtime support of prominent Democrats like Hillary Clinton and Joe Biden. 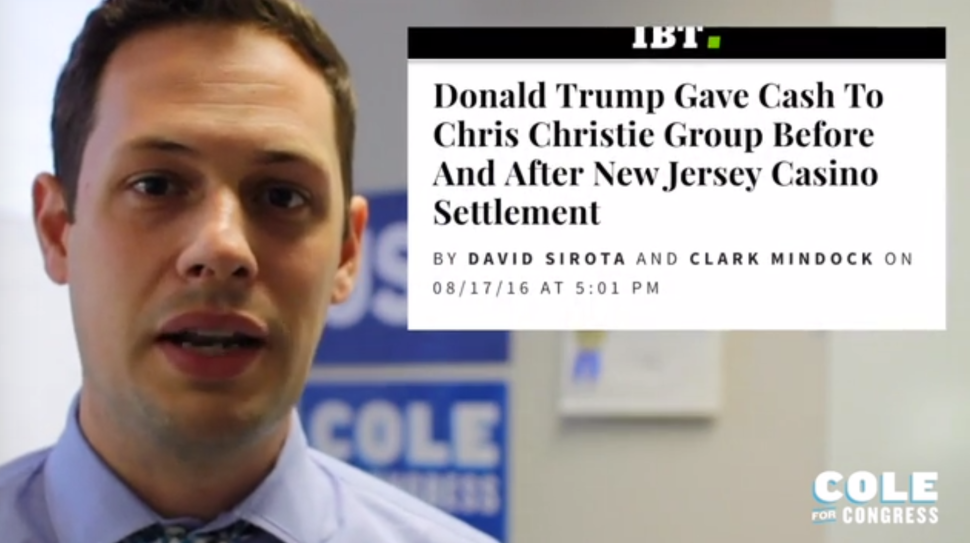