An unconventional group converged for lunch yesterday. Tom Colicchio, Bobby Flay, Adrian Grenier and Common all sat in a row at The Refinery Rooftop to give their two cents about the newly adopted concept of food deserts—not desserts as Flay had admitted to reading incorrectly when he was first introduced to this idea of an area in which it’s difficult to buy affordable or good-quality fresh food. “I dropped out of college, so I don’t read very well,” the internationally renowned chef joked. Naked Juice had assembled each of these talented gents to promote the juice empire’s newest charitable initiative, #DrinkGoodDoGood, in partnership with national nonprofit Wholesome Wave, founded by James Beard award-winning chef Michel Nischan.

“She really gave me a sense of the range of flavors beyond fried or salty or sweet,” Grenier said of his mother, whom he credits for actively seeking out nutritious ingredients for their meals. “Of course I love those things too, but when I sit down in front of a fresh fruit or vegetable, I also get excited. It wasn’t until I got older that I realized I was growing up in a food desert, right here in New York City. It’s really shocking how much lack of understanding there is for this problem. One in 10 Americans lives in a food desert, and they don’t even know it.”

Rapper Common credited his initial interest in healthy living to the music he grew up listening to. “Fortunately I listened to hip-hop music, which was my first introduction I had to thinking about changing my diet,” he recalled. “Songs would talk about not eating foods, so it made me seek out information about not eating these certain foods and eating healthier. So I made a conscious decision to start removing certain foods from my diet and seeing how I felt. I was thinking clearer, and I was even rapping better. It was from my own research. It wasn’t anything someone was telling me, but I felt it within myself.”

Before lunching on a set of predominately veggie-based, family-style dishes, the group crowded at the handle of a selfie stick to launch the #DrinkGoodDoGood campaign in which each selfie posted with the hashtag triggers a 10 pound donation of fresh fruits and vegetables from Naked Juice, although the brand had already pledged 250,000 pounds at the start of the afternoon festivities. 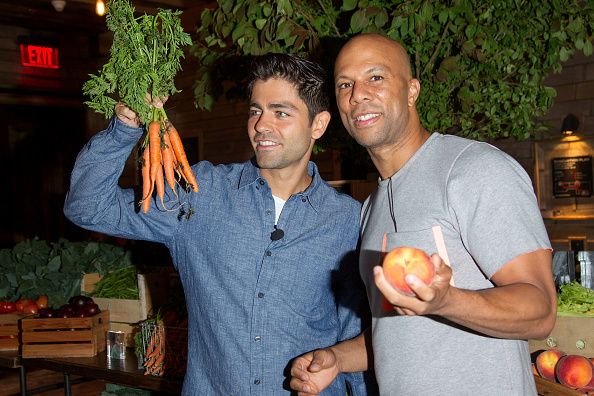