Following the fatal shootings of the imam of an Ozone Park mosque and his assistant over the weekend, Mayor Bill de Blasio assured the city’s Muslim community that justice would be served and condemned the hate and division he said is being spewed throughout the country.

Imam Maulama Akonjee, 55, and his friend and assistant Thara Uddin, 64, were walking northbound on 79th Street when they were approached from behind by a man with medium complexion dressed in a dark polo shirt and shorts as they were turning onto Liberty Avenue near the Al-Furqan Jame Mosque in Ozone Park, according to the NYPD.

After shooting them, the man fled the scene with a gun in his hand, the NYPD said.

Though multiple reports claim the police have arrested a suspect and are currently questioning him, an NYPD spokesman would only say that a press conference will take place at the NYPD headquarters at One Police Plaza at 6 p.m.

The service, which took place in the blistering heat in a Brooklyn parking lot, was marked by numerous Muslim community members and protesters yelling and screaming for justice. At one point during the service, several people shouted, “We want justice!”

The mayor, who was just coming back from Connecticut, announced he would be speaking at the service at 20 minutes before noon. He told attendees that the entire city is “mourning with you” and that the deaths are a “time of pain” for everyone regardless of people’s faith or where they live in the city.

“When we see two innocent men, two good men, two men of the cloth killed in such a violent manner, it pulls at all our hearts, all our souls and we too are focused on justice,” de Blasio said. “And we know for sure that two good men, two admirable men, two men who are looked up to in this community, who taught, who uplifted, who guided, have been lost and we feel the emptiness and the sense of pain now.”

He also condemned what he said were attempts to encourage hate against the Muslim community, likely referring to Republican presidential nominee Donald Trump’s proposal to ban Muslims from entering the United States.

“We know there are voices all over this country who are spewing hate, trying to create division, trying to turn one American against another,” de Blasio continued. “I look around at all my brothers and sisters here, I see proud Americans, I see proud New Yorkers and we’re not going to let them continue to encourage acts of hatred. We will stand up to them each and every time.”

He noted that the NYPD would be adding additional security presence for all mosques throughout the city. But what got him roaring applause from angry Muslim community members when he promised justice would be served: “We will make sure that whoever did this is brought to justice. I can guarantee you that,” he said.

“Since this horrible tragedy, the NYPD has been expending every resource and will continue to,” de Blasio added. “I want you to know that not only will we find this killer and find the cause and tell the people but you will see in the Muslim communities of our city, NYPD there in support of the community. You will see today and in the days thereafter.”

Public Advocate Letitia James, who hosted her first-ever town hall on anti-Muslim bullying in June at the Islamic Circle of North America in Queens, described Akonjee as a “peacemaker, a man of faith” and Uddin as a “loyal friend” and said she wants justice for the Muslim community.

“I am here today as the New York City public advocate who will never, ever abandon the Muslim community,” James said. “Today, we pray and we mourn but tomorrow, we will again join together to demand justice and we will work to build  a city and country where everyone is protected and we are all tolerated. And we will send the message throughout this country that love trumps hate each and every time.”

Comptroller Scott Stringer said the tragedy causes grief not only for the congregants of the mosque or the Muslim community but affects all New Yorkers. He stressed that the circumstances surrounding the crime are clear-cut.

“There’s no debating some of the facts here: two community religious leaders were killed in cold blood in broad daylight on a sidewalk in Queens,” Stringer said. “In an instant, two families lost fathers, a mosque lost an imam and his assistant and the Muslim American family lost two dedicated leaders.”

The Muslim community’s demands for the mayor and the NYPD include the NYPD making an effort to identify the shooter, the department’s Hate Crimes Unit investing the shooting, a request that the NYPD not send the public mixed messages about the cause of the crime and constant communication with the family.

The demands also include a minimum $50,000 reward for anyone with information about the shooter, security cameras around mosques and for the street where the crime occurred to be renamed after the victims.

The Islamic Leadership Council of New York, which organized the Islamic funeral prayer in Brooklyn, has pledged $10,000 as an additional donation to the two families of the victims and has also launched a GoFundMe campaign to support the families. The council also set up a committee to communicate with the victims’ families and with local leadership.

The Islamic Circle of North America and the Muslim American Society have each pledged to offer $5,000 to each of the families as well. 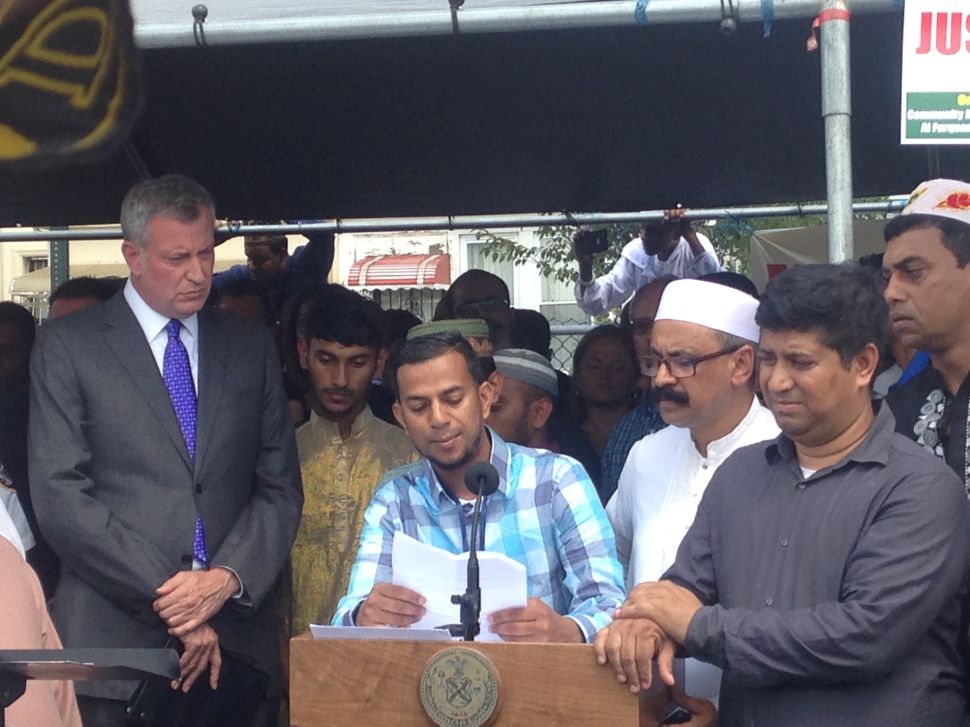