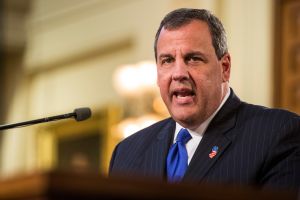 Chris Christie “flat out lied” about who was involved in Bridgegate. Andrew Burton/Getty Images

Gov. Chris Christie “flat out lied” about his aides being involved in the George Washington Bridge Scandal, according to text messages exchanged between aides disclosed in a new court filing. The texts refer to a December 2013 press conference where Christie told reporters that none of his staff was involved in the lane closures at the George Washington Bridge three months prior. As he spoke, staffers Christina Renna and Peter Sheridan exchanged text messages that directly contradicted what the governor was saying, and named top aide Bill Stepien as having a role in the incident. The exchange was revealed after Sheridan turned the material over to investigators. (Gothamist)

A sidewalk bookseller long known for his massive display on one of the Upper West Side’s most congested sidewalks has amassed nearly 200 summonses over the years for violating vendor regulations. Vendor Kirk Davidson has been at the center of legal trouble for decades, accumulating violations like occupying excessive sidewalk space and leaving books unattended, as well as fights with vendors. Davidson has managed to preserve his bookselling business despite numerous cycles of police officers, local officials and residents who have tried to oust him. (New York Times)

More than 13 teens attending a Snoop Dog concert on Long Island were hospitalized on Tuesday night for alcohol intoxication, police said. Police and paramedics scrambled to the Jones Beach Amphitheater after receiving reports of young concertgoers passing out, including one 15-year-old who was said to be unresponsive. The teens were taken to local hospitals for alcohol intoxication, though even more were treated at the concert. (NBC New York)

The father of slain Howard Beach jogger Karina Vetrano announced the launch of a GoFundMe page in hopes of raising a $100,000 reward for information about her fugitive killer. The Karina Vetrano Memorial Reward Fund page has already amassed more than $30,000 from nearly 300 donors after it was launched Tuesday night. The NYPD has also posted a $20,000 reward, but organizers are hoping the extra money will produce new information. Police have yet to make an arrest eight days after her murder. (Daily News)

Gov. Andrew Cuomo had a few choice words for state Comptroller Thomas DiNapoli on Tuesday, calling out DiNapoli and blaming the state legislature for driving businesses out of New York. The statement comes just days after DiNapoli criticized Cuomo’s economic development plans for giving unqualified businesses tax breaks. Cuomo said the Comptroller was “dead wrong” and “should educate himself” on the area. (New York Post)