Is an oppressive heat wave like last weekend’s a deterrent to opera? It depends. A superb performance can justify a day trip up the Hudson, but a less exalted presentation seems hardly worth the subway ride to Murray Hill.

The final and appropriately climactic concert of the 2016 Bard Music Festival might have been called “Deuling Turandots,” but the title of Sunday afternoon’s presentation at the Annandale-on-Hudson campus was the more thoughtful “The Turandot Project.”  The program offered contrasting settings of the “Turandot” tale, both adaptations of the stylized 1762 comedy by Carlo Gozzi about a cruel Chinese princess who challenges her suitors to a deadly game of riddles.

The first half of the program featured Ferruccio Busoni’s 1917 opera, a tuneful and gorgeously orchestrated piece that puts an ironic spin on the bloody tale. Next came the problematic third act of Puccini’s 1924 work, left unfinished when the composer died before he could come up with an emotionally satisfying ending for his darker take on the story. Instead of using the standard finale cobbled together by Puccini’s contemporary Franco Alfano, this concert offered the rare opportunity to hear Luciano Berio’s eerie postmodern completion from 2001.

Described this way, the program may sound a little dry and “musicological.” In fact, though, it was as deeply moving and disturbing an opera performance as I’ve heard this season, thanks to a subtle but devastating staging by director R. B. Schlather. The singers, all in modern evening dress, inhabited a narrow strip at the front of the stage bounded by a low bench-like railing. Here they sat, in character and reacting, until their cues to sing.

This minimalist scheme paid off effectively in the Busoni but utterly transformed the Puccini/Berio. The issue that stalled Puccini was the extreme pathos of the slave Liù, who sacrifices her life so that the hero Calaf can win Turandot. How can we care about them when we have just witnessed the death of the most sympathetic character in the opera? In Schlather’s staging, soprano Cecilia Violetta López as Liù climbed on the railing and sang her final aria not sentimentally, as is usually done, but aggressively, backing Turandot into a corner as she asked, in effect, “Are you brave enough to risk falling in love?”

And what, after all, is this “love” everyone keeps singing about and dying for? As Schlather demonstrated, it’s not about the noisy orgasm but rather the gentle comfort of resting a weary head on the shoulder of a long-time partner. As Berio’s ambiguous final pages eased into a quietly shimmering E-flat major chord, Turandot and Calaf (soprano Melody Moore and tenor Russell Thomas) sat, their backs to the audience, in a moment of quiet intimacy. It seemed the happiest ending any of us could wish for.

The highlight of the afternoon was Thomas’s performance of that most famous of all Puccini arias, “Nessun dorma,” to which he brought an ideal combination of stentorian power and rich legato. If Moore had fewer purely vocal opportunities in this program, she did flaunt a vast range and searing top notes as well as a command of resting bitch face to rival that of Warner Brothers-era Joan Crawford. Among the strong casts for the two works, a standout was Steven LaBrie, whose sunny baritone proved equally handsome as Busoni’s comic sidekick Barak and Puccini’s scheming courtier Ping.

The program also offered redemption of sorts for music director and conductor Leon Botstein, whose tight, unbending leadership of the American Symphony Orchestra in Puccini blossomed into a kaleidoscope of nuanced color in both Busoni and Berio.

Perhaps Saturday evening’s performance of Verdi’s La Traviata by dell’arte Opera Ensemble would have felt more satisfying if not witnessed in contrast to the ambitious Bard program. As a performance opportunity for emerging singers, it may have served its purpose, but there was here little either musically or theatrically to excite.

On the other hand, there is a good deal to be said for a performance that runs as smoothly as this one did. In the tiny Nagelberg Theater of the Baruch Performing Arts Center, the chamber orchestra conducted by John Spencer IV may have sounded a trifle lean in tone, but their ensemble and tuning were spot-on. The stage direction by Kyle Pfortmiller concentrated on dramatically apt tableaux, and he did succeed in instilling in his performers the value of stillness onstage.

Best of the singers was baritone Jeremiah Johnson as Germont, whose warm tone and easy legato more than compensated for a stiff stage demeanor. Less successful in the title role was soprano Bonnie Frauenthal, who gave what amounted to an understudy’s performance in a star part. Most of the vocal and acting boxes were ticked, but the magic never happened.

Magic, it seems, is impossible without risk.  And without the promise of magic, what’s the point of leaving your air-conditioned living room? 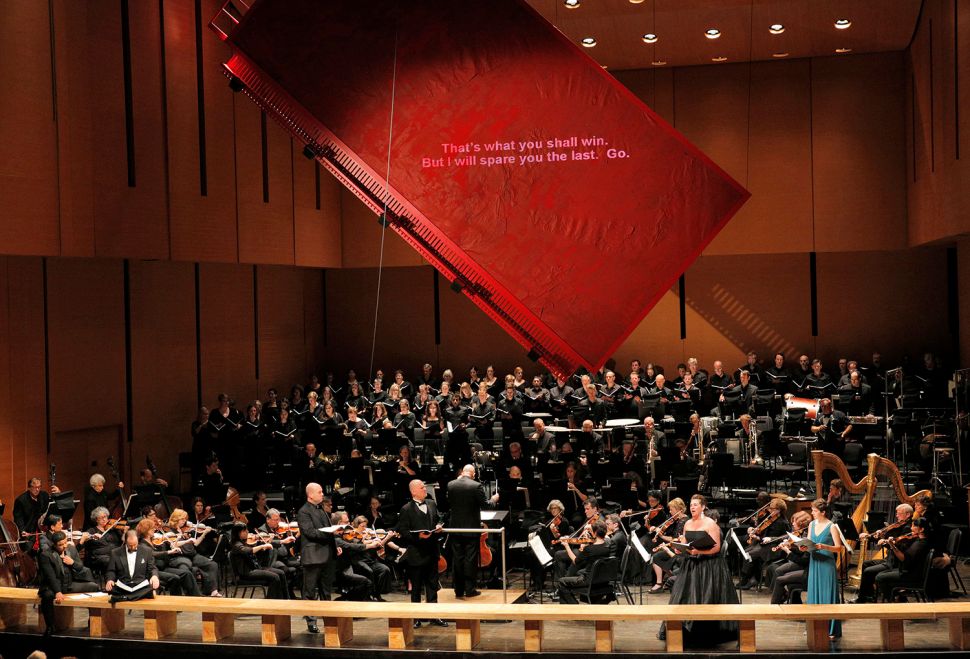