Bernie Sanders took his campaign for progressivism and populism to the Democratic convention and emerged with a strong commitment to party unity, a powerful progressive party platform and a new Democratic National Committee.

‘Bernie or Bust’ is bye-bye.  The Democrats have come together, Hillary Clinton is pulling further ahead of Donald Trump, and Democratic chances for regaining control of the Senate and gaining a significant number of House seats are on the rise.

Donald Trump took his campaign of insults to the Republican National Convention, painted a dark and gloomy picture of America, emerged from the convention to increasingly direct his insults against leading Republicans, has caused a virtual panic among GOP insiders about the imploding state of his campaign, and instead of winning the support of Sanders supporters finds himself facing a growing number of Republicans endorsing Hillary Clinton.

When the history books of the 2016 campaign are written Bernie Sanders will emerge as one of the big winners, and when the 2018 Congressional campaign and the 2020 presidential campaign begin Sanders and his supporters will emerge as perhaps the single greatest influence on the future of the Democratic party and possibly the nation.

In the most important sense the 2016 campaign has been a battle between Bernie Sanders and Donald Trump for the mantle of leader of the anti-establishment populism that is the dominant strain of public opinion in America. Sanders won that battle by a knockout, leading Trump in match-up polls throughout the campaign by head-to-head margins that were usually between 10 and 20 percent, a point not lost on Hillary Clinton, who has steadily moved toward the populist left from the place she began the campaign long ago.

Clinton is far from the perfect or preferred champion of the left in presidential politics.

That title belongs to Sanders and Elizabeth Warren. But in the Democratic party platform and the removal of Debbie Wasserman Schultz as national Democratic chair, Clinton has met Sanders more than halfway, and Sanders brilliantly used the convention as a place to promote his progressive ideas while bringing Democrats together in support of Hillary Clinton and progressives running for the House and Senate in November.

Bernie or Bust is over. It is not a movement; it has shrunk to a small and insignificant group of outliers who will have no impact on the election returns. While 95 percent or more of Bernie’s primary supporters will vote for Hillary Clinton in November, the few remaining Bernie or Bust types are reduced to talking about Wikileaks, the operation used by Russian dictator and strongman Vladimir Putin to elect his favored candidate, Donald Trump.

A number of times I have found myself debating conservatives on television and asking them: aren’t you uncomfortable being allied with Vladimir Putin, who according to most intelligence analysts is engaging in espionage in a virtual undeclared cyberwar and information war against America to illegally obtain and then leak information to defeat Clinton and elect Trump?

When I ask this question my conservative friends squirm like worms on a hot brick in the summertime. They desperately try to change the subject because they know I am right and cannot defend their position. I would ask the same question to the handful of Bernie or Bust people who remain.

Compare the actions of Sanders and Trump on their party platforms. The major innovation in the GOP platform from the Trump forces was a provision of appeasement to Putin that would prevent stronger aid to Ukraine to defend against Putin’s attempt to impose a friendly government in Ukraine after Russia annexed Crimea. No one close to Trump would take credit for this provision that mysteriously appeared, while Trump himself has suggested that Crimeans wanted to be annexed by Russia and incredibly claimed that Putin and Russia are not “in Ukraine.”

Bernie Sanders, by contrast, proposed and won provisions in the Democratic platform that would offer free public college and university education to tens of millions of American students, fight for a public option in healthcare that would be a major advance toward a single payer system, and take stronger action to break up big banks, among other major progressive proposals Sanders won in the platform.

Compare the political stances taken by Sanders and Trump at the conventions, and after them. Sanders at and after the Democratic convention gave a rousing call for party unity and a political crusade against the bitterly divisive politics of Trump, and succeeded in rallying most of his supporters behind Clinton and his campaign to elect progressive Democrats in November.

By contrast Trump has increasingly aimed his politics of insults against Republicans. He has harshly criticized Republican Senate Majority Leader Mitch McConnell, saying McConnell is 100 percent wrong in his support for NATO against a Russian invasion. He has criticized House Speaker Paul Ryan and refused to support his campaign for reelection.

Not content with insulting the Republican leaders of the House and Senate, Trump continues to insult Sen. John McCain, one of America’s leading war heroes in politics and the GOP’s nominee for president in 2008, saying incredibly that McCain is not a strong advocate for veterans and refusing to support him for reelection. To add insult to insult, Trump proceeded to criticize and refuse to support Republican Sen. Kelly Ayotte of New Hampshire, who is embroiled in a tough reelection campaign.

While Bernie Sanders promotes party unity and progressive values in the best traditions of the Democratic party, Donald Trump divides the Republican party by attacking leading Republicans and finds himself supporting policies of appeasement to a Russian dictator in ways that are anathema to conservative values and would be deplored by great conservatives from Winston Churchill to Ronald Reagan.

While Sanders rouses his supporters to elect more liberal Democrats to the House and Senate, Trump announces which Republicans he insults and refuses to support.

The finest hour for Bernie Sanders will be that on the morning after the election, when he will probably be sharing the triumph of a Democratic victory and marching to continue his revolution in the elections of 2018 and 2020—while Republicans will be asking how in the hell they ever nominated Donald Trump and who they should blame for the debacle of their 2016 campaign. 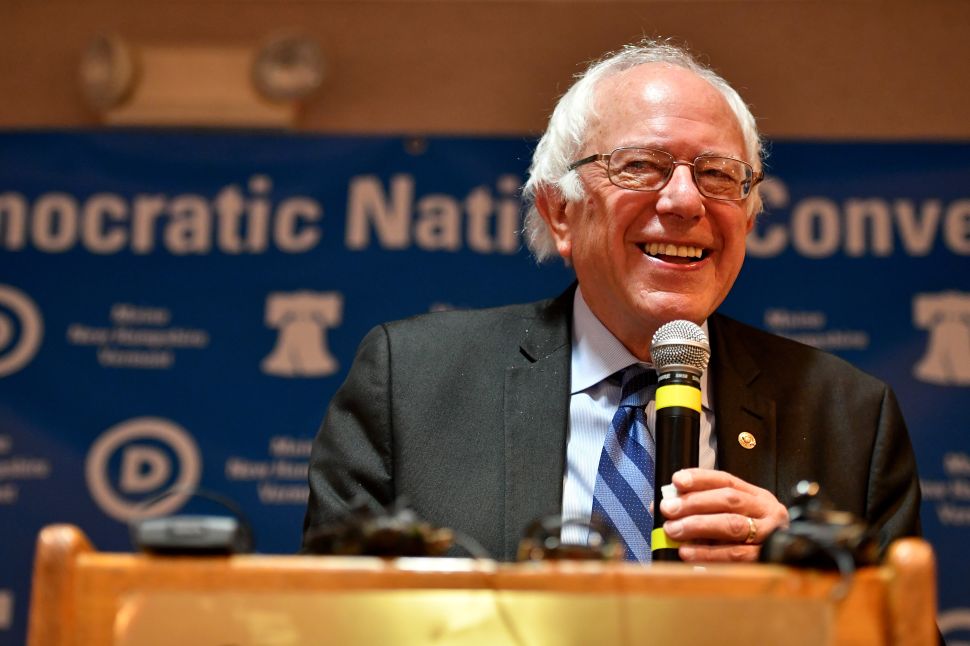