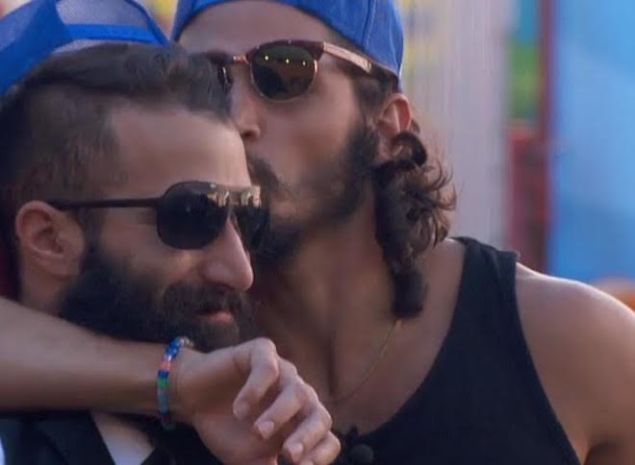 Four episode weeks of Big Brother are like going into your favorite local old-timey diner straight out of a Stephen King novel except instead of a rabbit hole in the back, they deliver you a perfect slice of heaven. Even when one of the episodes is total flashback filler. It doesn’t matter to me. More eps please. Give me seven days a week of Victor trying to throw darts and then fifteen minutes later Paul being like “remember that time Victor couldn’t throw the darts?” and then they flashback to it like that episode in the first season of Diff’rent Strokes where they have the kids sitting around the apartment with Mr. Drummond and they talk about how crazy life was before they moved in like three weeks ago and Arnold runs the full length of the tv set and jump into a bathtub. The segues on these clip shows are always the absolute best part, especially when by this point you’ve watched about ten thousand hours of these people talking and interacting naturally and then all of a sudden have to feed them lines like “oh look a kissing booth, you know we sure did have a lot of romance in the house this season…<pause for reaction>…like showmances were in the air.” Compare these contrived convos with the true interactions of the house like Victor leaning over to kiss Paul’s forehead during the Ziggy Marley performance, which was a top five moment of the season for me.

The HoH competition this week took place inside this giant black box, in the dark, where the houseguests ended up covered in some kind of neon-colored molasses and feathered while trying to collect the most amount of rings. It combined the best elements of an endurance comp because they had to hold a button for a lot of the time but also an athletic comp because they had to grab the rings in thirty second intervals. And it was all in the dark. It looks easy in the nightvision but doing anything in the dark is like twenty times harder, especially if you’ve just finished watching Stranger Things and this dark box you’re in starts to feel like The Vale of Shadows with all kinds of giants death specks floating in the air. These houseguests don’t get Netflix but I’ve slept with the lights on in my room for the last four nights because I’ve never trusted walls to be just walls and not doorways into literal hell. Dante’s Inferno isn’t fiction, it’s a prophecy.

Natalie wins HoH, beating Corey by four seconds but then America’s Care Package goes to Michelle and she becomes co-HoH which should have actually been immediately stripped away from her because she 1) couldn’t open the box forever. If Michelle was Morgan Freeman’s character in Se7en, Brad Pitt still wouldn’t know what’s in the box because it still wouldn’t be open twenty one years later. 2) Michelle reads her prize as C-O-H-O-H and not “co-HoH.” Michelle and Natalie conspire and Nat noms Victor with Michelle putting Paul up. Natalie tells Victor she wants him to win veto and pull himself off so Paul knows the target is squarely on his back. Nicole told Natalie that Paul was going to go after James and so that’s why she shifted her target over to him and way from Nicole and Corey. Paul called out Nicole after nominations and also right after Corey got called in the Diary Room. The two of them were arguing when Corey burst back in doing a strip-tease to take off his American Flag unitard. Corey’s lack of ability to read a conversation is on-par with Ned Reirson. Take the hint, bing.

After that, the house had a series of blowups. Paul convinced Natalie that he never was going after James so she wanted him to win the veto and stay. They were all staying up together to study the clues that were being given all night. But then after the clues were all given, Paul fell asleep in the HoH bed so Natalie couldn’t relax and get ready in there and then Natalie wanted him to lose and go home. Imagine going home because you fell asleep in some else’s bed? It’s like inDangerous Minds when Emilio dies because he forgot to knock before going into the Principal’s office. Paul won the veto in a comp that had the houseguests outside in a simulated monsoon, getting slapped in the face with debris and foam street signs. After Paul took himself down, he and Victor came up with a plan that involved faking a fallout between the two of them. Paul buddied up with Corey and Nicole hoping that James would vote to save Victor. People seemed to buy it but nobody realized that James has been working with Nicole and Corey and wanted them to stay. Victor went home BUT there was another battle back competition this week for everyone in the jury house.

Paulie showed up at jury to Z, Da’Vonne, and Bridgette all hating him so Paulie really needs to get out of there. He keeps calling the girls catty and maintaining his “I’m the man-ness” so I don’t want him back in the game. But for his sake, he needs it. Of course, nobody wants to face Vic in a competition and he’ll have a great shot at returning. Nobody eliminated has ever gone on to win, so nobody eliminated twice has done it either. There’s one more America’s Care Package but it’s kind of lame, it’s where you have five thousand dollars that you can transfer to another player, so theoretically you can use it for bribes and stuff but it never really works out that well. We’ll find out who got back into the house and who won HoH on Sunday, with nominations. Veto Wednesday. Another eviction Thursday. 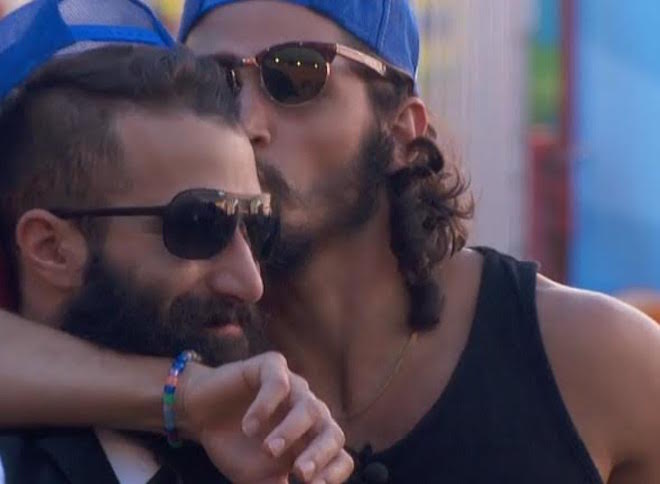