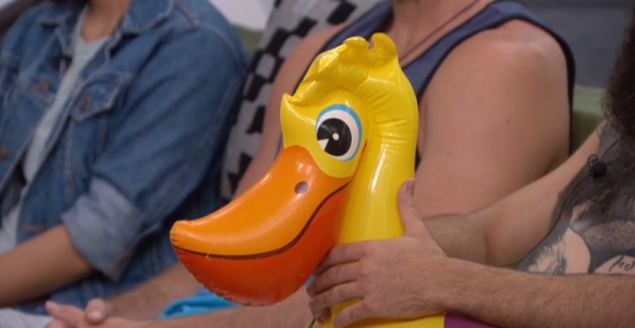 The Olympics are on right now which makes it incredibly hard to watch lots of television, especially when CBS preempts the Big Brother Thursday night live show for a garbage pre-season New York Trashcan Men football game. But the thing I love most about the Olympics are this: storylines, competition, and victory. All reasons why I love Big Brother. What a coincidence. It’s like having a mini-Olympic games every week of every summer.

This week in the Big Brother house had all the emotion of elite competition. Remember in 1996 when Kerri Strug hit that vault on one bad ankle and she cried and her coach cried and all of America cried like they just told the class Emilio died in Dangerous Minds?
[youtube https://www.youtube.com/watch?v=7ZRYiOa5lM8&w=560&h=315%5D
Well Michelle cried like that all week. Michelle is the Michael Phelps of the loud wailing moan sob. The HoH comp this week involved everyone standing on a small round wooden platform attached to a rope, which spins you right round baby right round like a record. Michelle managed to hold on for a while but then she got dizzy. And then she got nauseous. And then she started to throw up from her platform all over the mats below them. The Final Five Olympic gymnastics team talked about feeling like they were going to throw up during the prelims but Michelle actually did it. Gold medal vomiting for Michelle. The best part was that CBS bleeped it out. So Michelle was heaving, open mouthed and all that was coming out of her was a pixelated blob. I’ve talked about the four vomit rule in these parts before. But I caught some of this on the live feed and it was pretty good. I wish we got to see some of it. But no more than four.

So Michelle throws up all over the place and then drops down and starts to cry. Is she crying because she lost? A little bit. But mostly she’s crying because she feels bad for whoever has to clean up her mess. This added a really entertaining extra layer to the comp because not only were people trying hard to not drop, but then they had to work extra to make sure they didn’t land in Michelle’s throw up. Nicole almost landed it and then nearly crawled through some more of it. Victor outlasted Natalie to take the HoH and complete his incredible return after being evicted a couple of weeks ago.

Vic’s win would lead to another huge moment of crying from Michelle. The guys, Paulie, Paul, Victor, James, and Corey formed a new alliance called The Executives. Paul and Victor wanted to go after Z because she threw out Paul’s name to Paulie last week and Paulie gave the okay to eliminate her because Z is scam even though they are in a showmance. Paulie is very cavalier in talking about not really caring about Z. It’s not a good look on him. And Paulie was worried that Z was going to come after him after he lead Da’Vonne’s blindside eviction without telling Z it was happening. Paulie waited a whole twelve seconds after Z dropped out of the spinning HoH to quit himself and Z thought that looked suspicious. Mostly because it was supremely suspicious. So Vic nominated Michelle and Z but not in any ordinary fashion. He decided to rock the HoH bathrobe and deliver it via rhyming poem. I mean theoretically you can call it “rhyming” if you consider “fell” and “felt” or “affection” and “attention” to be rhymes (they aren’t). Victor slid some beads across the table at both of them. Michelle’s fell off and went right into her lap right as she began to break down sobbing. All the guys in the house were trying super hard not to laugh. To quote Paul quoting the classic Sega Genesis game Toejam and Earl “everyone in this house is a weiner.”

Paulie won the veto in the Hide and Go Veto comp which is the dopest excuse to wreck the house. James was throwing raw eggs around and throwing bowls, very typs James. Poor Vic hid his veto card in someone’s bag because he didn’t think anyone would go through somebody’s stuff. It might’ve been the worst hiding spot in the history of the game. In the meantime, James is dumping drawers out and Rick Jamesing your white couch. Paulie hid his card in a spot inside the kitchen table that took three people to help him get it out so yah it was a good spot. But Paulie didn’t take Z down with the veto.

All week it was a back and forth between Paul and Paulie about who to get out. Paulie was still trying to go after Michelle. At least people are finally recognizing that Paulie is a huge threat. Bridgette starting chirping in ears about Paulie running the house. Paul even wised up that their two-man alliance is only helping Paulie out. Paul is doing the back scratching but isn’t getting his back scratched. Give my man some scratches. Paulie was trained by Derrick for this game and while he’s not pulling off Derrick’s under-the-radar moves, the blueprint is the same. Remember how Derrick seamlessly went from a chubby undercover cop dad to leader of the fun-time millennial youth crew? That’s what Paulie did by becoming Paul Jr. Perhaps now that the transformation is complete, Paulie is jealous that Paul has been spending a lot of time with a new houseguest. Yes, Paul’s new best friend is a duck inner tube he wears around the house like Wade from U.S. Acres.

Bridgette and Michelle manage to unite the house against Paulie. If they can’t get him this week, they can still go for Z. Even Paul agrees to let James use his BB Care Package of nullifying two votes on him. So Z is eliminated. Corey and Nicole are blindsided because they weren’t in the loop and wanted Michelle to go. And Paulie is stuck. But double eviction weeks are chaos. Corey manages to pull off an HoH win after only two questions are asked. He pulls together The Executives to make sure they’re all on the same page. They are not but for appearances they all go with it. Corey nominates Bridgette and Michelle. The target is Bridgette but Michelle blisters the voters thinking she’s out for sure. Bridgette goes and Michelle does what? She weeps hard, not like George Harrison’s guitar at all. For staying. In fairness, she was sad to see Bridgette go I guess. In more fairness, it was mere weeks ago that she gave Bridgette a shoulder so cold it would’ve made the Night King shiver. Julie has to tell Michelle to calm down and take a breath. Simone Biles of bawling.

There’s still a return trip ticket at play but it’s about to expire. And next week’s Care Package is safety from elimination for the week (plus having to wear a silly costume, hopefully they bring back the unitard). Personally, I would vote for Paul’s duck inner tube to get the power. There’s also an extra Friday episode next week. Dope. 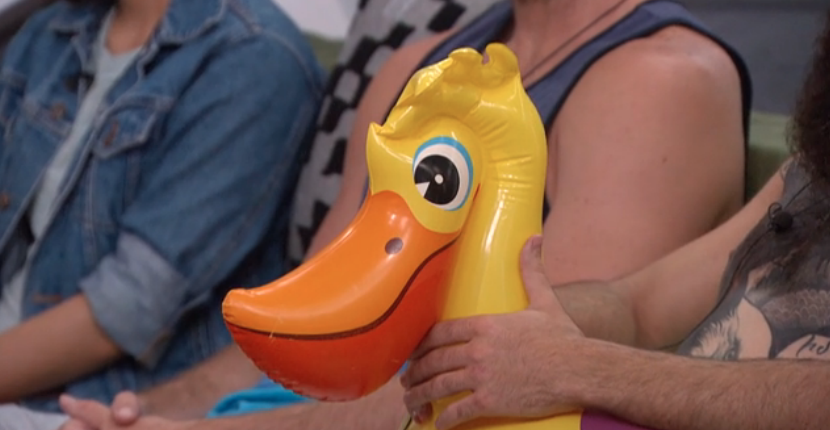