Police Commissioner Bill Bratton—who gave Mayor Bill de Blasio credibility on policing issues but also publicly disagreed with him at times—is stepping down as the leader of the NYPD, according to several news reports.

The mayor hastily added a noon press conference at City Hall to his public schedule this morning. The news of Bratton’s resignation comes before de Blasio’s 2017 re-election bid, when he might have been valuable to those skeptical of the police-reform-minded progressive mayor’s ability to keep crime down, but when it might have hurt him with liberals and minorities who have objected strongly to Bratton’s use of “broken windows” policing and his statements about Black Lives Matter protests.

Policing has been a flashpoint for de Blasio, and the last 24 hours alone provides a view into the mayor’s challenges with his police department—and the dynamics between the mayor and Bratton, who has been given much more leeway to publicly criticize and sometimes even undermine the mayor than any other commissioner or aide.

Yesterday, Occupy Wall Street-inspired protesters took to City Hall Park, where they vowed to stay put until de Blasio fired Bratton for a myriad of reasons, ranging from police shootings of black men to his efforts to crack down on quality of life crimes, which they argue has disproportionately hurt people of color. Meanwhile, Bratton was in the Bronx refusing to apologize after Assemblyman Michael Blake, who is black, said a police officer shoved him into gate for inquiring about an arrest. That was a markedly different position than the one his boss took—de Blasio did apologize. And this morning, the Patrolmen’s Benevolent Association, the union for rank-and-file cops whose members once turned their back on the mayor after two officers were assassinated, hounded de Blasio outside his gym in Park Slope over pay raises.

Yet for all the controversies, the city’s leading liberals praised the outgoing comissioner, recalling his service both under de Blasio and under former Mayor Rudolph Giuliani in the 1990s

“For the second time in as many decades, Commissioner Bill Bratton has led New York City’s finest, keeping our city and communities safe,” said Public Advocate Letitia James in a press release. “During his most recent tenure, crime has been at record lows, and I have been proud to work with Commissioner Bratton to usher in new technologies, such as body-worn cameras and ShotSpotter, to improve criminal justice policy. I thank Commissioner Bratton for his unwavering service to our city.”

“I thank Commissioner Bratton for his years of service to New York City and commend him for working hard to keep crime low and our city safe,” she said in a statement to the press.

Bratton had previously said he would not remain with the mayor through his second term, but an announcement was not expected this quickly. He will stay on through September, and the mayor announced Chief of Department James O’Neill will take his place.

His pioneering of the broken windows approach, which targets minor offenses, has been credited both with decreases in crime and increases incarceration.

Updated to include comment from James and Mark-Viverito, and to include greater information on Bratton’s planned departure. 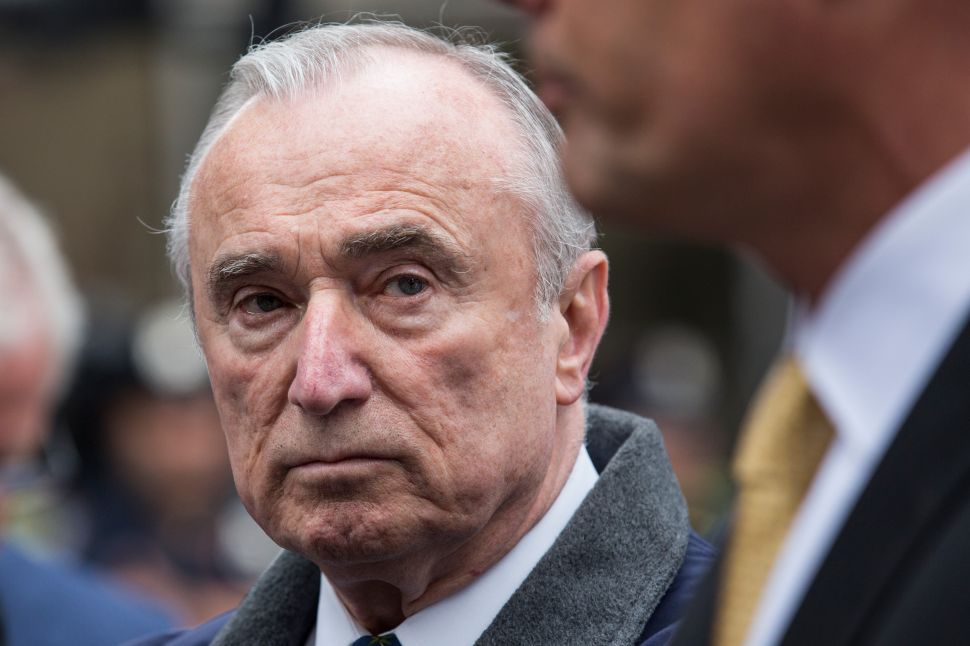