Mayor Bill de Blasio today defended the deal he made with the state in 2014 over the sale of Brooklyn’s Long Island College Hospital—days after reports surfaced that corruption-busting U.S. Attorney Preet Bharara had launched a probe into his office’s role into the arrangement.

Speaking after a announcing big gains on city school test scores at the Tweed Courthouse—a welcome and rare bit of good news for the administration—the mayor pleaded both ignorance and innocence about the investigation. The Daily News reported last week that Bharara’s office had sought communications between the State University of New York system, which owned the hospital, and a number of de Blasio aides and political advisors.

“I don’t know enough yet about any potential investigation into Long Island College Hospital. What I can tell you is a couple things—first off, we are absolutely ready to cooperate in every way. We did everything appropriately there,” he said. “Everything that happened there was appropriate, and if anyone wants to look into it, we’ll certainly work with them.”

As Public Advocate and aspiring mayor in 2013, de Blasio made the surrounding community’s cause his own, suing and protesting to keep the state from selling off the money-losing medical facility. On one occasion, the mayor intentionally and ostentatiously got himself arrested demonstrating outside SUNY Chancellor Nancy Zimpher’s Manhattan office.

But the lawsuits and protests ultimately failed, and once in office de Blasio abandoned his commitment to keep LICH running as a full-service hospital. Ultimately, he made a compromise deal with SUNY and with Gov. Andrew Cuomo—who effectively controls the state university system—that would allow a sale to go through, but retain an emergency room and some other medical services on-site.

Capalino is linked to another ongoing de Blasio scandal, involving the Rivington House, a former Lower East Side AIDS Hospice. A damning report the Department of Investigations released earlier this month found that Capalino, in the employ of the property’s owners, lobbied City Hall to lift deed restrictions that required the facility to operate as a healthcare nonprofit—allowing a developer to later convert the site into luxury housing.

Among those who also submitted a proposal for the LICH site was developer Don Peebles. Peebles later revealed that de Blasio sought a donation for his now-defunct Campaign for One New York nonprofit during the bidding process.

Peebles sent a $20,000 check, which the Campaign for One New York later refunded, without reporting it on any of its voluntary disclosures. The developer, a Florida resident, has since indicated his interest in challenging the mayor in 2017.

Bharara is currently investigating the Campaign for One New York, which good government groups labeled a “shadow government” during its existence. Critics asserted that the mayor’s nonprofits had created a “pay-to-play” environment where they could buy influence by donating to the organizations, which promoted the mayor’s agenda locally and on the state level.

The Campaign Finance Board rebuked de Blasio for the practice earlier this month, while conceding he had technically broken no laws.

The mayor maintained today that the final arrangement with Fortis was the best that anybody could have asked for at LICH—and that no contributions compromised his integrity.

“As I’ve made clear: when we looked at Long Island College Hospital, our goal was to preserve healthcare there. And only a plan that would actually work that preserved healthcare that was financially viable was acceptable to us, and had nothing to do with whatever anybody was doing with their First Amendment rights to give donations,” he said. “Most importantly, and I think this is the central question the public always wants to know is if ‘was a decision made because of the public interest, and no other factors?’ Absolutely.”

He also insisted he had “held consistent” throughout the fight over the hospital site, even though he had settled as mayor for less than he had demanded as a candidate.

“The more we looked into what could be achieved, and how would the actual economic realities work, and the finances work, the specific healthcare site that’s there now is the thing we came to believe was realistic and viable and sustainable for the long-term,” he said. “Sometimes in life, if you’re outside and you get to come in and look under the hood, does your point of view change? Sometimes it does.”

Still, he said this wasn’t one of those times. 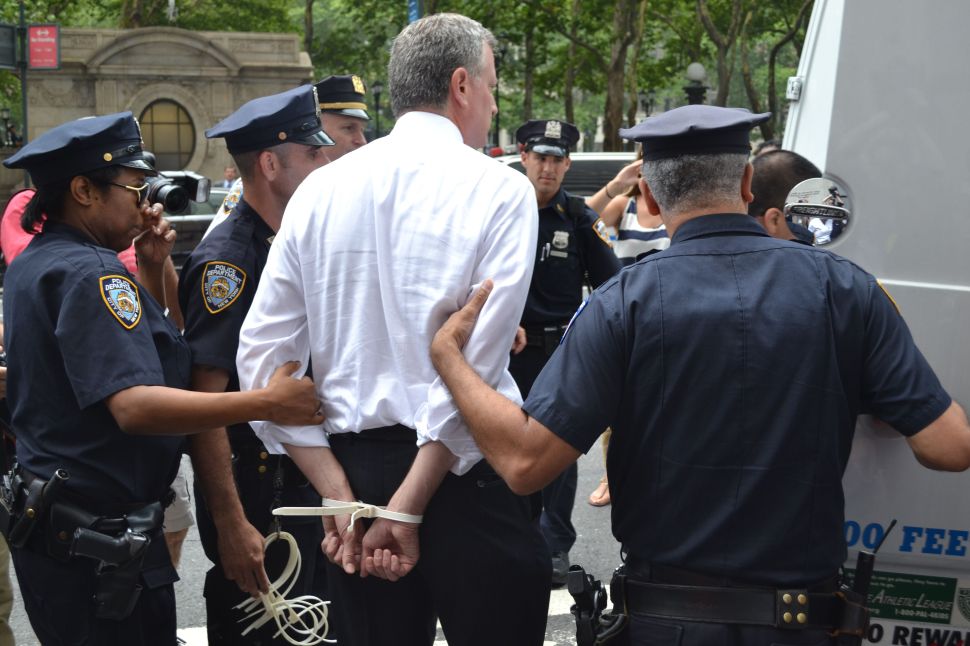