I have long detested the phrase “guilty pleasure,” especially when it is applied to music, art, films, books, TV shows, and other cultural ephemera. It presumes that the user has to feel bad for liking something; it assumes that a person believes their friends will think less of them if they admit they listen to something.

Listen: It’s O.K. to like BTO’s Greatest more than Amnesiac. You don’t need to make excuses to me, or anyone else. History has taught us that the only thing any music fan should feel guilty about is not outgrowing Elvis Costello by the time you finished your junior year at SUNY New Paltz.

Boston isn’t a guilty pleasure. It’s one of my 50 favorite albums.

Boston’s debut album, which turns 40 this month, is an absolute treasure of melody and architecture. It has the immediacy of pop, but also the deliberate intricacy of prog rock; it has California pop’s attention to zealous sweet harmony, yet it also has some of the heaviest and most memorable guitar riffs on the planet. Until the day Fu Manchu and the Moody Blues get together to re-record Days of Future Passed, it is sui generis.

Like the debut albums by the Ramones, the Velvet Underground and Neu!, it’s difficult to know where the hell Boston came from; it is so staggeringly unique, but also deeply rousing, resonant, aurally sensuous and pleasing.

And do not let its extraordinary commercial success (or our desire to confine it to the trash bin of ‘70s nostalgia, alongside Jimmy Carter, Chevy Chase and Mark Spitz) distract from its innovation or originality. Boston is a spy, a vastly unique spy in the house of memory, virtually as original and as individual as any of those more “credible” acts I just mentioned.

How do you describe Boston’s stunning, heavy/light planetarium bubblegum, this mix of garage rock memes and pure FM Valentine? I mean, it’s like freaking Paul Revere & the Raiders recording Dark Side of the Moon.

Boston may also be the pinnacle of the lost art of Artisanal Recording.

Prior to the ubiquity of computer-based recording technologies, records were made at massive console desks, with inputs feeding into giant, needy tape machines; this resulted in extraordinary achievements of patience, coordination, imagination, mystery and happy accident. Artisanal Recording describes times when the synchronization between artist and song and instrument and console desk and tape machine is so exacting and precise and inventive as to be virtually—if not literally—at the level of the finest renaissance craftsmen.

Boston, both track to track and in its entirety, is a piece where the studio—by which I mean the whole apparatus (console, tape machines, outboard gear, EQs, etcetera)—is an extra musician, a featured musician, and that musician is expertly, precisely directed by very, very skillful hands that do not play dice.

Although this remarkable record is full of intention, it is never pretentious, and the almost exotically unique skill behind Boston does not draw attention to itself. The fact that Boston and their master genius and controller, Tom Scholz, combined this science and art with extraordinary riffing, emotive, sensual, sensitive and muscular songs (and song after song after song), makes this one of the greatest albums of all time.

I can say, honestly, that an entire book could be written about Boston, or it could be the subject of an entire semester in a class in music production or music psychology. So, it’s hard to crack open the door just a little, but let’s talk a bit about “More Than A Feeling.”

“More Than A Feeling” opens the album with a fade in, which boldly and plainly announces it as a studio concoction. How many songs can you name that fade in? After the fade-in (often obscured on the radio) the first thing the listener is aware of is a shimmering, attentive arpeggio, an immediately identifiable signature that tells us very little about what’s to come, but announces that something very important is going on here.

The guitar sound on this arpeggio, like all the guitars in the song, is an expert mixture of multiple guitars (at least one acoustic and multiple electrics, and a balance of 12 strings and six strings) morphed into one faultless and unique whole. Throughout Boston, Scholz orchestrates guitars like a master tailor; you never see the seams.

From here on in “More Than A Feeling” we encounter a rare balance of mathematical precision and evocative contact with listener.

Very, very rarely has such cold meticulousness been so effectively utilized in the service of such a truly emotionally suggestive result. Every mix level on Boston is full of precise intent (for instance, the drum roll that signals the entry of the verse vocal on “Feeling” seems a little “hot,” but is clearly intentional, wakening the listener out of the slumber of the seductive arpeggio). Likewise, as the song moves from section to section, different guitars shift as needed, sluicing and gliding in and out without ever breaking the flow of the song or making the listener conscious of all the work going on. And then there’s…

And that freaking riff, one of the most famous in history, is coupled with that. Freaking. Guitar sound.

That sound is room-filling, like the joyous squeeze of a transistor radio heard in 5/1 surround sound, and it’s so distinctive yet delicious, like an ice cream shell over a Pete Townshend chord announced in a stage whisper.

Oddly, the Scholz/Boston guitar sound is a not-so-distant cousin of the sound Nick Lowe coaxed out of guitarist Brian James on the Damned’s debut album. Lowe also got a very tight, squashed, small-amp sound, but then had it play big chords and recorded it “cleanly.” The Damned album originally had a notice on it that said, “Made to be played loud at low volume,” and both Damned Damned Damned and Boston have the almost unique effect of sounding powerful and “loud” even when played quietly.

Tom Scholz’s guitar sound is a synthetic sound, and immediately identifiable as such; and although in the future, over-processed and synthetic guitar sounds would largely become, well, utterly disgusting to listen to (think of every hair-metal band of the 1980s), for one shining moment, this mix of man and machine and “Farmer John” is utterly perfect.

Here, friend, we delete another 880 words I wrote just on that. One. Song.

Instead, note this, which personifies a lot of what is going on with “Feeling” and Boston: at the very end of the song, while the piece is fading out, the bass does an octave drop for the first and only time. This is no accident, but something Scholz put in there to keep the listener engaged. Only the greatest pop-rock recordings can do this—make the listener feel enraptured by the story and the texture while inserting enough changes and “surprises” to keep the listener alert.

Of course, that’s far, far from the end of Boston’s glories, and they are to be found all over the album. Here’s just one of many: at the 5:24 point of “Foreplay/Long Time,” there’s an instrumental bridge (many of Boston’s bridges are purely instrumental) that is such a precise mixture of geek-satisfying prog soloing, absolutely genius simple Who/Move chording, and Abba/Floyd layered production that, heck, I could have written this whole damn article on just those 56 seconds.

This extraordinary, deeply spatial Byrds-in-Space-meets-Deep Purple playing side two of Abbey Road quality is consistent throughout every single moment of Boston, and enlivens even a paper-thin song like “Hitch A Ride”; in fact, it’s on a (relatively) minor track like this that you can really, really appreciate what’s going on, as Scholz juggles wildly disparate elements (Floyd-ish arpeggios, creative guitar-panning, sudden excursions into heavy prog, and Beatle-esque handclaps) so masterfully that you feel like you are listening to the sonic equivalent of Cirque de Soleil.

Boston is like Enya for Rock Band, baby, that’s what it is. Here’s what I mean by that: Enya (well, actually, her producer, Nicky Ryan) could take the freaking 1-877 Kars for Kids song and make you go, “Ohhhhaaaahh, I want to wrap myself in that forever, that sounds like eating Carvel while smoking Opium.”

The same damn thing is going on here with Scholz and Boston. Every moment on Boston is engaging, empathic, sonically sensual riff-rock-via-Higgs Boson gold.

And let’s not overlook the late Brad Delp. Without exerting very much in the way of character or attitude, on Boston he delivers one of the great rock vocal performances of all time. His pitch-precise, warm, soaring vocals are so perfectly synthetic/synthetically perfect that you have to remind yourself that this is all pre-auto tune, and that’s when you recognize the true magic going on.

What Boston did (or didn’t do) afterwards hardly matters (let’s just say that about a third of album No. 2, Don’t Look Back, achieves this transcendence, and from there it’s a slippery slope); Tom Scholz gave us this.

Boston is far, far more than a technical achievement, but it is an extreme technical achievement, and it is far more than an almost extraordinarily novel mixture of a decade’s worth of post-Kinks metal memes and pure sad, sugary memory-triggering AM/FM pop, but it’s certainly all of that, too. And it’s not just one of the greatest representations of the lost era of Artisanal Rock, though it’s certainly that, as well.

Boston is everything wrong and right about the first half of the 1970s made ecstatic, holy, deeply listenable, lovable, and timeless, never to be repeated, never to be truly imitated ever again. 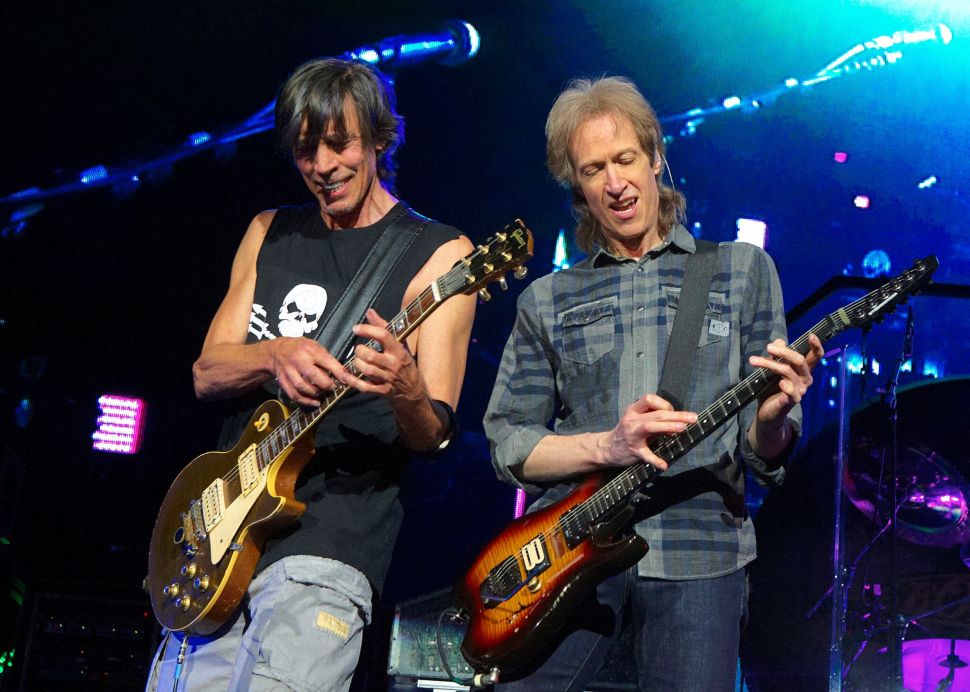