Welcome to our TV Fashion column, where TV Ate My Wardrobe‘s Emma Fraser discusses the trends in television apparel. This week: Get your Fall fashion from Summer’s big hit, BrainDead.

Bugs, exploding heads and an all too familiar political backdrop where nothing gets done doesn’t necessarily sound like the place for fall style inspiration, but BrainDead injects plenty of sartorial delights into this often absurd and fun drama.

This Washington D.C.-set series has become a summer highlight as some of the big hitters from last year are suffering second season slumps and BrainDead somehow doesn’t seem that crazy in our current climate. Okay so maybe the bugs and exploding heads take things into sci-fi territory, but everything else is pretty much real-world from the bickering between parties and the desire to power dress after watching something set in this kind of workplace.

Creators Robert and Michelle King have gone from one political and well dressed drama with The Good Wife to BrainDead, and also brought along some of the creative team including costume designer Daniel Lawson. Lawson is responsible for making me want to wear all the statement jewelry, expensive red power suits and a number of leather jacket/knee high boot combinations; none of these things are close to how I normally dress nor do they fit the carefully curated lounge pants/tank/sweater working at home freelance rotation I have perfected.

The final season of The Good Wife introduced Lucca Quinn (Cush Jumbo) who, standing out in colorful tailored attire amidst the usual zipped and buttoned Escada and Narciso Rodriguez jackets Alicia Florrick (Julianna Margulies) favored, now feels like a dry run for what we are seeing on BrainDead. Lucca went bold in Peter Pilotto and Alexander McQueen injecting a different kind of power dressing into proceedings. Lucca was relatively new to the kind of world we had been watching Alicia Florrick navigate for the previous six seasons and it also points to a generational shift with how women in a work environment such as this dress.

BrainDead‘s Laurel Healey (Mary Elizabeth Winstead) is an outsider to Washington D.C. and this is reflected in her work attire; Laurel might be from a political family, but she has been living in LA working as a documentary filmmaker. It would be easy to have Laurel dress in such a way that really sets her out from the crowd and gone for wardrobe picks that underscored this in a blatant fashion. Instead what Daniel Lawson has done is far more subtle because Laurel is still a professional and she is working for her brother (who is a senator) to get the money from her father to finish her passion project documentary and not to stir things up. Except because of brain eating bugs that have invaded she has done just that, but her wardrobe is still appropriate for the job she has undertaken.

Washington D.C. fashion has been on the radar in a big way for the last few years in both comedy and drama; Scandal delivers Prada bags, Burberry trenches and an endless supply of white attire and wine cardigans to avoid spilling that big glass of red down. On House of Cards, Claire Underwood (Robin Wright) wears the ideal power wardrobe for someone who is meticulous and maybe a little on the cold and calculating side, whereas on the comedy side of things Selina Meyer (Julia Louis-Dreyfus) skews somewhere between Alicia Florrick and Mellie Grant (Bellamy Young) with a lot of strong reds and blues. On a slightly different track going from small government to big at the start of season 5 Parks and Recreation spent a little time in the capital city and April Ludgate’s (forever TV style icon for this writer) wardrobe is a lot more Laurel than Olivia Pope (Kerry Washington).

Like Lucca Quinn, Laurel also wears labels such as Alexander McQueen and her work outfits double up for post-office drinks and dancing in loud bars. These funkier ensembles look smart enough for an office without appearing too stuffy and have an edgy quality that show Laurel is still in control of her faculties – the bug people go a little Stepford after half their brain has gone – and that she is an outsider in this environment.

While we’re on the subject of dancing Laurel’s wardrobe also has the required DC party attire that also reads as a little cooler. Everyone needs the perfect dress and at Tax Prom, Laurel in a plunging frock unleashes both her dance moves and the all the flames chemistry with Gareth (Aaron Tveit).

Part of BrainDead’s charm comes from every interaction between Mary Elizabeth Winstead and recent Observer profile subject Aaron Tveit, which positively crackles at every turn. Despite being from opposite sides of the aisle they share a common interest; firstly in each other and secondly for the drink that has gone from representing boozing in the daytime in 1960s America (oh hey Don Draper!) to being the flirty cool drink of choice that is now shorthand for “I like you and I also like to impress with a solid classic alcoholic beverage.” See also New Girl’s Nick Miller (Jake Johnson) for more evidence of this.

Just watch this week’s episode for a perfect mix of the ridiculous combined with smoking hot tension and this also happens to be BrainDead’s best episode to date. I’m not even going to gripe about who wears a bra to bed (or during sex – this is CBS after all and so did Carrie Bradshaw and she was on HBO) as Laurel’s underwear was so perfectly mismatched under her long sleep Henley (another item I am adding to my wish list). Laurel also ticks the excellent patterned bathrobe box that would have earned her a mention in this robe obsessed post from a few months ago.

Back to Laurel’s daywear and she has more pussy bow blouses than an episode of Masters of Sex (the current TV champion of pussy bow blouses), a coat collection to rival Olivia Pope in quantity – her caped trench is pink not white – and enough blazers to pitch her documentary to distributors (when it is finished of course). Finally someone has filled the Liz Lemon ‘Best Blazers on TV’ hole in my heart and Laurel is a summer TV character offering up plenty of fall style inspiration. 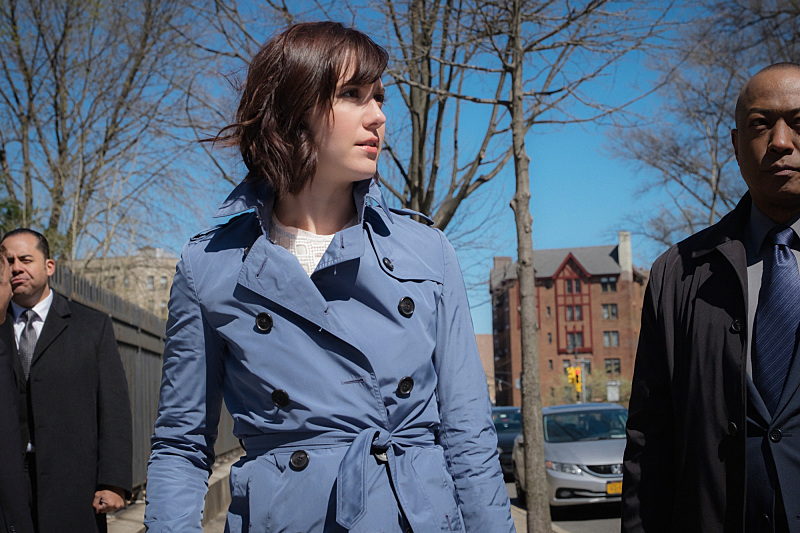