Following the fatal shooting death of an aide to Gov. Andrew Cuomo at last year’s J’Ouvert festival in Brooklyn, the mayor and the police commissioner said this year’s event will be the safest in the celebration’s history.

J’Ouvert garnered new attention last year after Carey Gabay, the first deputy general counsel at the Empire State Development Corporation and a former assistant counsel to the governor, was caught in early-morning crossfire while on his way home from celebrating J’Ouvert last year. The festival, whose name means day break, is held at night ahead of the more formally organized West Indian Day Parade.

Today, Mayor Bill de Blasio and Police Commissioner Bill Bratton said they have teamed up with the organizers, elected officials and community leaders to come up with a set of measures to improve safety at the event. That process kicked off a day after Labor Day last year.

This year marks the first time the night-time festival and march is permitted by the NYPD and has an approved route. Working in conjunction with J’Ouvert City International, the NYPD will install more than 200 light towers along J’Ouvert’s route and deploy both uniform and non-uniform officers to keep the event safe. (The parade itself has long been a permitted and heavily policed event that draws many elected officials marching in it.)

“A few bad apples over the years have caused trouble,” de Blasio said at a press conference announcing the security measures at Prospect Park. “We are not going to let a few bad apples destroy something that’s so important to hundreds of thousands of good New Yorkers. We’re going to make sure that J’Ouvert and the parade are safer than ever.”

The mayor also praised Gabay and his family, who he said “turned that pain into action” by playing a key role in bringing about the new security measures. He gave a special shoutout to Gabay’s wife, Trenelle, for her participation in meetings. (Trenelle, Gabay’s mother, Audrey McNaughton, and his brother, Aaron McNaughton, were all in attendance.)

“Carey, we’ve all come to know, and it’s such a sad way to come know such a good person but we’ve come to know his goodness, his lifelong commitment to public service and his love of his heritage,” de Blasio continued. “His deep love of J’Ouvert and the parade and everything it meant to him and his family and we miss him. And his family misses him so deeply.”

The march, which will have an official start time of about 4 a.m. on Sept. 5, starts at Grand Army Plaza, goes south on Flatbush Avenue, east on Empire Boulevard, south on Nostrand Avenue and ending at Midwood Street.

The announcement comes as a show of unity after initial confusion over who should take ownership of the festival following Gabay’s death, with Bratton saying nobody wanted to claim responsibility for the event while elected officials who represent central Brooklyn disputing that assertion. And just as J’Ouvert is a separate event from the West Indian Day Parade, there are also many other events to celebrate J’Ouvert that remain separate from it—including parties in bars, clubs and even junkyards.

Bratton said parades are a rich tradition in the city and that the city was able to successfully address similar safety issues at other parades, including the St. Patrick’s Day Parade and the Puerto Rican Day Parade.

He said the Police Department also worked hard on the West Indian Day Parade on Labor Day to improve the safety of the trailers that move many of the participants.

“Similarly, dual events, the J’ouvert and the Caribbean Day Festival Parade following, the events of this year we believe will be the safest in the history of both events,” Bratton said.

“It is very important that we do this so we can pass on our culture to our children,” Rennie said. “There is a next generation of children who must understand that J’Ouvert doesn’t have violence. That our culture have no part for violence.”

Gabay’s younger brother, Aaron McNaughton, told reporters following the press conference that coming was a matter of expressing solidarity, noting that his brother loved J’Ouvert and that he misses him “dearly.”

“It was important for me to be here,” McNaughton said. 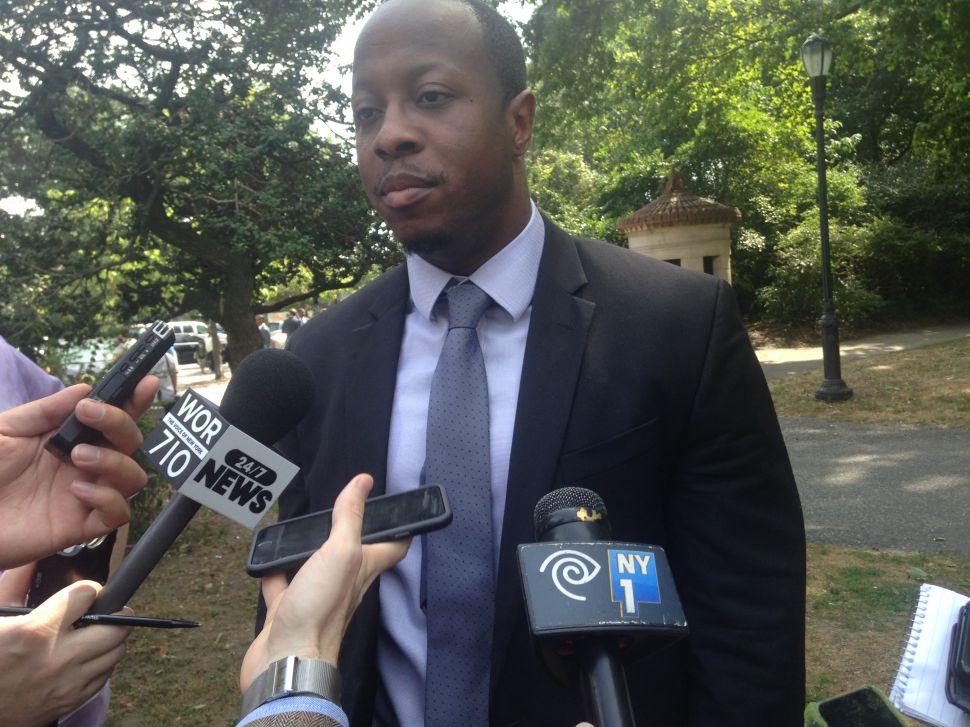