Police Commissioner Bill Bratton says the press has got him all wrong when it comes to the NYPD’s announcement it will seal officer disciplinary records—it’s the media that prompted the department to look into the matter in the first place.

Last week, the Daily News reported that the NYPD is longer going to publicly disclose a police officer’s disciplinary record, with the department saying Section 50-A of the 1976 state Civil Rights law actually precludes them from releasing the information. The move prompted open government groups to blast the department for becoming less transparent—the department has disclosed officer discipline for decades—but both the outgoing commissioner and Mayor Bill de Blasio have maintained that it is only a matter of complying with state law.

Bratton said the NYPD realized it was not following the law after a journalist filed a FOIL request caused the agency to look at it. He did not name the journalist or media outlet.

“One of your FOIL requests caused us to take a look at it based on an inquiry,” Bratton said. “So if you have somebody you wanna blame, blame whoever filed that FOIL request, because they have now denied you access to information that we were giving you inadvertently for 60 years.”

He said that “what was lost in the reporting” of his comments yesterday was that it is an “issue of law” that all police agencies in the state follow. He stressed that the NYPD does not “have the independent ability to correct the law.”

“So you can ask away from out of doomsday, the resolution of this issue is in Albany,” he continued. “It is a state issue that they will have to address.”

He would not weigh in on pending disciplinary charges against Officer Daniel Pantaleo in connection with the death of Staten Island man Eric Garner after a police chokehold, but he did acknowledge the irony inherent in the fact that the information would actually get out anyway.

“Would it eventually get out? Probably. But we would not be issuing a press statement to that effect. So that is the limitation,” Bratton continued. “The irony that we would have an open trial in many instances in a disciplinary matter, that the results of the decision of the judge would not be publicly available.”

Bratton insisted he is in favor of publishing disciplinary actions taken by the NYPD against members of the department who have violated either the protocols, procedures or the law—a position he says he’s had “in my now almost 40 years of policing.”

“If this goes into a legislative initiative up in Albany, my successor, Chief O’Neill, and the mayor will have to basically take a position on it,” he added. “Myself, personally, I would be supportive of opening up the process more than we are now legally allowed to do.”

Bratton was prompted to discuss the matter again when Politico’s Azi Paybarah asked the mayor whether the police working closely with the community to ensure safety at the upcoming J’Ouvert festival in Brooklyn runs counter to police not disclosing officer discipline matters.

De Blasio insisted that the two matters were unrelated, noting that the process involved working with the clergy, elected officials and community leaders as part of a “neighborhood policing philosophy.”

“No. Again, that’s a matter of state law,” he said. “This is about a deep and consistent planning process with the community.” 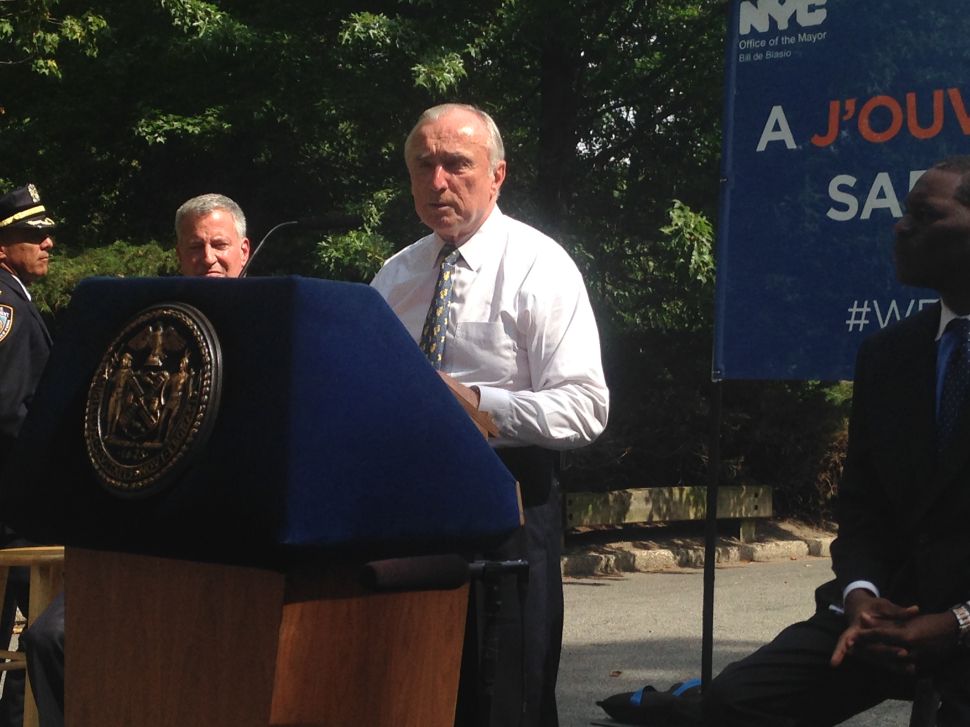