What was life like before this summer of Pokemon GO? It’s hard to remember; but I’m pretty sure it involved being shit-terrified over the state of both the world and pop culture simultaneously, like a Mr. Robot episode that you try to turn off, only to realize that Fsociety has taken over your dystopian SmartHome and your remote controls are remote meaningless. Pokemon, before this summer, was something I thought of–if at all– as something for nerds much younger than myself. Though I might have been young enough to fit into the Game Boy demo when Nintendo released its first iteration of the adorable monster franchise in 1996, I remember thinking that the trading cards were for the dorks who played Magic: The Gathering during recess (a full social caste lower than me!) and cartoons were for babies.

Then Pokemon GO happened, and it was unlike any other zeitgeist convergence I’d ever seen. Overnight, seemingly, roving gangs of fixed-gear bikers were congregating outside the CVS across the street from my apartment and openly talking smack to 12-year-olds who were dominating the gym that Ingress players had crowd-sourced back whenever Ingress was a thing. There were trend articles instantly: people using Pokemon Go as a dating app! People using Pokemon Go to lure you into a dark alley and steal all your possessions and/or murder you! People using Pokemon Go to…well…actually, those seemed to be the two options.

Now I’m not really the kind of person who hops onto every trend the moment it appears as a Twitter hashtag. I don’t even remember what inspired me to download the app and test it out in the first place; only that I had some vague notion it would make me more popular to the summer interns who worked here (a full social caste higher than me!). But immediately, I was hooked. My social media pages have been dominated this summer with pictures of the Pokemons I’ve caught (and I’ve literally almost caught them all…at least the ones you are able to catch in the continental U.S.) and my level score. And I’ve noticed something strange: despite originally joining Pokemon GO as a way to connect with people, it’s actually made me feel more apart from them…especially other players. That’s when I knew I needed to stop and take stock of my hashtag #PokePrivilege. (Feel free to trend that, you guys.) Here’s what I’ve discovered.

I’m very lucky to live in one of the biggest Poke-epicenters in the world. I don’t think I even realized this until I drove to Maryland in late July and found nothing on the entirety of I-95 except a few Pidgeys. Ironically, the only Pokestop I found in the whole state was located at my grandmother’s assisted living facility, and all I managed to catch there was a Rattata and a guilt trip. Now I truly appreciate it when my friends tell me that Pokemon Go offers them no endorphin release of joy, seeing as anywhere except New York (and maybe some parts of Los Angeles) are barren Mad Max-ian wastelands populated a few measly Spearows. Or so I imagine. Though the images I’ve seen on Reddit are pretty bleak. On any given block in New York, you can find at least two different Pokemons. There are Pokestops all over the damn place. We have Central Park, which is, as far as I know (and care to!), the best place to play Pokemon in the whole world.

For New Yorker residents, to play Pokemon Go is to know how truly #GPSBlessed you are. (Feel free to trend that, you guys.) For some people, a wild Dodio sighting would be considered a great thing, instead of the giant pain in the ass I consider them to be. There might be kids starving in China, but knowing there are places in Northern Michigan where only the occasional Venomat resides? Now that’s truly bracing.

OH COME THE FUCK ON! pic.twitter.com/PJpVKXoBkv

Don't it always seem to go you don't know what you've got till it's Dewdong? #pokemongo

According to an informal survey of everyone I’ve checked in with this summer, I’m the only person who has spent money on Pokemon GO. Living off your once-a-day gym defender bonus of 10 coins is no way to play this game. I want that endorphin rush of being able to put out an incense any time I want. And you better believe I’m on that evolve-and-dump trip for my lesser Pokemonsters, which means getting that sweet Lucky Egg double points. Do you know how hard it would be to level up without spending a ton of money on this game? No, I’m really asking: I’m already halfway through Level 29, and I just reached that this weekend.

Many people have already noted the game’s notably sparse instructions and have gone online for help figuring out the gyms, Pokestops and still-infuriating “Nearby” functions. And while I’ve definitely spent money and downloaded all those Pokemon apps that help me cheat by seeing where the next Machomp is going to pop up, I still have no idea what a Machamp is. I don’t care about the origins of Pokemon. I don’t care about the TV show, or the card game, or any other iteration of Pokemon, because unless it’s a clue about how to hack an Eevee evolution, it’s non-essential to my gaming process. (By the way, I have two of every Eevee evolution. Come at me, bro.) Sometimes, finding out what a Pokemon evolves into is the most WTF part of the whole process. And honestly? I don’t want to know. Some of these evolutions seem borderline racist, but in a way that’s pretty hard to describe what, exactly, is so offensive about a fox holding a spoon. (Seriously, Kadabra?)

Haha what the FUCK. #pokemongo

And don’t get me started on Jynx. The first time I hatched one, I was like “Thank god this thing is purple, or we’d really have a problem!” Only to discover:

Yeah, the only way to make that image worse is to literally Photoshop Robert Durst’s head onto that genie. So…here you go!

Deep Down, We’re All the Same Color

Subtext: I chose Team Mystic. So what? Right now, all I need is an Alakazam, a Charizard, a Hypno, Machamp and a Muk and then I’ve WON. Do you hear me? I will have beaten the game and proven that my life has not been a worthless series of money-sucking trivialities. I have earned my Pokemon Privilege fair and square. You all have fun with your Poliwhirls and Bellsprouts. I’ll be hanging out in the winner’s circle. Just me and Ash, the head Pokemon*. 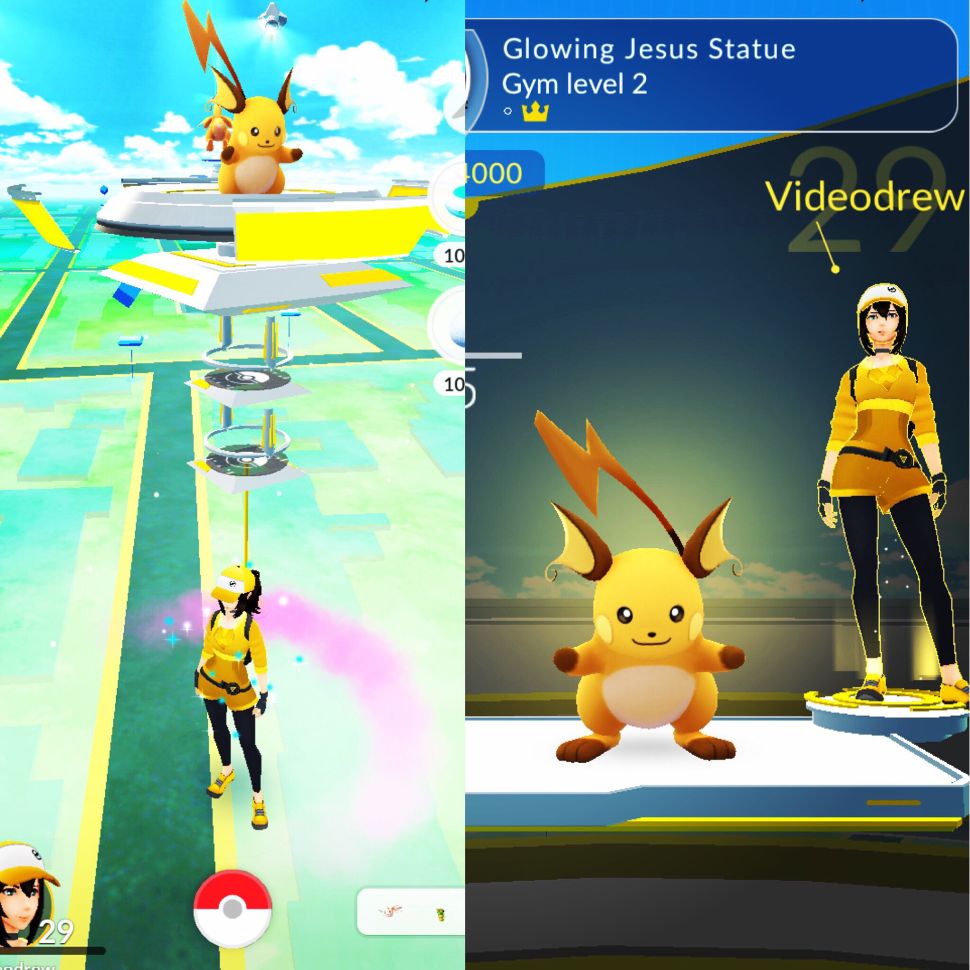