Hillary Clinton, the Democratic party’s nominee for president, launched a podcast this afternoon, called With Her. Its first episode is only a little over 16 minutes long. In it, the show’s new host, Max Linsky, interviews Hillary Clinton about what her typical day is like, now that she’s the Democrats’ official choice. He starts with her getting up in the morning. He ends with her going to bed. Along the way, he gives her a chance to draw a line between some of the big issues her campaign addresses to the people she meets every day.

It’s a big moment for podcasting. A major party’s candidate for president has decided to use the medium to connect to people in a new way, and, to this reporter, it feels different. I’ve been known to throw a little shade on the notion of how “intimate” podcasts are said to be, but Clinton comes across in a fresh way on this new show. Every news consumer has been listening to her speaking from podiums at large events for the last two years. She sounds completely different sitting in a quiet room, talking into a good microphone, in conversation with someone she likes.

The show has clearly been designed to make listeners more invested in Clinton.

“I’m not a journalist, and I’m not impartial. I’m a small business owner and a huge supporter of Hillary Clinton’s,” Linsky says in the first few minutes.

A podcast is an unlikely means to persuading undecided voters, but at this stage in the game, that doesn’t really matter. The Clinton campaign’s chief concern at this point is most likely just to keep their relationship with existing supporters strong. It’s a safe bet that she has lots of NPR loving podcast fans in her base who will check out the show. This first episode is a nice listen. It has good moments. It’s humanizing. It makes her feel close. If others feel the same, they will recommend it to their friends.

Linsky has opened this series very gently. This first episode is entitled “Hi, Hillary,” and he set it up just to give listeners a sense of her life, these days. There’s a moment where you feel Linsky connect with his subject when they have the following exchange:

Linsky: We have 20 minutes. Busy person. … These are like the biggest 20 minutes of my week for sure. This is like a highlight of my week. You, probably not the case. … You seem like you’re all here right now to me. How do you do that? …
Clinton: … Here’s the simple version: I do a bunch of events every day. I don’t ever want the people that I’m talking to or with to feel like I’m just going through the motions … for the people I meet, whether or I’m talking to you or going to some other event, that will be the one time that they will interact with me, and I want do the best I can to be engaged, to be present, to give the best ideas or comments or whatever it is I’m doing.

The campaign picked Linsky, the co-founder of Longform, to host the show. Linsky has proven to be something of Carson Daly of podcasting. He’s the guy legacy operations (like the Cleveland Browns) call when they want a voice on a show that signals it takes podcasting seriously. A little while back, the Observer introduced Linsky and Jenna Weiss-Berman, as the co-founders of a new podcasting studio called Pineapple Street Media. That company is running the Clinton campaign’s new show.

Linsky argued when we met that Weiss-Berman is the new company’s secret sauce. He may bring its comforting voice, but she brings the editing expertise that keeps shows winnowed down to the best bits. Clinton probably also met Weiss-Berman when the candidate appeared on a show on Buzzfeed when the Pineapple Street co-founder ran its podcasting operation.

Further reading into the podcasting tea leaves, the show is being hosted on Megaphone, the platform from Panoply (a network of shows owned by Slate—we interviewed one of its popular hosts, who runs a show about happiness). When people talk about Megaphone, they usually talk about dynamic ad insertion. Odds are, this is not why Clinton has used the service (if anyone here’s a Stamps.com ad on one of her episodes, please let us know, but we are going to guess that it won’t run ads).

Our guess: the team used Megaphone to make it easy and also to have scaleable servers in case of the very real possibility that demand for an episode blows up.

Whether or not this show has a return-on-investment for the campaign, it will boost the medium. Podcasting has been presidential for a while. The White House posts a variety of recorded material as podcasts, but the real shift came when the President appeared on WTF With Marc Maron, an historic moment for on-demand audio. Now, With Her has made podcasting a feature on the road to the White House.

The Clinton campaign has not yet announced how frequently new shows will come out, but Linsky says in the episode that we should look forward to hearing more from other members of the campaign, as well as the candidate herself. 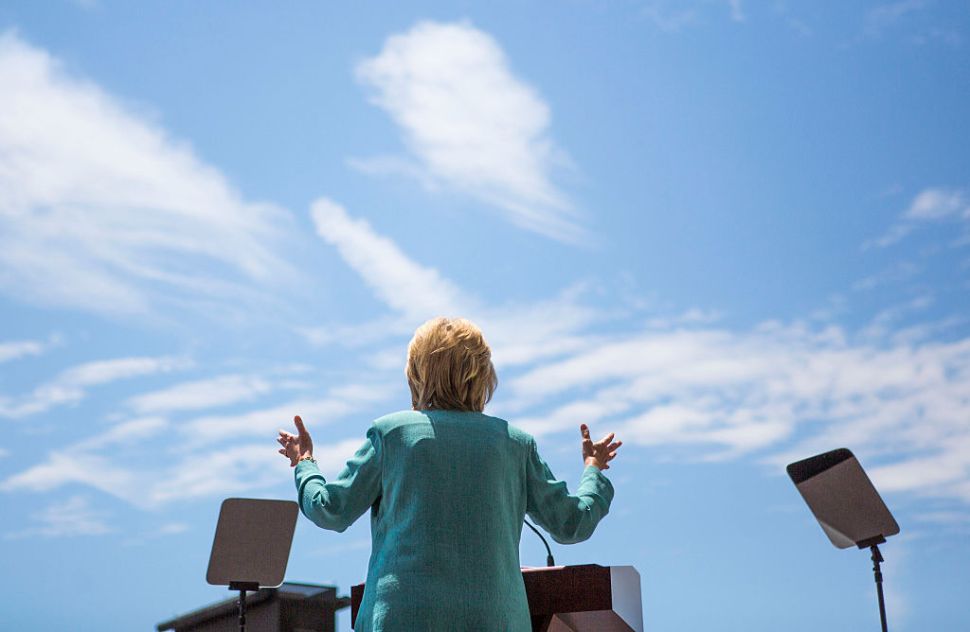