Hillary Clinton’s speech last week about the alt right was the latest attempt by her campaign to win the right-wing establishment over—and away from her competitor Donald Trump. By distancing Trump from the Republican leadership, she can preserve the GOP majority in Congress and use them during her presidency to pass neo-liberal legislation. Having already solidified support from the Democratic Establishment, Clinton is using that “D” next to her name as a Trojan horse to push forth the elitist and corporate interests held by her vast network of wealthy donors from both parties.

In her speech, Clinton referred to former Sen. Bob Dole, former president George W. Bush and Sen. John McCain, noting, “We need that kind of leadership again.” She added that she was honored to receive support from Republicans. While Clinton is aligning herself with the right, Clinton supporters in the media are also highlighting these ties in their defenses of her.

“Most Americans not named Bush or Clinton don’t spend much time thinking about the plight of impoverished people with AIDS in developing countries whose lives depend on access to wildly expensive drugs,” wrote Mark Joseph Stern in Slate. The piece was a lousy attempt to ignore the profound ethics violations and corruption allegations over how the Clinton Foundation raises money.

On August 24, Politico published an article claiming Clinton is teaming up with Speaker of the House Paul Ryan to combat poverty. This is an attempt to suggest Ryan prefers Clinton over Trump, reflecting a campaign strategy even corrupt Democratic National Committee (DNC) staff warned Clinton against in an email released by WikiLeaks. The email reveals that the Clinton campaign intended to portray Ryan as at odds with Trump in May, but DNC staff resisted, believing it would hurt the Democratic Party’s other candidates running for Congress around the country.

“Asking state Parties to praise House Republicans like Ryan would be damaging for the Party down ballot,” former DNC communications director Luis Miranda wrote to former DNC CEO Amy Dacey on May  16, at which point Ryan had yet to endorse Trump. “We would basically have to throw out our entire frame that the GOP made Trump through years of divisive and ugly politics. We would have to say that Republicans are reasonable and that the good ones will shun Trump. It just doesn’t work from the Party side.”

Now with a comfortable lead over Trump, Clinton’s campaign is employing this tactic to welcome defectors from the Republican Party, despite the repercussions it could have for the rest of the Democrats. The DNC’s recent fundraising efforts attest to this shift to focus the resources of the Democratic Party entirely on Clinton.

Thanks to a campaign finance loophole, wealthy donors who maxed out their contributions to the Clinton campaign and DNC directly are funneling money to the DNC and Clinton campaign through state parties. A recent Bloomberg article noted, “on average, 83 percent of the money that was sent from the state committees to the DNC in July originated with a donor who had already given the maximum $33,400 to the national party.”

Under the pretenses of courting Republicans for the sole purpose of soliciting their wealthy donors to stop Trump, Clinton’s campaign has pushed for money from former Bush and Romney donors, despite the clash between these donors, their interests, and the platform of the Democratic Party.

In early August, the Clinton campaign even launched the Republicans for Hillary effort. Instead of using Trump’s unfavorable ratings against the Republican Party, Clinton is embracing its establishment who don’t like their party’s candidate. This shift should be concerning to Democrats, as it is indicative of the fact that Clinton plans to relive the neo-liberal disasters of the first Clinton Administration.

Bill Clinton pushed through destructive welfare reform, catalyzed mass incarceration, deregulated the financial industry, and passed NAFTA under the banner of the Democratic Party. A Republican majority in Congress not only will provide President Hillary Clinton with a scapegoat for any flip-flopping or broken campaign promises in office, but will provide her with the support of the establishment in both parties to continue promoting the interests of corporate giants over the public interest—just as she did at the State Department. 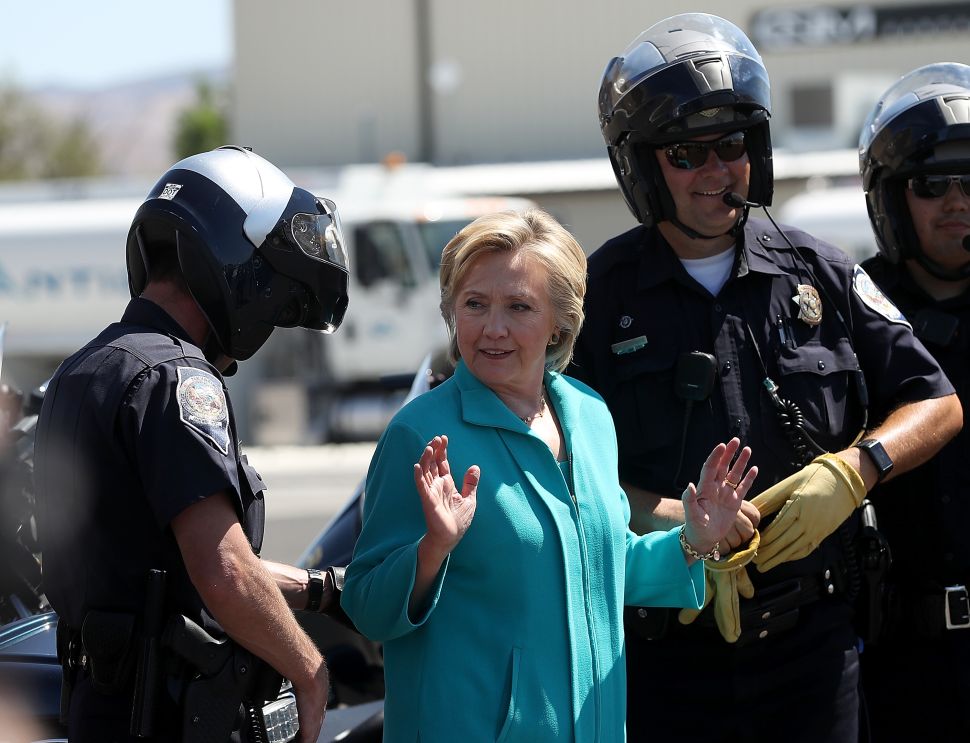