Whether dancing or designing, Coil + Drift founder John Sorensen-Jolink is concerned most fundamentally with objects in space and how they relate to one another. Though, at face value this approach may seem like an oversimplification, looking at his new ICFF Award winning collection (Best New Designer) it is all too obvious that he knows exactly what he’s doing.

Shortly after winning this prestigious award, Sorensen-Jolink talked about his path to this moment and how he plans to continue dancing to the beat of his own drum.

When did you start Coil + Drift? The most recent collection is the second of Coil + Drift’s that I’ve presented and the company itself is three years old.

But before that, you were walking ICFF (International Contemporary Furniture Fair). Yeah, I was making furniture, mostly custom pieces. Then, at a certain point when I had the products and the name of company figured out, it was time to do some serious investigating—before I launched the first collection at Brooklyn Designs.

Yeah and it was awesome. You were super inquisitive and asking all of the questions about really mundane stuff that’s actually really important! I think what’s been interesting about the journey that I’ve had in furniture, is that it’s been a really fast transition into a new world in a couple of senses. The more obvious is that I’ve been making furniture instead of dancing, but I think the bigger change is running a business. I was just getting into learning how to manage production and the ins and outs of marketing, and when I discovered trade shows it was such a revelation. The fact that that there was this whole community of designers in New York, all in one place and so open to dialogue and sharing only reinforced the idea that being a designer could actually be the most exciting part, for me, of living in the city.

Do you still dance? When I get opportunities that I think are interesting, which seems to happen around every three months. The benefit of my life with Coil + Drift is that I no longer have to base my dance decisions on how much I’m being paid… but I still don’t work for free!

When people ask me why a dancer or choreographer would have any interest in designing furniture, the first thing that I say is that it’s objects in space.

When you started C+D did you aspire to win the Best New Designer Award? I think there was an initial honeymoon period where I was in line with a lot of people’s fantasy that you could sit around and carve spoons and live a really peaceful existence and survive. The central difference for me was that this lasted about a month. I quickly realized that this wasn’t going to work at all and what I really enjoyed doing was designing, and the feeling that I could bring a really unique perspective through my work. So yeah, I do think the decision to be a designer was made pretty early on.

What’s funny is that to this day I still, fairly often, have to clarify to people that my goal is not make things indefinitely for the rest of my life.  I think a lot of people assume, especially in Brooklyn, that it’s the end goal and I look forward to the quiet moments when I can sand a piece of wood. In fact it’s usually the opposite where I’m looking for a quiet moment when I can work on spending time designing something new.

You really nailed it with this most recent collection—it makes perfect sense both as a whole and in terms of how each of the pieces relate to one another. Thanks. I definitely feel like my voice is getting clearer and my editing is getting more succinct so I’m glad that’s coming through.

And, in terms of designing a collection with this sort of impact, are there any parameters that you set for yourself to help guide the process? I think that giving yourself boundaries to operate within is a really nice exercise to do while you’re creating.

What I did for this collection, which I thought was really useful, was to start working on a something new and then with each piece, whether it took a week or a couple of months, eventually a character would start to appear, and I would finish designing each piece with this character is mind, for them.

As a dancer to operate based on the idea of a character, someone’s body, how they move and dress and behave makes all the sense in the world.

It sounds like what you’re talking about is choreography. Totally. When people ask me why a dancer or choreographer would have any interest in designing furniture, the first thing that I say is that it’s objects in space. It’s all the same.

This is a super literal place to go in terms of a last question, but have you ever considered choreographing dance around your work? Actually, I have. Stay tuned, because there is definitely something in the works for 2017. Because ultimately it just has to be that way.

Trained as an Industrial Designer, Isaac Friedman-Heiman is currently a Partner and the Creative Director at the online design startup WorkOf. Prior to his current role Isaac was a founding member of the acclaimed Brooklyn design studio, Souda, winner of the ICFF Editors Award for Best New Design Studio in 2014. He currently lives with his partner, photographer Madeleine Cooke, in Fort Greene. 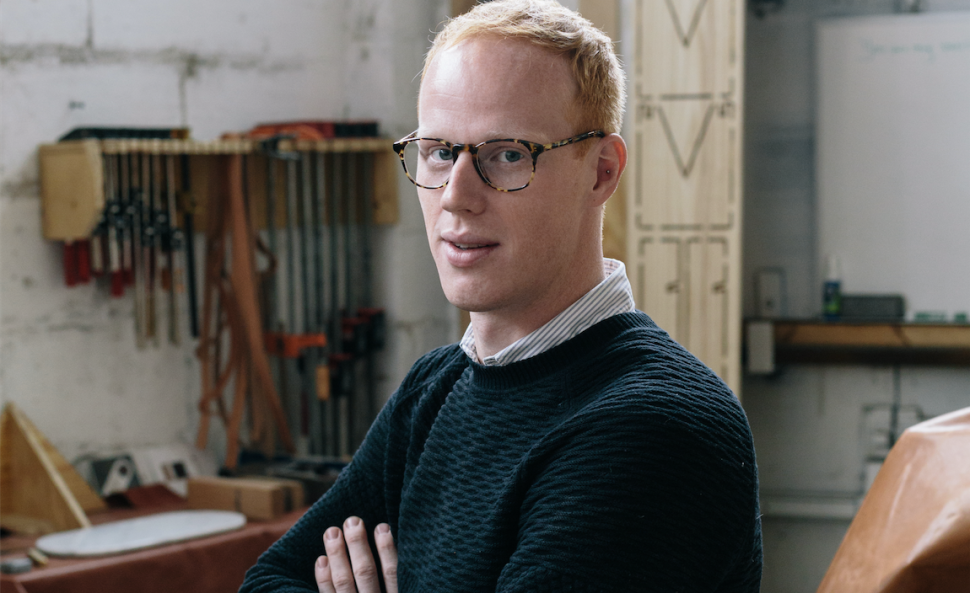