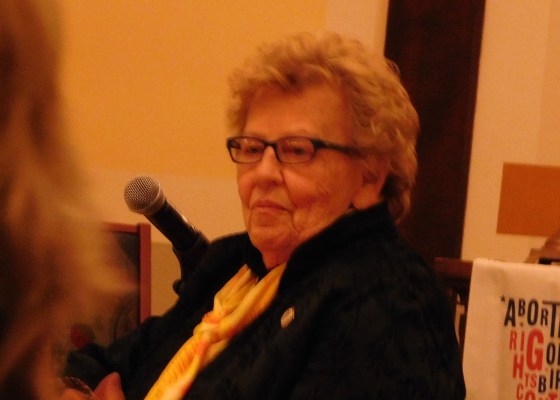 TRENTON — The debate over whether New Jersey should broaden its concealed carry permit application continues. Lawmakers heard public testimony Monday on a bill from Senator Loretta Weinberg (D-37) that would roll back changes to the state’s “justifiable need” statute. Governor Chris Christie’s administration changed the language in the statute to include “serious threats” to a person’s life in April.

Detractors and supporters of Weinberg’s resolution spoke during a public hearing at the State House. Whereas private citizens previously had to present evidence of specific, credible threats to their lives to receive a permit, the new language includes threats “not directed specifically at an individual but which establish more than mere generalized fears or concerns.”

Few New Jersey residents apart from current and retired police and security guards end up qualifying for a permit to carry now, but critics like Weinberg have argued that the new standard will lead to a dangerous rise in handguns on the street.

Weinberg’s bill would brand the change as counter to legislative intent. She told New Jersey Advance Media that she fears the new standard would allow “every cab driver, pizza delivery driver, Uber driver and anyone else living or working in a high-crime neighborhood to qualify for a firearm permit.”

Mark Cheeseman of the New Jersey Second Amendment rights group Party of Six, who was himself denied a permit to carry, argued that the state’s existing screening processes will do enough to prevent that scenario if the change to the “justifiable need” criteria stays on the books.

Cheeseman said he first had to apply for an ID card, a permit to purchase a pistol, a carry permit. Those applications involved numerous criminal and psychiatric background checks before the state would consider his letter making his case to carry.

“There are a lot of safeguards still in place even if these two words, ‘serious threats,’ aren’t added into the statute,” Cheeseman said in response to Weinberg’s argument. “They may not pass all of those safeguards that I just spoke about.”

Kip Cherry of the Coalition for Peace Action argued that the changes will make domestic violence cases more dangerous if women are able to bring a gun into their home for their own self-defense. That scenario and the case of a Berlin Township woman murdered by her abuser have been lynchpins of Christie’s support for the change.

An abused partner’s purchase of a firearm “often angers the perpetrator of that violence,” she said. “Rather than helping the victim, in my opinion such a change in the law would actually make situations of domestic violence more dangerous to the woman, and to others. We should do everything we can to deescalate gun violence.”

Darin Goenz of the National Rifle Association made the case that lawmakers should compare rates of improper or deadly use of firearms among permit holders and police departments nationwide. Those with concealed carry permits, he argued, often have a comparable or better record in states without New Jersey’s stricter gun regulations.

“What you really need to look at is police,” he said. “We entrust police to carry firearms every day. No one thinks twice about it. But at the same time, cops will occasionally misuse a firearm or have a dereliction of duty. So how do the police stack up against the citizens who carry?”