When it comes to Alok Vaid-Menon, performance is not reserved for the stage. “Performance is everything all the time,” the 25-year-old recently told the Observer, while lounging on a mod red chair at the Public Theater on Lafayette Street.

Vaid-Menon—towering what feels like a foot above me—appears colossal but also flustered.

“I underestimated how hot it was and how much time it would take to get here in heels,” they—Vaid-Menon uses the pronoun “they” in defiance of the gender binary—tell me with a hesitant laugh after we’ve settled in a few minutes later, and the sweat has dried from their forehead. I glance down to spot a pair of chunky, raspberry-colored, leather, lace-up platform boots peeking out from beneath the table. Their outfit is electric—pastel-striped shorts, opaque pink lipstick and a perhaps ironic “I hate fashion” tote.

Vaid-Menon is best known as a constituent of the trans, South Asian spoken word and performance art duo DarkMatter, a collaboration with Stanford University classmate Janani Balasubramanian. Together, the two have performed their poems at places like La MaMa Experimental Theater, the Brooklyn Museum, Nuyorican Poets Café and the Asian American Writer’s Workshop. They also recently appeared at Lincoln Center’s La Casita festival, the Queer International Arts Festival and Public Theater’s Under the Radar festival, with spoken word poetry sets that are equal parts politics and comedy but are emotional enough to bring you to tears. Instead of a set repertoire, the duo presents new poems each time. Gender and race are often at the forefront; for instance, in one poem called “White Fetish,” DarkMatter mocks the way people of color are often fetishized or exoticized (“I want to wake up next to the smell…of NPR membership”). In another, called “Trans/Generation,” Vaid-Menon talks about what it was like to come out to their family. “In my family, coming out is a smile smudged on a family photograph,” Vaid-Menon said.

DarkMatter also gets into the nitty-gritty of lighter topics, like online dating, in their performances. When the duo’s onstage, it often feels as though they’re talking directly to their audience rather than at them.

Until now, impassioned recitals of social justice-minded poems have grounded DarkMatter’s usual routine, if it could even be called that. Their spoken word poems are not traditional slam poetry, instead adopting aspects of performance art without being straight up conceptual. The duo rejects the “rules” of slam and instead has created their own form, which often includes singing, chanting, dance and acting.

Now, Vaid-Menon is pushing past the work that’s already put them on the map. To do so, they’re hoping to play even more with the element of sound—particularly through voice—and to adopt aspects of burlesque and drag in an attempt to be able to reach their full potential as performance artists.

DarkMatter has amassed an impressive following, especially among college students, a demographic that is particularly attuned to the identity issues their work centers on. Vaid-Menon attributes some visibility to social media: DarkMatter boasts upwards of 36,000 followers on Instagram and nearly 18,000 on Twitter. They have fans from every walk of life.

“My mom’s friend in Texas left me a message like two years ago where she [told me], ‘Your poetry was the first time in my life I could articulate what happened in my life as an immigrant,’ ” Vaid-Menon told me, noting that it came as a surprise that this friend happened to be a straight older woman. “What it got me thinking is the power of art is that it can actually take two people who have never met any time anywhere in the world and give them a really fundamentally profound connection with one another.”

You’re in a collaboration with your bacteria, with your mom, with the environment, with your clothing.

Before attending Stanford, Vaid-Menon, the child of Indian-American parents, grew up in College Station, Texas—a place they retroactively appreciate. “What growing up in Texas allowed me to do was be friends with people who were fundamentally different than I was,” Vaid-Menon explained. “The place forced [me] to recognize the urgency of the moment.” They noted their city-born friends from places like L.A. or New York—the latter is now Vaid-Menon’s place of residence—often hadn’t come to understand the need for social activism in the same way.

Vaid-Menon moved to New York after college to pursue a fellowship at the Audre Lorde Project—a center for “lesbian, gay, bisexual, trans, two spirit, and gender non conforming” people of color—where they continue to work today as a grassroots fundraising and communications coordinator.

In a 2013 TEDx talk where Vaid-Menon addressed Middlebury College students, they explained that their work behind the scenes is not glamorous. “My goal is to make sure that we have money, which is so not fun but so necessary,” they emphasized. “I started to realize—holy shit!—[There’s so much work behind]…public activism.” While Vaid-Menon noticed many people were interested in signing up for public demonstrations, few were interested in the nitty-gritty behind the scenes, like designing and printing flyers. “It’s a thankless job, but it’s just as important.”

Landing in such a diverse city as New York was difficult for a person who was already trying to figure out how all their different cultural identities could be synthesized. After all, Vaid-Menon grew up in a small town in Texas, attended a university in California and is the child of South Asian parents who met in Canada. Realizing this stressful endeavor was futile, Vaid-Menon gave up soul searching and instead decided that it’s ultimately impossible to adhere to a singular sense of self.

And Vaid-Menon braves the unknown in many aspects of their life, even with regard to their art. “In a lot of my creative work, I don’t know what’s going on,” they said. “And that’s my answer. I don’t know…you don’t actually have to always know who you are, what you’re doing—that you’re in a constant struggle for negotiation of who you are.”

Beside one photo in which they are wearing a long skirt with a gold trim on the bottom and bubblegum-blue lipstick, they wrote, “To the four trans women who pointed and laughed at me on W19th street saying ‘what the fuck do you think you are doing?’ i wonder: how does it feel like to be on the other side of the joke for once? is that what we are fighting for, to be on the other side of the joke? would you believe me if i told you that this morning i looked at the mirror and asked myself the same question: ‘what are you doing?’ ”

A few days after we spoke at the Public Theater, a more hopeful message appeared when Vaid-Menon posted to Instagram a photo I was asked to take outside the theater. While most Instagrammers might be expected to include few innocent hashtags or maybe an emoji, Vaid-Menon drafted a long caption, titled “GENDER EUPHORIA.” At the end of the caption are the words, “I want so badly for people to give themselves permission to try, transgress, transcend. I want so badly to be able to walk down the street without having the joy punished out of me. I want so badly to share this with you. This (un)becoming.”

This unbecoming is an ideology that seems to appear in many facets of Vaid-Menon’s life. For instance, they believe adulthood is a sham. Just like when they were 13 years old, they continued to write in the dark and listen to angsty songs by Conor Oberst.

The same logic applies the binary between work and play. “The separation between your ‘professional life’ and your ‘personal’ life doesn’t exist,” Vaid-Menon explains, adding that their collaboration with Balasubramanian was no more a collaboration than our conversation.

Rather than inventing individual pieces dictated by time and place, performance has become more like a lifestyle for Vaid-Menon, who strives to live as an artist all the time. “It’s not like you’re an artist only when you’re writing a poem or…when you’re on the stage.”

According to the poet, transfeminine people are often expected to distance themselves from drag, but Vaid-Menon is diving right into aspects of burlesque and drag in their work. One time even interjecting midspeech, “Oh my god—it’s so fun!”

They’re also playing with elements of voice, incorporating the loop pedal as a sound effect. “That’s been really a delight,” Vaid-Menon remarked in the same way I’d imagine someone would after tasting expensive caviar. They jumped at the opportunity to share the news that they’re taking singing lessons—an endeavor Vaid-Menon claims has blown their mind, given their relationship with their own voice has always been shaky. “I was deeply insecure about my voice because when I was trying to pass as a [cisgender] straight man, my voice was always the first thing that betrayed me,” explaining that even hearing their voice on the answering machine was very difficult.

DarkMatter doesn’t have any extravagant plans in the immediate future, in part because they’ve made a habit of traveling, as the road is now the place Vaid-Menon feels most at home. “I really really enjoy…getting on a flight and landing in some place that I don’t even know.” But DarkMatter will be back, making the rounds at various colleges and universities across the country later this year.

The reason Vaid-Menon is so intent on traveling is highly political. This year has been difficult, according to Vaid-Menon—the trans community recently mourned the 18th pronounced murder of a trans woman of color this year. “We keep on asking, What do we do, what do we do?” Vaid-Menon said, explaining that art is often the manifestation of activism, and of grief. “It’s like the newsfeedification of violence,” they said. “We’re just kind of like, ‘Oh, another murder.’ ”

At the end of the day, Vaid-Menon’s ultimate goal is validation of others across the world. “I want people to be able to come to my shows and be able to feel nourished for parts of themselves that are often scorned, stigmatized, dismissed. I want to create spaces where people can go from crying to laughing to crying again. And I think that that’s a deeply political process.” 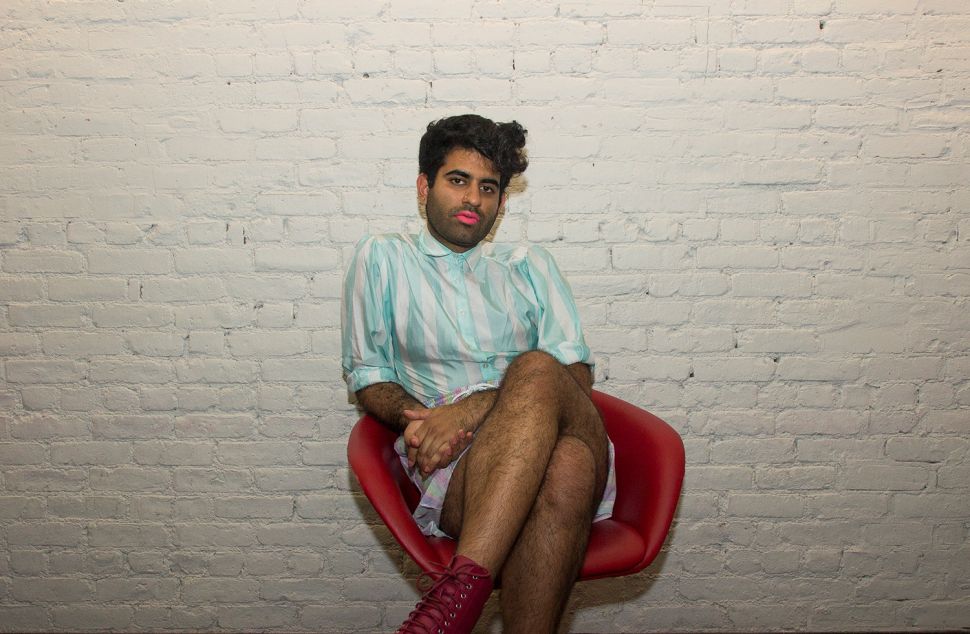