Up against the prospect of an intraparty fight, Democratic Party insiders are right now examining whether there’s

any way to avoid a civil war next year and looking to New Jersey political history for guidelines.

Ideally, South Jersey Democratic Party boss George Norcross III and Essex County Executive Joe DiVincenzo want someone who can “clear the field,” with U.S. Senator Cory Booker the name that most comes to mind that fits that bill. But Booker doesn’t look like he wants to swap a national stage to come back to New Jersey to wallow in a dirty river town in deep duress.

“Maybe there’s someone that no one knows, who can step out and be the consensus choice,” speculated a powerful party insider, trying to determine a way out of the New Jerseypolitical equivalent of Stalingrad.

On paper at present it looks like a very close race between Sweeney and Fulop, who between them in late summer are poised to divide between them – like bloodhounds tearing through bags of dog biscuits – those critical county party lines. That closely contested backroom rivalry means it’s bloody early, with anonymous emails already routinely blasting in an attempt to gash Fulop and Sweeney.

Amid the bruising back and forth, the insider – fearing the toxic effects of a primary splashing onto down ballot candidates – hearkened back to 1973, when a candidate suddenly emerged virtually out of nowhere and changed the game.

Superior Court Judge Brendan Byrne of West Orange was not well know outside of Essex County.

But he had something prized in politics: a timely story.

As early as 1972, then-Essex County Democratic Party Chairman Harry Lerner asked Byrne to run for governor. Incumbent Republican Governor Bill Cahill had been weakened by the indictments of some members of his administration and the country reeled amid Watergate. Lerner and others liked the idea of putting up a former Essex County prosecutor, dubbed on FBI tapes by a gangster as “the man who couldn’t be bought,” who was also a war hero.

So the party faced the prospect of an ugly Democratic Primary with an unknown result, a contest presumably pitting Essex State Senator Ralph C. DeRose against Assemblywoman Ann Klein of Morris County, in addition to a few others early and the usual ballot presence of some enthusiastic no hopers.

Anticipating a very tough fight with Klein, a former president of the NJ League of Conservation Voters and the first Democrat in 60 years to get elected to the legislature out of Morris County, Lerner awarded the potent Essex County line to DeRose, and the state braced for a bloody contest.

Then a week before the deadline, Byrne resigned his judgeship and filed to run for governor.

Though deprived of the Essex line in his home county, Byrne had considerable support in neighboring Hudson. The mayor of Jersey City embraced him and awarded him the party line. His compelling “Man who couldn’t be bought” story line played well to voters eager to exploit Cahill’s vulnerabilities in a general election showdown and recover from the Nixon debacle.

The future governor or his surrogates played backroom hardball to make the math, turn would-be foes into allies, and land him the win.

Middlesex and Mercer proved key pick ups for Byrne in the pre-primary phase.

Tom O’Neil, early on the campaign manager for Klein, recalled that the early field consisted of Middlesex Senator Ed Crabiel, Mercer County power and former Senator Dick Coffee as well as Klein and DeRose on the day Byrne resigned from the bench. The key elements behind him where Jim Dugan from Hudson and Jerry Breslin from Bergen.

“I was deeply involved in the negotiations to narrow the field,” O’Neil told PolitickerNJ.

Crabiel withdrew and went on to be Byrne’s Secretary of State. Coffee withdrew and eventually became Executive Director of the General Assembly. O’Neill went on to become Legislative Counsel to the Governor in Brendan’s first term.

Byrne went to her house on a Saturday morning to negotiate the final details but her children convinced her to stay in the race.

“I was shocked as I thought it was a done deal,” O’Neil recalled. “That was when I left her for the DSC. Much of her field organization of 1972 McGovern campaign veterans also left her campaign and shifted to the Byrne campaign. Despite staying in the primary, Klein was appointed by Byrne to his Cabinet as Secretary of Institutions and Agencies, a predecessor of today’s Department of Human Services.”

Having secured the exit of other players around the state, Byrne, the son of a former West Orange township commissioner, did well even off the line in his home county of Essex. North Ward Democratic leader Steve Adubato – who always showed a knack for picking the winning side – supported Byrne’s off the Essex line candidacy. Adubato’s brother, the late Mike Adubato, successfully snared an assembly seat in a down ballot from Byrne position.

Byrne proved too much for DeRose and Klein and won comfortably.

Furnished with the line in his home county, DeRose couldn’t make up lost ground elsewhere against a candidate with a captivating story. DeRose finished the Democratic Primary third with 95,085 votes (22%), behind Klein (116,705 or 27%) and winner Byrne, who netted a whopping 193,120 votes (45%).

Byrne would go on to beat Charles Sandman, a victor over Cahill in the GOP Primary, in the general election.

Beaming now amid the ongoing turmoil in the Democratic Party ahead of 2017 stands no other than Tom Byrne, son of the former governor, who appears more than willing to fulfill a family tradition of being the party’s go-to consensus pick. But the younger Byrne lacks those quick stroke narrative brush marks that enabled his father to capitalize on the times. Similarly, Phil Murphy allies try to play up early Sweeney v. Fulop fatigue to make the case that surely their man should resolve the party crisis and save Democrats from internecine combat.

The insider dismissed Murphy – who spent two decades amassing a fortune at Goldman Sachs – as hardly the embodiment of a strong, unimpeachable and inspiring public record.

“But maybe, like Byrne, there’s someone out there who no one is yet talking about,” the source mused. 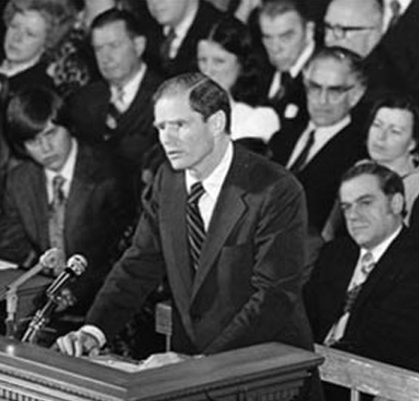