If there is one thing that we need to stop doing as citizens of social media, it’s raising awareness. We have more awareness of what is going on in the world right now than at any point in human history thanks not only to the Internet, but to the instant connectivity that social media provides. Unfortunately mere awareness of any issue actually does nothing, because everyone has their own problems in life and unless something affects them personally, it will drop off their radar very quickly. That doesn’t stop these movements popping up on our social media feeds in a bid to capture our attention though. Kony, the ALS ice bucket challenge, and now the 22 pushups for 22 days to raise awareness of PTSD in veterans.

No matter how well intentioned the people are who participate, it’s all just slacktivism (or clicktivism if you prefer that term). The thing about the 22 push ups for 22 days challenge is that it actually raises very little awareness of the problem. It gives people a statistic that seems pretty high, which as usual isn’t accurate anyway. So what? It doesn’t tell people how they can help, where they can donate, or do much of anything except put someone in a video on everyone’s social media feed doing 22 push ups. Hell, starting a petition and getting a million signatures would probably be more useful, because at least politicians take notice of such things.

The White House has to look at any petition that raises a hundred thousand signatures in 30 days—that’s something that if achieved, will probably be picked up by every mainstream media outlet. Unfortunately the campaign in its current form is basically the ALS ice bucket challenge 2.0, where everyone gets to have some fun and nominate others to continue the chain, without affecting anything much at all. Even worse, the message is already getting confused. First it was 22 push ups to acknowledge 22 veteran suicides a day from PTSD. Then it was about raising awareness of PTSD. Now people are expanding it to suicide and mental health in general.

What civilians don’t understand is that it isn’t just about PTSD from being in a conflict. So many veterans go through mental health issues when they leave the service as well. I battled my own demons when I left the army, and consider the fact that I joined at 26, when I had some experience in the normal world already. It wasn’t like I was some poor kid who joined straight out of school and had no idea how to function outside of the military when I left.

Even considering that advantage, I had a hard time relating to many of those in charge of hiring when I went to job interviews. They’d ask me fluffy, stupid questions that to me had no relevance with what I could do in the position or what experience I had. I felt like I was living in a world where everyone was speaking another language, I can only imagine what it must be like for the guy who has only ever known military life. I see guys even now that I was in the army with, asking on social media what the hell they have to do to get this job or that job. They just can’t make sense of the ridiculousness that is the civilian job market because they are used to the straight talk and get things done attitude of life in the military.

Let me tell you, that scene at the end of First Blood, where Rambo breaks down and complains that he was in charge of million dollar equipment, and when he got out couldn’t even get a job parking cars, it isn’t far off the mark. One day I was an instructor in signals intelligence, the next I was working a casual retail job in a camping store with 16 year olds still in school. I had 6 years experience in the military intelligence field with a bachelor and master’s degree. I know people in similar positions who had to take jobs in supermarkets, as kitchen hands, all bottom of the rung positions that teenagers do.

You go from being in a job where society respects and looks up to you, and where you know you are doing extremely valuable, important work, to being a nobody who sits in a cubicle, stacks a shelf or cleans dishes. It’s immensely damaging, because no one understands what you’re going through. You can’t lean on your team, because you aren’t part of a team anymore. You’re isolated and alone in the world, and depression can set in very quickly. If you don’t have people around you to step in and help, it can all end very badly.

Keep in mind that is my experience, and I didn’t even participate in a conflict overseas. All of my work was done in my home country and I had a relatively easy ride of it. For the guys that come back from a conflict—especially those who are injured and are flown out of theatre while their team is still there, the psychological issues that must be dealt with are orders of magnitude greater.

Imagine being seriously injured, flown back to your country and then being alone in hospital for weeks on end. Your buddies aren’t coming to see you, they’re all still over there fighting. The people that do come to visit probably aren’t doing it very often, and you just can’t open up to them because they aren’t military and don’t understand. And for those guys, it’s even more confusing when they decide to make the move to being a civilian, and they find that there is nothing out there for them but entry level jobs that a teenager can do. They have to deal with the confusion of hiring managers who can’t seem to understand how impressive it is that someone can make important decisions and be a high achiever in the middle of a war zone.

How can you relate to someone whose most difficult day of the past year was spent in a peaceful, developed country in an air conditioned office, when yours was 20,000 kilometers away from your country in 50 degree heat, under heavy fire with backup still a ways off, your friend getting hit 5 metres away from you with maybe a few hours sleep and no shelter?

But the biggest problem I have with the 22 push ups for 22 days challenge on social media is that it does nothing to help solve the problem when it is so easy for an individual to do something that actually will. I’m the last person to bitch and moan about a problem without providing some kind of solution to it, so here are some things you can do to assist veterans you might know who are dealing with PTSD or depression:

For my fellow vets that are all out there doing the 22 push up challenge, if that’s what you want to do, go nuts. You’ve earned the right to make your voice heard in that way if you see fit and I respect your decision. I would suggest that there might be better ways of doing it though—there is a great video doing the rounds of social media of a vet who is quite fed up with the 22 push ups challenge, and one of the comments suggested that something better might be for vets to get on video and talk of overcoming their struggles.

I’d totally support that, because it’s empowering and focuses on the success and excellence of military folk, rather than encouraging victimhood. Even if you just want to get on a video and talk about your experiences in an effort to educate the general public is a great idea, because right now, everyone’s social media feeds are flooded with people doing push ups, so the message is completely lost. People’s attention spans are at their shortest in history right now, so when they see someone doing 22 push ups, they keep scrolling without even listening or reading.

A short video of you talking about your experiences though? That’s powerful, and that’s raising awareness, because every vet has a different story, and stories capture people’s attention. 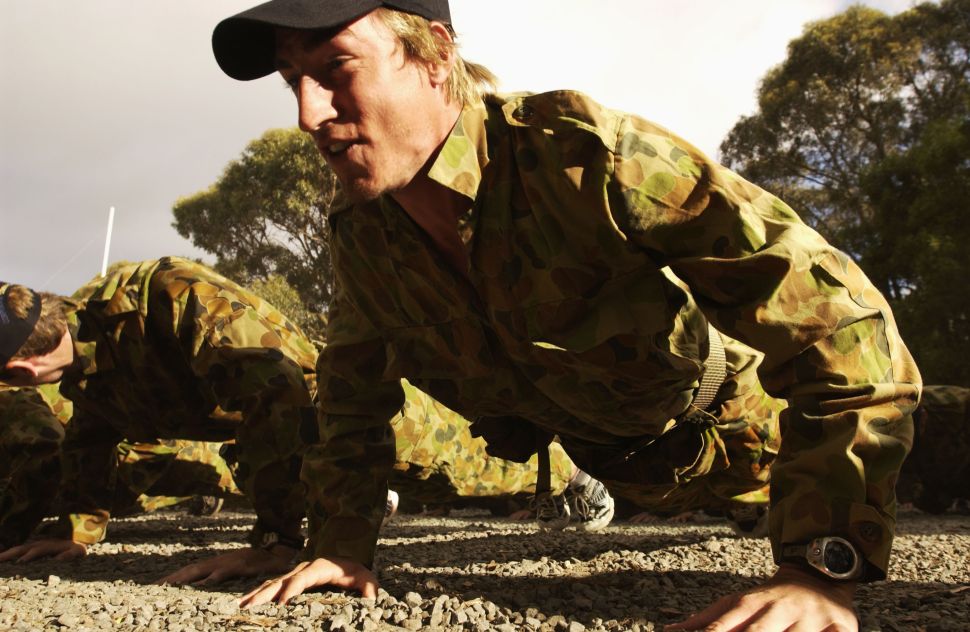