The individual swimming medley does it for me. Butterfly, backstroke, breaststroke, freestyle. Each stroke individually a whole unto itself, different from the others, separately defined and refined—the subject of its own competition and records. And yet when an individual athlete combines these primary individual strokes as elements into one single event—the individual medley—at least for me that new composite whole becomes greater than the sum of its parts

Art and politics also range in their possible part-whole relationships. Compare a classic, realistic portrait or sculpture of an ancient Olympic discus thrower to a contemporary collage. In a successful composition—whether a painting, a poem, a film script—each individual element, stanza or scene exists subordinately, and only in relation to the single overall effect to which it contributes, like an ingredient in a recipe. Of course we can amplify and reproduce for study or celebration isolated details of a masterpiece. But those parts again subsume their identity in the whole.

Contrast this to a typical collage—e.g. a mix of songs, or pictures and objects pasted on a single canvas. Although the assembler aspires to create something more by the composite than the sum of its individual components, a collage, unlike a composition, still primarily constitutes of a collection of largely autonomous parts.  And for those of us who have little taste for them as art or sport, collages never quite achieve the full status of a unified event.

What’s true of athletics and aesthetics also confronts the citizen politically. Olympic nations competing under a single flag historically ranged along a Constitutional continuum. At one end, a homogenous state, governed from the center by uniform laws or command of a single sovereign. At the other, aggregated confederations, or as Hobbes called them “diverse factions leagued,” combining for limited common purposes, with separate customs and codes of laws, constantly tested.

The Declaration of Independence called them the united States of America—notice the small “u” and capital “S”. And most founders believed primary sovereignty rested with the People—collected majorities from their separate states.

On the other hand, some ultranationalists then and now would transform this republic into the United State of America. In sum, whether in art, athletics, or politics, possible constructions range from largely undifferentiated wholes to loose agglomerations of associated parts.

But the Olympics also offer us another contrast—between individual and team sports.

The teams themselves also range from loosely associating individual members to a single undifferentiated group united in a common struggle, willingly submerging, even obliterating their individual identities, all to serve the collective good.

At one end of the continuum we find the arithmetic team, as Prof Paul Gaffney classifies it. Individual players support and challenge each other to improve, but each member essentially performs autonomously and independently of each other.  Individual results “add up” to some composite team score. We’re seeing that now in the competitive team gymnastics phase of this Olympics.

By nature, temperament, and political/constitutional conviction, I tend more toward the arithmetic, politically supportive of individual states as laboratories of experimentation, happiest in my professional life when left alone to do my best and thus contribute to the greater good. Oddly, however, as a spectator, arithmetic, individualistic ‘team’ sport largely leaves me cold.

Slightly more unified, a coordinating team, e.g. the swimming or running relay, sums up individual contributions into a final score. Members, however, briefly but crucially must hand-off and coordinate with each other. Further along the continuum, in differentiated team sport such as baseball which the Japanese have chosen to debut in the 2020 Olympics, team members regularly interact and coordinate with each other to produce a collective result while performing clearly specialized roles: Pitcher, catcher, pinch hitter etc. in baseball; offense, defense, line, runner, receiver, kicker in American football, unlikely ever to be an Olympic sport.

More tightly integrated still, the Olympics have already given us flowing team sports such as soccer, basketball and volleyball, involving players constantly reacting to opponents and coordinating with teammates, assisting and helping each other out, constantly moving kaleidoscopically with shifting roles on offense and defense as passers, blockers and scorers, etc.

Finally, in its most unified and some might say highly developed form, team sport entirely obscures each individual member’s personal contribution to produce a common effect. We could see this in tug of war, if it ever again returns as an Olympic sport. We can already witness this in the women’s four person sculling. The team pulls together, and when it performs at their best, the boat seemingly “lifts” out of the .

In a well-functioning family or nation, members pursue their individual goals while willingly sacrificing for the common good. Aristotle in Politics wisely observed about the range of constitutional good governments what equally applies to athletes and spectators of their sports: No one type fits all.

Different peoples, different individuals rightly find themselves drawn to and best suited for different forms. I cheered on the USA and thrilled at the drama of Michael Phelps winning his record breaking 19th gold medal as part of the USA relay team’s victory (with Phelps’ individual segment time of 47.12, dutifully noted by the media).  But I felt a different, even warmer lift, watching the women’s sculling, witnessing persons as parts of a greater whole, embodied in a boat, literally pulling together, four rowing as one, for the common good, the team transcendent.

Robert Blecker, a professor at New York Law School, continues to cover the Olympics for the Observer through a lens of culture and sport 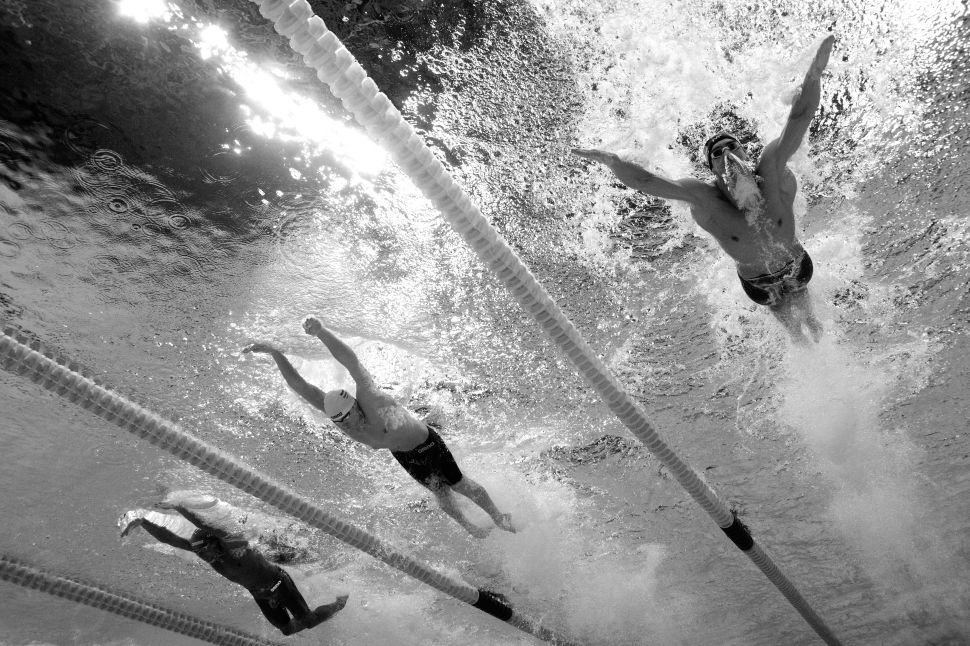