If we’re being completely honest, most New Yorkers are barely aware of the signal light when they cross the street, never mind knowledgable and opinionated about the plethora of world class public art that peppers our urban landscape. Cue comedian Eric André, whose eponymous hit show on Adult Swim is in now its fourth season. Last week, André hit the pavement with Vulture to highlight New Yorkers’ apathy for public art in short video that skewers iconic sculptures from Robert Indiana’s pop-style piece Hope to Elmgreen & Dragset’s temporary installation Van Gogh’s Ear, which features a swimming pool turned on its side at Rockefeller Center.

The consensus? Midtown’s a tough crowd, and André’s hardly the biggest fan of the ways our tax payer dollars have been spent to beautify Park Avenue. Basically, he says what many of us are simply too afraid to admit and it’s beautiful to behold.

Of Hope, André and his interviewees are largely unimpressed, and the same goes for Tom Friedman’s 33-foot-tall stainless steel figure, titled Looking Up. “It sucks, right?”André asks a man in passing, and introduces himself as a representative from Mayor Bill de Blasio’s office. Graciously, the man replies, “Yeah, it does.”

It’s worth pointing out that Indiana’s text-based sculptures have become some of the most recognizable and ubiquitous in the world since he began working in the 1960s. His Philadelphia sculpture Love is albeit synonymous with postcard images of the city and its bold red and blue lettering has been appropriated across pop culture over the years. So the fact that the the average citygoer finds Indiana’s handiwork “boring” is, well, it’s totally unsurprising. Look, New Yorkers have high expectations, and why shouldn’t that apply to our public art too? Its only logical then that people reacted positively to André’s faux suggestions that the city plans to alter Friedman’s work to include genitals and a farting mechanism. Our art should do something, dammit! And that’s exactly why Tony Rosenthal’s rotating Cube sculpture at Astor Place will forever hold a special place in my heart simply for its ability to spin on an axis with a little bit of elbow grease.

André goes on to apply his no holds barred brand of comedy to other works like Jean Dubuffet’s Welcome Parade, which he likens to a visualization of the H1N1 virus seen under a microscope. A fair assessment. It’s here that he pops the big question: “What does it mean, art?” At least one guy has an answer: “Absolutely nothing.” Take stock art worlders.

As for Everclear and Dipset—whoops, André meant to say Elmgreen & Dragset—the security guard tasked with warding off vandals has done his reading, and correctly identifies the work as a loose ode to the missing appendage of the famous Dutch painter. He also happens to be on duty because the artists’ sculptures have elicited violent responses in the past. Their 2005 installation in Texas titled Prada Marfa was shot and graffitied, Elmgreen told the Guardian in March. Considering the damage New Yorkers famously inflicted upon Richard Serra’s Titled Arc when it was installed in 1981, you can never be too careful.

André serves up his best to the informed guard when he asks him if there may be a metaphorical connection between Van Gogh’s severed ear and the case of alleged cheater John Wayne Bobbit, who lost his penis in 1993 when his wife took justice into her own hands with a kitchen knife. “Is it art?”André asks the guard with a smile. “No comment,” the guard answers. Come on, critics! Speak your mind! 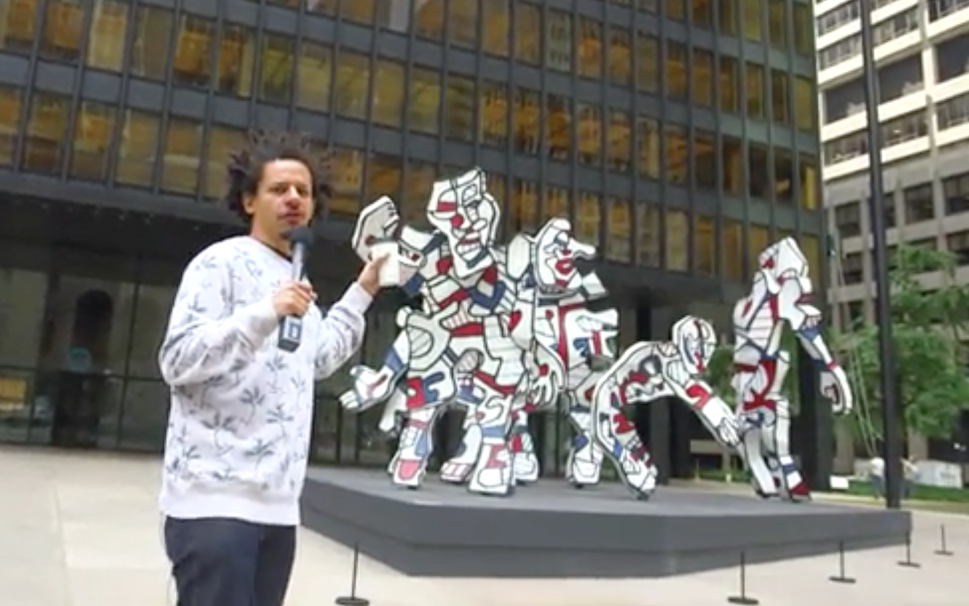