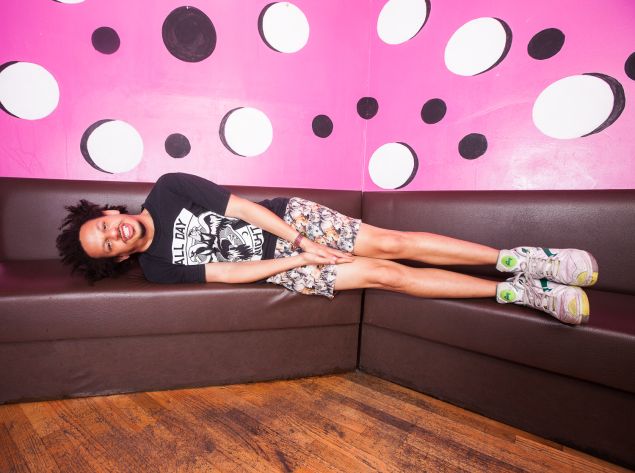 It’s almost noon, and Eric André is still tired. Jet-lagged but genial, he wanders into LES watering hole Max Fish and almost immediately strikes up a friendly chat with owner Ulli Rimkus. Before too long, he’s pissing in the bar’s bathroom, one of the neighborhood’s many throwbacks to the CBGB commode’s graffiti-covered walls, with the door wide open. “Won’t be able to unsee this,” I remark. “Nothing his social media followers haven’t seen before,” someone replies with a laugh.

André’s willingness to debase himself for laughs won’t come as a surprise to anyone who’s seen The Eric André Show, his dizzying 11-minute mindfuck of an Adult Swim show that makes use of common talk-show tropes (house band, co-host, stilted celebrity interviews) before literally ripping them to shreds with pranks and awkward encounters (the set was destroyed on more than one occasion). It’s exactly the opposite of the promotional puffy interviews that define the talk show, but André’s shenanigans transcend the juvenile fuckboi label because he eviscerates his subjects with intention.

On the surface, the show simply continues the aesthetic conceived by Tim Heidecker and Eric Wareheim—low budget props, intentionally bad edits, awkward pauses and non sequitur jokes cue poorly executed jumps to new segments—but these are all jumping-off points for André’s restlessness, a format to provide him with the means to target the things that really piss him off.

While André has long since exposed America’s fetish with ranch dressing (Ranch it up, bro!), he’s since been developing a sharp eye for lambasting our country’s conspiracy theorists, too. André brought back an old man-on-the-street bit called “Society’s Lies” that finds him speaking to wasted conservatives and getting them to explain the absurd, paranoid fantasies they hold to be true. This time, he brings the bit to the DNC.

Well, just outside the DNC, as it were. André’s DNC press credentials were revoked after Democrats saw his shtick at the RNC a week prior—during which he dressed up as a red, white and blue-sequined “Freedom Girl” on the convention floor and took the stage at a rally hosted by Alex Jones, the conspiracy theorist and radio personality behind Prison Planet and Infowars.

The Observer spoke with a decidedly more toned-down André at Max Fish that afternoon (his pissing with the door open aside) about the untapped comic potential of conspiracy theories, the power of not wearing deodorant and what’s next for his career.

Observer: I thought that Between Two Ferns eviscerated the talk show format for me, but then I saw your show.

And we never think of the talk show as a sacred American institution, but there’s something unsettling in seeing it torn up and subverted to that degree. Was the pranking and cut-up style a deliberate move? Or was it more a matter of that you’re on Adult Swim and had license to be as gonzo as possible?

It was just all the things that I’m influenced by in one thing—Jackass, Tom Green Show, Da Ali G Show, Chappelle’s Show, Jiminy Glick, Space Ghost…

All have a fair level of satire in them too, more than just a man getting hit in the groin by a football.

Yeah, it wasn’t so academic.

Did you ever get the Sprite endorsement?

[He laughs] No, never got that Sprite endorsement. We said it’d be funny if we actually got sponsored by Sprite this year, but I’m glad that we didn’t because it fucks with that joke. It would have delegitimized it.

Before we even get into conspiracy theories and your time with Alex Jones, I have to wonder, who trolls the trolls? Is that your job? News satire is really rich with calling people out, but nobody else is going after the crazy celebrities and getting on their level like you. What interests you about that?

Well, the Alex Jones thing at the RNC was total coincidence. We didn’t even know he was there, and we love Alex Jones in our writer’s room.

So, Tim Heidecker and Vic Berger were just there to tape the Superdeluxe special?

Yeah, that was unrelated. I actually forgot that Tim and Vic were going out there until I ran into them at that thing. We were going to a Drumpf rally, and that was the first thing we shot—we were just going there to warm up. And five minutes after we get there, Alex Jones got up onstage. I was like, “Holy shit, I should get up onstage,” and then I couldn’t get onstage. Then as I was walking away, he said, “Bring the Daily Show guy up here!” I was thinking, “Great, he thinks I’m Trevor Noah or something.” 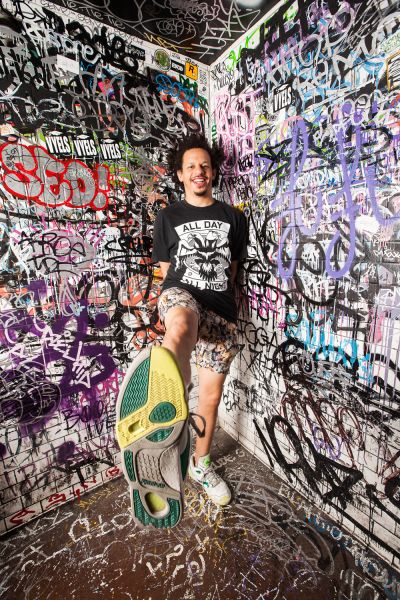 [He laughs] Or Wyatt Cenac. I’m not sure who he thought I was.

No, Wyatt Cenac! [Both laugh]

What interests me about people like Alex Jones is how they have their own independent ideology. They’re leaning right for this election only as the American narrative runs amok. Their conclusions are so overblown and fantastical.

Wasn’t Alex Jones a left-wing guy at first? He hated Bush and Cheney.

For sure, but it’s just crazy how people like that even exist in America. He sells iodine supplements on his website.

Well, this is the replacement. “The shit they’re giving you doesn’t work, so you buy this shit on my website.”

And you won’t get polio if you eat a fucking iodine supplement! That’s ridiculous.

But your interest in conspiracy theories goes beyond that. You have the “Society’s Lies” bit on your show. It’s safe to say that kind of thing interests you. That’s sort of an untapped area for comedy, isn’t it?

Yeah. We’re into conspiracy theories in the writer’s room—the more obscure and crazy the theory the more we’re excited talking about it. Lizard reptilian aliens…

The people who believe in that shit take it very seriously.

Super seriously. It’s a legit thing for sure. 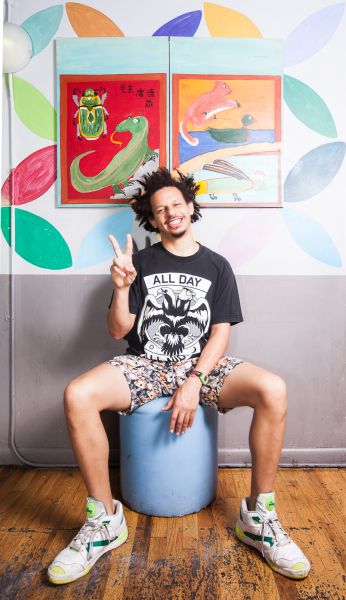 Man Seeking Woman seems a comfortable place for your humor to live in the 30-minute time slot, while Don’t Trust the B was a bit more mainstream prime-time, but Eric André Show is by far the more edgier and strange. What’s next? Are you looking to get into film? These Adult Swim shows often seem a format experiment for actors, writers and comedians.

Mmhmm. An incubator. Yeah, I am. I get a little superstitious and don’t like to talk about stuff until it’s happening, but yeah, for sure. I’m using this as a way to test for more long-form, bigger projects.

Okay, we’ll leave it at that.

[He laughs] Sorry for such a vague fucking cryptic answer!

You’re from Florida, which is absurd in its own ways, too. Did that inform your comedy, the absurdity of it? Boca Raton’s kind of a fucked up place, even though it’s super clean and seemingly safe.

And you use that in your comedy.

Yeah, well, it contributed toward me getting out of there immediately, so for sure.

I didn’t wear deodorant all season, I didn’t shave, and I grew out my fingernails like Howard Hughes.

Really? How deep does the gonzo aspect of this pranking go for you? I see the horrified looks on your guests’ faces. The lady from Dance Moms was terrified of you.

Yeah, she was…We only use real reactions. No fake reactions—that’s the rule.

So the fingernails and the BO make you a method actor.

Yeah, it’s prank-based, so we want everyone to know that it’s real. Didn’t go out in the sun the whole year, didn’t wash my hair the whole time, didn’t clean my suit the whole time. I made sure I stunk.

But on the other end of the spectrum, in Man Seeking Woman you’re the dude who slays all the time. The guy who has it together, effortlessly (and in torturous contrast to our main character). How do you reconcile those two roles? Which one is closer to the real you?

I think maybe I’m somewhere in the middle, but The Eric André Show is pure id.

And the next thing that you want to act in will be a more long-form project that you write?

Yeah, I don’t know if I ever want to ‘act act’ again. I think Man Seeking Woman will probably be it. I think I only want to act in something that I wrote. There’s too little out of my control when I’m just an actor for hire, Joe Actor, and I don’t think that’s what I want to do with my comedy anymore. I need to be on both sides of the camera. 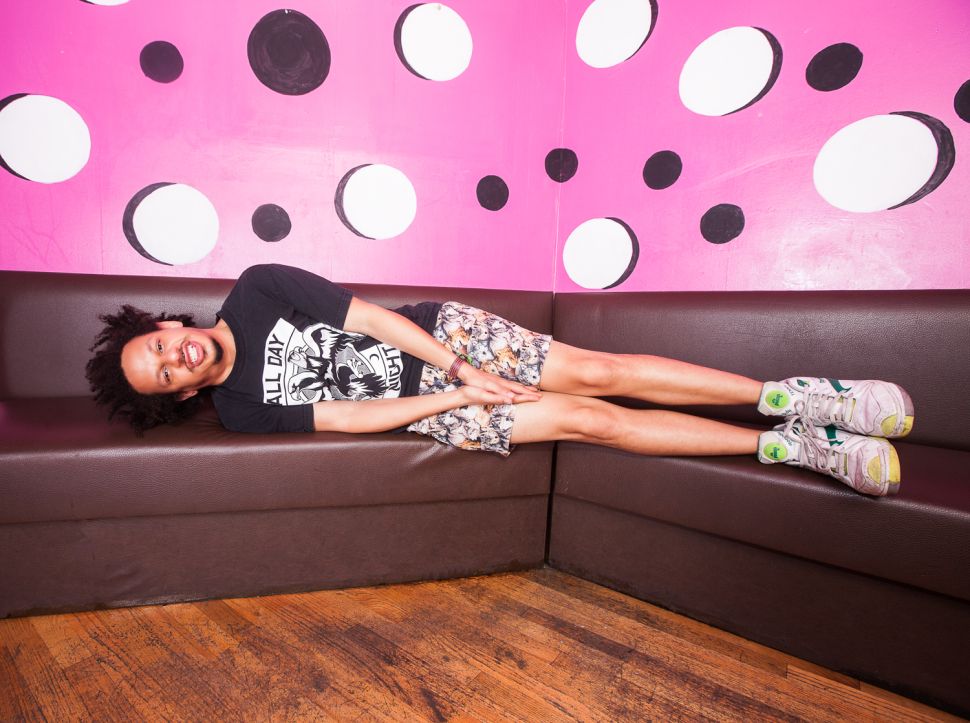