BELMAR — Democrats bracketing with Hillary Clinton got a major vote of confidence Wednesday. Senator Cory Booker gave his blessing to candidates in one of the state’s most politically volatile counties that night at a campaign event hosted by Monmouth County Democratic chairman Vin Gopal, offering praise for the chairman who has turned a one-time Republican stronghold into contested territory by helping to elect Democratic State Assembly members and mayors.

Booker, fresh from his stint at the Democratic National Convention in Philadelphia, told a packed crowd at Belmar mayor Matt Doherty’s home that he expects Gopal’s county slate to pull off the same kind of surprise victory that Assembly members Joanne Downey and Eric Houghtaling (both D-11) saw in 2015. With districts that have resisted the favorability of New Jersey’s current legislative map toward Democrats, this year’s county elections could be a referendum on whether swing voters have reached a tipping point. Booker described Gopal as pursuing that aim of turning the county blue with “a ferocity that would have put Sherman to shame.” The former Newark mayor drew applause from the crowd when he recounted Bill Clinton intisting to him at the DNC that county elections matter, but got a less enthusiastic response as he paused for emphasis after describing Hillary Clinton’s nomination as “historic.”

“What this county has shown is that we here in Monmouth, you’re reflecting the best of the American spirit. It’s this idea that we are not going to give up no matter wha the odds are, no matter what the obstacles.” he said.

“In New Jersey, we lose local elections every single presidential year,” he continued. “I’m telling you, tens of thousands of people walk out without voting down the ballot. We need to let folks in this county know that this election is not just about this cycle, this year. But what Vin is showing through his leadership is that every election builds on the one before.” The crowd at Wednesday’s event

Gopal has already made his intentions clear with respect to this year and 2017, when he hopes a gubernatorial year will lead to a Democratic sweep of Monmouth County during statewide elections for the Assembly and Senate. If his carefully crafted slate succeeds in this year’s county elections, Downey or Houghtaling would already have Democratic successors waiting in the wings in the event of a successful Senate run against Republican incumbent Jennifer Beck (R-11).

Those candidates are former Army Captain Sue Fulton for freeholder, Army Reserve colonel Jeff Cantor for sheriff, and New Jersey National Guard Army Captain Vincent Solomeno. Doherty himself is also running for freeholder. Gopal is betting on the strength of a county slate long on veterans and servicemen, and Booker said he has confidence in his choices.

“You guys are on the verge of electing a colonel, a veteran,” he said. “I may be the senator but if there’s a hill to charge, I’m going to follow him up that hill.” 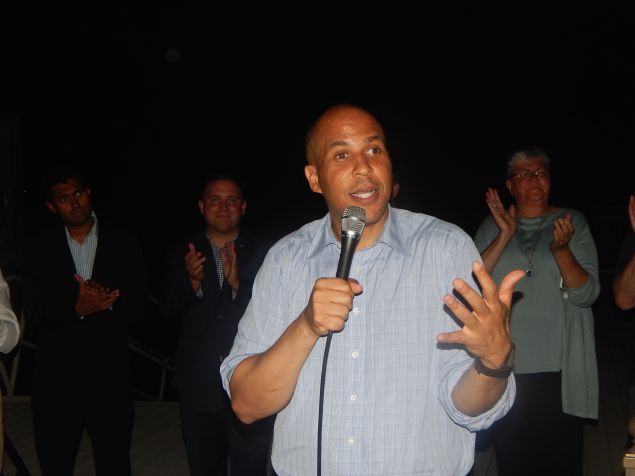