Cipriani 42nd Street was bedecked in Swarovski crystals at last night’s 20th Annual ACE Awards presented by The Accessories Council, so much so that even the podium from which the likes of Sarah Jessica Parker would make their acceptance speeches was made of the glittering element. The yearly gala, which usually takes place in November, but was rumored to have been rescheduled to avoid interference with the 2016 election, honored the greats in philanthropy, design, retail, and even fashion finance in the case of Rosenthal & Rosenthal’s Michael Stanley who took home the Business Leadership Award presented by Rebecca Minkoff. He aptly entered the stage to Pink Floyd’s “Money.”

Among the most anticipated guests was Ms. Parker, introduced by NBC Morning Joe co-hosts Joe Scarborough and Mika Brzezinski . “She is beyond a single name,” said Mr. Scarborough, reading Ms. Brzezinski’s speech as she had lost her voice. “You only need letters. There’s FDR, JFK, and even LBJ. There’s only one SJP.” The newly inaugurated shoe designer humbly accepted her award, a miniaudiere designed by Judith Leiber Couture and Swarovski. “As many of you in the room know, when you start a business, it’s the support of your peers and your industry that is most meaningful, and the most encouraging,” she said. Ms. Parker’s fellow actress Julianna Margulies also took home an award alongside costume designer, Dan Lawson, for her fashion influence shown through her well-heeled looks on The Good Wife.

Ms. Parker was followed by The Sartorialist Scott Schuman, who passed off the Brand of The Year Award to Ray Ban, which was accepted by the President of Luxottica Wholesale North America, Fabrizio Uguzzoni. During his acceptance speech, he offered up a pair of of the eyewear megabrand’s signature clubmaster frames to the entire audience, queuing waiters to enter with silver serving trays piled high with Ray Ban bags. “It’s hard to follow Ray Ban,” MCM’s Ella Kim said, accepting her Trendsetter Award on behalf of the German leather goods giant. “That was such an Oprah moment.”

The most touching moments of the evening included a tribute to Bill Cunningham by former LA Times fashion editor Mary Lou Forbes, who recalled her trips to Paris with the iconic street photographer. Vera Bradley co-creator Barbara Bradley Baekgaard also gave a brief but powerful speech as she accepted her Humanitarian Award for her brand’s support of over 1,000 charities including the Vera Bradley Foundation For Breast Cancer, for which they have raised over $25 million. “I think this means so much, because this is an award not for what we’ve done, but for what we’ve managed to give away,” she said after being introduced by O, The Oprah Magazine’s editor-in-chief, Adam Gassman. “Really, it’s something I’m very, very proud of – probably the most proud of anything I’ve done in my life.”

The luxury market was also well represented. Kering, the parent company to Gucci, Bottega Veneta, and Saint Laurent, took home the Sustainability Award, and shoe designer Paul Andrew was lauded for his successful launch of his eponymous luxury shoe collection. Coach creative director Stuart Vevers was given the final award of the evening as Designer of The Year. “I wanted to say a thank you to the fashion community here in New York,” said the British transplant designer who has shaken up the reemerging luxury house. “America has been so open-minded to me, and my time here. The press, the stores have all been open to change, and have embraced someone and something new and different. I hope America continues to open its doors to outsiders like me in the future.” 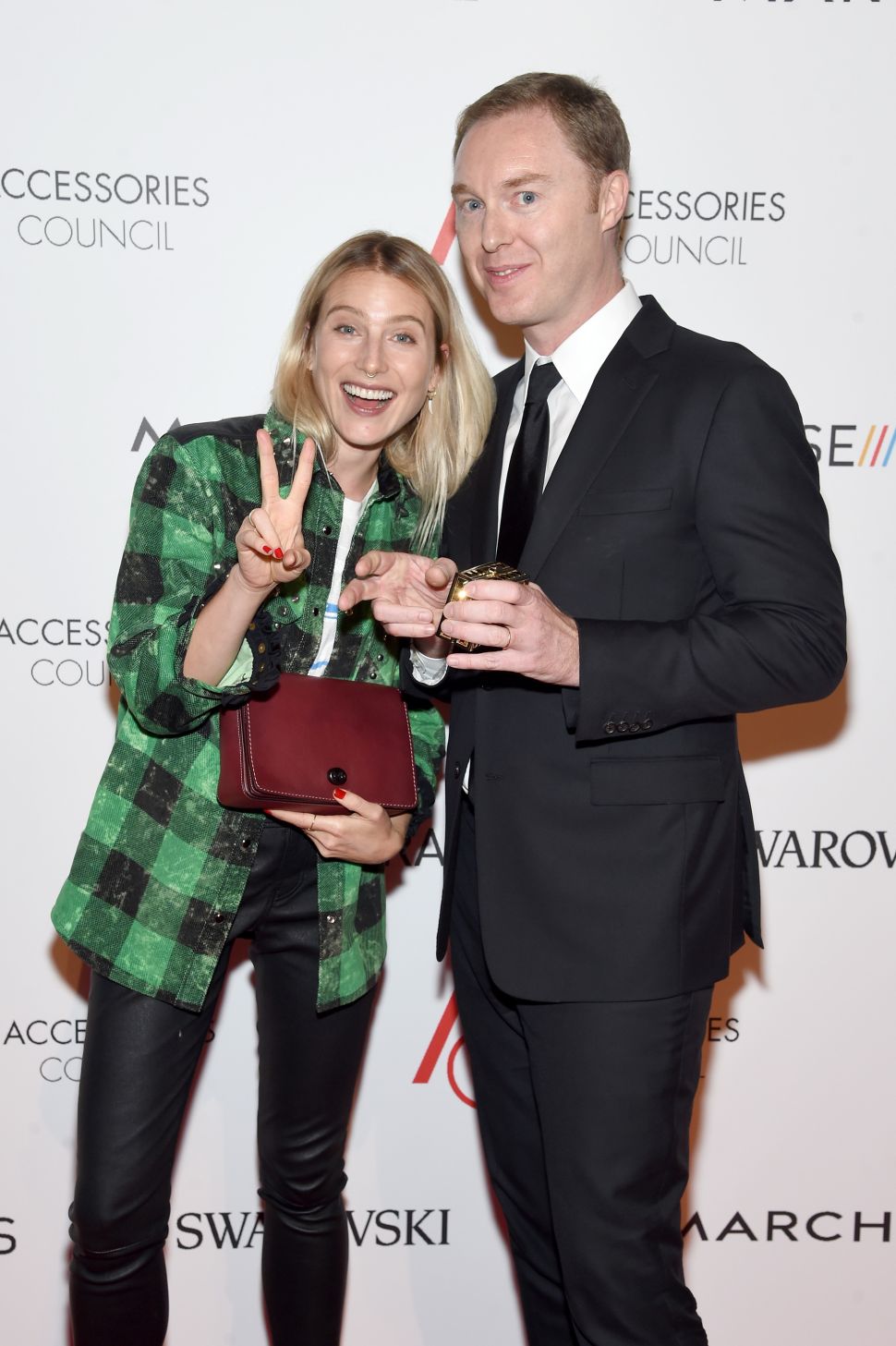