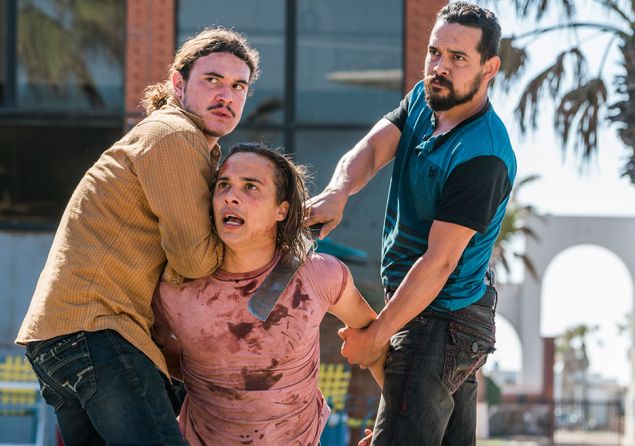 After almost a year, I’m back on the Fear the Walking Dead beat, mostly because I heard Nick was drinking his own urine while stranded out in the desert last week and I thought “Boy howdy, finally something I can relate to.”

My first episode back, last night’s “Los Muertos,” reminded me of why I fell off the Walking Dead spinoff-train like a zombie tumbling over a hotel balcony railing. I don’t enjoy wishing death on people. But there are very few, if any, characters on Fear the Walking Dead I would mind losing to a swarm of the titular undead meatsacks.

And hey, that’s a problem! Usually when you’re dealing with a post-apocalyptic scenario your narrative is driven by a group of survivors the audience, you know, wants to survive. But Fear the Walking Dead has such a weak grasp on its main players that the surrounding gore and gloom–which, admittedly, is always impressive–has no lasting impact. I repeat, Fear the Walking Dead is struggling to make the actual end of the world have permanent weight.

Take Nick, for better or worse Fears’ most complex character, who is from one moment to the next apathetic or engaged. Bored or terrified. Indifferent to his surroundings or caring so much he risks machete amputation to steal a sad child Ding Dongs. Watching Nick navigate his surroundings is like watching Paul Rudd clean up his broken plate in the original Wet Hot American Summer.

Which is a shame, because there is a ton of interesting developments happening at La Colonia, not the least of which is Alejandro’s claim that he was bitten but not turned. “Bullshit,” Nick says, astutely. But Alejandro has built himself a devoted followers with that claim. What sets this particular death-cult-disguised-as-sanctuary from the dozens of other death-cults-disguised-as-sanctuary in the Walking Dead universe is that the members of La Colonia welcome the plague instead of merely hide from it. They see it as a cleansing, a big blood-covered reset button for the entire.

“From death we come,” they chant. “And to death we deliver ourselves.”

But again, it’s nearly impossible to tell how we should react to all this, because Nick’s reactions are just fifty shades of “Buh whaaaa?” It’s only outside the gates of La Colonia with Lucia that we get something from him, and even then it’s almost by accident. To be fair, I love the idea that local drug dealers opened a heavily guarded supermarket in a warehouse after society went to hell, charging people by the cart. That’s clever, even if filling the scenery with beer cans that just say “cerveza” on them is a little heavy-handed. It’s an interesting scenario, with a genuine sense of peril and actual stakes, and Nick once again bullshits his way through it.

And yes, on some level that’s the point of Nick’s character–he’s half in denial, half over his head. But man, do I wish these guys machete’d his hand off. A Nick who may or may not have a hook for a hand but definitely understands that every facet of the world will try to kill him now is far more interesting than a sleep-walking angst-scarecrow who lucks out of danger thanks to vague knowledge of Oxycontin.

Meanwhile, my feelings on the rest of our crew can be succinctly summed up by Strand’s face in this still:

Strand, Madison, Ofelia and Alicia rummaging through an abandoned hotel while ruminating on life and death is both Fear and The Walking Dead proper at its worst. It’s sadness for sadness’ sake, characters trying to convince themselves they should still exist in the face of utter hopelessness. Which is something that can work–Strand and Madison getting drunk and imagining hypothetical, apocalypse scenarios comes close–when it’s not surrounded with enough unrealistic stupidity and stilted dialogue to make a cogent argument these characters shouldn’t exist.

Playing a piano and smashing glasses against the wall while hiding from zombies is so noticeably, out-of-character boneheaded that it disrupts any sort of story being told. It simply exists to get zombies into the scene. It’s as annoying as Alicia knocking on a bedroom door to see if there’s any dead inside. It’s as cheap as the Ofelia-leaping-to-her-death fakeout, which we earned through yet another zombie-who-hung-himself moment.

And it’s that cheapness that is such a bummer, because the visual of hundreds of undead lazily plummeting off the hotel balconies like the Wights from “Hardhome” took a summer vacation is, for lack of a better word, so fucking cool. Fear the Walking Dead does great set pieces and little horror moments, and “Los Muertos” is no exception. Lucia pinning a walker to the wall and opening his throat to use as her personal blood fountain? Spectacular. The episode-opening sequence, in which a man offered himself to a horde of undead to the sound of Indiana Jones and the Temple of Doom-style chanting? Amazing.

But after a while, watching cool moment after cool moment with no actual emotion behind them starts to feel like watching an annoying child play with its toys. If that’s the case for good, well, for once I’m with Madison. Pass the tequila.

Strand: “That place will be picked clean.”

Ofelia: “Could be crawling.”

Alicia: “Better indoors than out.”

That…is not a conversation. 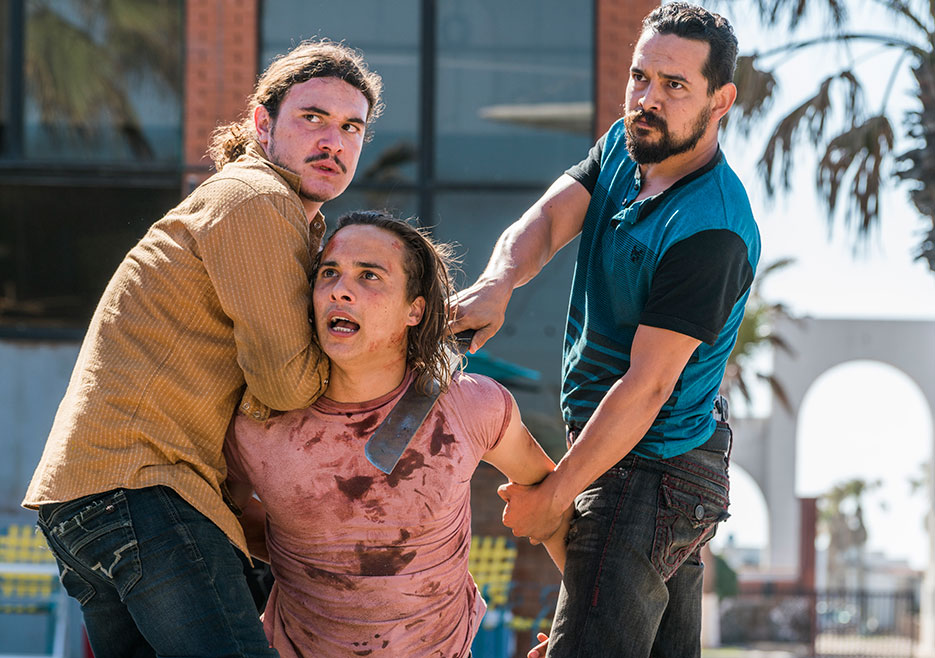