When former United States Sen. William “Mo” Cowan was a teenager growing up in rural Yadkinville, North Carolina in the 1980s, he opened the front door of his family’s home one evening to discover a few white men had tried to burn a cross on a neighbor’s lawn. The men were furious that one of his neighbor’s black children was dating a white kid. Cowan, the black son of an assembly line worker and a seamstress in a textile mill, was more incredulous than angry. “I remember thinking: ‘Why would you care enough about who someone was dating to do something like that?’”

Cowan went on to graduate from Duke University and obtain a law degree from Northeastern University before joining first one Boston white shoe law firm and then another, earning a reputation as someone trusted by those on every rung of the law firm food chain and people of every age and background. In 2009 the 40 year-old Cowan, well-known as a mentor to young black professionals in Boston, was tapped by Massachusetts Gov. Deval Patrick to be the Governor’s legal counsel. The next year Patrick made him his chief of staff and, in 2013, when then-Sen. John Kerry was selected by President Obama to be secretary of state in his second term, Patrick appointed Cowan to serve as the state’s interim United States senator. He served for four months before Rep. Ed Markey won a special election and then, after a stint at Harvard’s Institute of Politics, returned to the practice of law.

Admired by senators on both sides of the aisle for his disposition to bipartisanship during his short time on Capitol Hill, and highly popular in part for his natural gifts at forging bonds between people of very different upbringings, Cowan has thought a great deal about race in America, about the bitter divides increasingly evident when it comes to issues of racial justice and about the ratcheted-up ugliness that seems lately to be metastasizing around those issues.

The shrillness, or worse, of some in the Black Lives Matter movement, says Cowan, does not and ought not take away from its central point.

He is troubled that some whites react to the black community’s deep anger over the killings of blacks by law enforcement, captured so vividly on video on what seems like a weekly basis, with rage or denial, rather than acknowledgement of the obvious.

“Here’s what I’ve been thinking about a lot lately,” he says. “Can we simply agree that when we say that America is the greatest country on the planet, that America isn’t perfect?” For Cowan it ought to be an easily-grasped proposition that one can celebrate America’s greatness and still openly discuss its failures, including its failure to eliminate racism. “It’s messy,” Cowan says. “America’s history is messy. We should be a work in progress, which is hard to do if we don’t acknowledge race, including the stain of racism that still plagues the country.”

How is it, Cowan asks, that black Americans are supposed to view the example of Flint, Michigan, where a predominantly non-white community “is left to drink contaminated that everyone knows about, and nothing is done about?” Why, he wonders, is it not a reasonable question to ask: do black lives matter as much as everyone else’s? The spate of publicly-recorded incidents of police beatings or killings of black Americans who are either not doing anything aggressive or are not doing anything at all, Cowan says, has caused black Americans to reluctantly conclude “My life seems to be more expendable than others.”

The venom directed at President Obama, the nation’s first black President, has served to harden black America’s belief that what Cowan calls the residual “stain” of racism is nowhere close to disappearing. Indeed, it is difficult not to conclude that a good bit of the ad hominem vitriol directed at Obama over the last seven years is related to his race, to the very fact that he is America’s first black President, and to the anger some on the right feel because the racial and ethnic face of America has changed, irrevocably, and will never look the way it has in the past again. The reason it is difficult not to conclude as much is that there isn’t an explanation for the depth and nature of that vitriol which seems rational.

Cowan has been a staunch supporter of the president, but it should also be possible to disagree profoundly with the Obama Administration’s often ugly campaign to sell a dangerous deal that will hand Iran nuclear weapons in about 15 years, to be appalled by the President’s reluctance to acknowledge the threat posed by Islamic extremism and to shake one’s head at his Administration’s counterproductive indulgence of Palestinian rejectionism at Israel’s expense, without losing one’s rocker and joining in obviously unfair, untethered attacks on him. And precisely because some of the attacks are so obviously unfair and untethered, the question naturally arises: are they merely irrational, or are they stoked by racism? It isn’t only black Americans who wonder.

What, for example, should one make of attacks on Obama—who inherited an economy in extremis and on the precipice of a meltdown, and who must fairly be credited with taking the difficult steps that saved it—that he is to blame for an imperfect recovery? Or of excoriations of him for responding to what everyone knows full well is an unacceptable state of affairs–namely, that families who need medical treatment can’t get it because they can’t pay for it—by pushing through legislation that provides that medical care to millions of people who otherwise wouldn’t receive it? Or of the hours of media time and the tonnage of ink expended pushing the demonstrably false line that the nation’s first black President wasn’t really American? How should black Americans regard those kinds of attacks if not by believing that they are so over-the-top as to require the conclusion that they are race-based, that this level of irrationality would not, to put it succinctly, be leveled at the President if he were white?

Some of the attacks on Obama are crazy: accusing him of having worsened race relations in the United States—or to have contributed to the shootings of police officers in Dallas or elsewhere—is obscene. Those who have taken leave of their senses and made this accusation may as well make the more straightforward, but more transparently despicable, accusation that because he is a black man and the President of the United States, his occupancy of the White House is to blame for racial tensions and the murder of white people.

One piece of “evidence” used to support this lunacy is that the President noted at the time that the Cambridge, Massachusetts police’s arrest in 2009 of Henry Louis Gates—a world famous 59-year old Harvard professor who had multiple hip and knee replacements and has trouble walking, and who has lived and worked prominently in Cambridge for decades—on the false charge of criminally breaking into and entering his own home, was “stupid” on their part. His observation seemed a good deal like stating the obvious, and his invitation to Gates and the police officer to share a beer with him at the White House a few days later was both brilliant and an act of grace. And his supposedly inappropriate remark that Florida teenager Trayvon Martin, gunned down on the false belief that he was a criminal rooted in turn in the overarching fact that he was black, was what his son would have looked like had he had a son was not remotely inappropriate.

The President has done nothing whatsoever to encourage violence in America, least of all by what are gentle, broad-minded statements and acts whose purpose is to tamp down tensions rather than to exacerbate them, and those who are disposed to be minimally fair ought to so stipulate, whether they are Republicans or Democrats.

Neither Mo Cowan’s successes nor his celebrity status in political circles has dimmed his consciousness of being black, and of being a minority in many of the power corridors in which he travels.

“I’ve done many things but I’m always conscious of my blackness,” he says. Nor has it diluted his pained awareness that he, like other black Americans, is going to have to have “The Talk” with his young children before they get too much older. “I’ll tell them, ‘If you’re pulled over by a police officer, no sudden movements, keep your hands on the steering wheel at 10 o’clock and 2 o’clock, clearly visible,’” he says “Roll the window down so you can hear the officer and he can hear you. No matter what the circumstances, speak respectfully to the officer. Even if you are taken into custody, even if you feel it is unfair, go peacefully and call your mom and me when you can. I’d rather have to bail you out of jail than identify you in a morgue.’”

The shrillness, or worse, of some in the Black Lives Matter movement, says Cowan, does not and ought not take away from its central point. “Don’t dismiss Black Lives Matter,” he says. “Instead, ask people: ‘What’s at the root of your pain?’ There will be many black Americans who’ll tell you they’ve learned to see the world the way white Americans have. They don’t always see white Americans seeing the world through their eyes.”

Mo Cowan is a partner at Mintz Levin, where the author works. 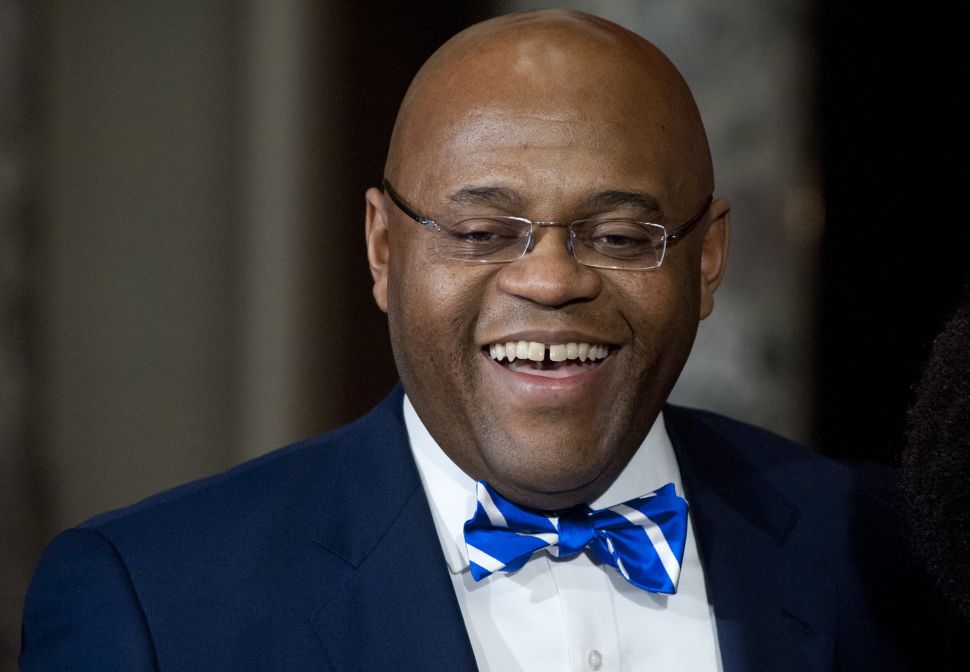