Earlier this year, the singer-songwriter Gallant dropped his debut album, Ology, to critical acclaim. Listen to a single like “Open Up” once and it’s not difficult to figure out why. Gallant’s knack for swooning crisp yet raw, familiar yet unique R&B ballads has catapulted him to fame, and he continues to build a buzz that’s been steadily growing since he released his debut EP, Zebra, in 2014.

Regardless of the heights Gallant has climbed though, he still feels like, and chooses to be, a show business outsider turned off by the industry glamour.

While on break from a tour that brings him to the Music Hall of Williamsburg tonight and Bowery Ballroom tomorrow, Gallant spoke to the Observer about the secrets of his creative process, his rise to critical acclaim and how he learned to set aside the expectations of success and tackle his work with heart and truth.

Where are you right now?

I’m in L.A. I just got back from South Korea yesterday.

Oh, nice. Is that where you live now?

Yeah, I’ve lived here for about two and a half years.

It seems like you’re on fire. Ology is acclaimed, which to me makes perfect sense because it’s one of those albums where every track is great. I heard “Weight in Gold” and thought, “Oh man, that song’s solid.” Then I heard “Bourbon” and I thought, “Wow, that song is killer, too.” Then I heard “Episode,” and I was like, “another powerhouse.” Are these songs that you’ve been working on for awhile, or was it just for the sessions for the album?

It was a pretty quick process creating the songs for the album for the most part, almost like a first thought, best thought kind of thing. The whole point of me writing it was just to be able to get over certain things and grow and evolve as a person.

I was really just focused on that self-improvement aspect of it. I didn’t really think about anything else when it came to the songs. Most of the time working on the album was me trying to be as honest as possible and lyrically trying to dig up all the dirt, bringing it to the surface.

Was that cathartic to do? Because the songs sound very personal.

Yeah, definitely. What makes it different for me is that it’s really about my relationship with myself. I think that it gets pretty trite talking constantly about other people and very normal things that everyone experiences. I found it interesting to dig deep and look at everything from a one-sided perspective and try to say it as ambiguous and metaphorical as I possibly could, in order to accurately describe what it’s like for me specifically.

Let’s back up. You’re born in Washington, D.C., then you moved to Maryland, and then you wind up going to school at NYU. When did you realize you wanted to dive into music?

I think it was more a habit that I had all of my life because I was very quiet, almost mute, as a kid. I didn’t really get a lot of opportunities to be outward or vocal in any way, and I didn’t even really want to, so music is what I did when I had a lot of time alone. It was just a habit that kind of got out of control.

I didn’t really think about it as a career until pressure started building from my peers late in high school and early college, when you’re just surrounded by that careerist culture where people are just in constant pursuit of something and will do whatever to convince everyone around them that they’re super-focused and super-driven. I definitely got pretty disenchanted with that whole notion pretty quickly.

I wouldn’t ever even say that I took it seriously as a career until two or three years ago, but what was really important that it was helping me grow and evolve. The writing process was so essential to me being able to break down all of the walls that I built up between myself and the world, so that’s what motivated me to keep going more than anything else.

You graduated NYU in 2013 and then you move to Los Angeles. I was wondering what your breakthrough moment was, being one of the many people who go to L.A. to try to pursue music. How did you make it work?

Well, I just wanted to live. I graduated when I was 20.

How did you graduate early?

I started school early and did a lot of summer school, so that helped me finish in three years. I kind of had this sense of freeodm-ish. I didn’t really feel pressure and I knew that I had rejected anything that had to do with pursuing music as a career. That whole thing was just whack to me, it didn’t make any sense. I got over that and was just focused on being in an environment that felt closer to who I was and what I enjoy, which was in L.A.

How did your label, Warner Brothers, find you?

Well, I was doing shows off the back of this EP I put out called Zebra and I wound up meeting people through that. It was all completely unexpected. I was in a state of anti-music industry, so it really didn’t matter to me who in the industry was listening to it.

Zebra was an EP you made…where? At your place?

Yeah, I rarely ever go to the studio. I made it in my bedroom. I have a friend named Felix Snow who I met in New York who worked with me on it. Some things we even did in someone’s AirBnB on USB mics. However I made it didn’t matter, it just had to be true and it had to be raw. I wasn’t focused on impressing people, like posting pictures on Instagram of me in the studio with hashtags like #StudioFlow. I just wanted to evolve and grow lyrically.

Then I started doing shows and slowly I started meeting people in the industry who reaffirmed my belief that everyone there is just full of B.S. But, there were maybe one or two people that completely subverted that stereotype for me, and those are the people I ended up working with. More than any business, it’s based on a friendship level. That’s when it started to feel right.

I feel the same way as a writer who’s just working through it. I always have a healthy amount of skepticism of the industry. Were your feelings about the industry shaped by any one particular experience? What made you not want to play into the game of posting Instagrams like you mentioned, or being as fame-driven as some other people?

It mostly comes from stuff that I saw in New York. My peers in New York, they were so interested in everything that is a result of somebody being honest and truthful and having something on the line. They’re more interested in the sheen that’s over it and don’t really understand the causes of nature that fit into that aesthetic. They think they can skip everything else and jump to fame.

There are certain mentalities and certain [NYU] programs that kind of perpetuate that kind of delusion. I guess as I started to dive deeper into the psychology of the whole thing, I started to realize that it can be a pattern that people can get caught up in.

“However I made it didn’t matter, it just had to be true and it had to be raw. I wasn’t focused on impressing people.”

It made me a little self-aware and I started to look at my own situation in New York. Without getting too detailed about it, I got mixed in with the wrong crowd and was believing one thing when something else was actually happening.

Once I dug deeper and understood, “Hey, wow, this other thing is actually completely bullshit” and I was existing as if I thought it was doing something for me, it gave me every reason to believe the things I started to believe about the industry and the people who are in it. Those ideas are definitely challenged when I meet people who are genuine. But my experiences in New York as a whole led me to be just really, really skeptical and really cynical about the industry.

What’s interesting is that when you developed these notions, you were this kind of industry outsider. Now, you are as inside as you can be. You vaulted over the gate and now you’re ob the other side, and I’m just wondering if your perspective on the industry is the same or if it’s different?

[Laughs] It’s mostly the same, but it’s different in some ways. For me, it’s really a team effort. There’s all of these people who are the milk and cream and butter of the whole thing that makes up the bread of the industry itself. When you get into these person-to-person relationships, it isn’t always easy. But a lot of people on my team are thinking about things in different ways.

Even through I know the situation is very industry-esque, when I look at the conversations or the people that make up my team, it still feels very different from what I think a lot of the normal industry conversations are like.

As an artist there’s a lot of schmoozing you have to do, a lot of hands to shake and a lot of asses to kiss. Do you like that process, the socializing, or are you just about the creative side?

It’s funny because I really don’t do a lot of that. I have a lot shows and people come to those shows, which is cool. Sometimes it may make sense for me to play some shows that are quote-unquote industry events, but I’m certainly not walking around with a cocktail in my hand laughing at people’s jokes.

I honestly can’t even remember any shows I played that I stuck around for. I’m kind of the guy who after a show will go back to my bus or hotel or whatever and play video games with my drummer for the rest of the night. Maybe right now I’m just lucky to have not really experienced a lot of that yet.

Before the release of Ology, were you apprehensive or nervous because of how personal it is to you? Album releases can really go in any direction. Most of the time they’re met with complete indifference because there’s so much noise in the industry and it moves so fast.

I really didn’t have a lot of expectations. My goal was already achieved just having finished it. Knowing the person I was before I was before working on it and the person I became after I was already satisfied with the work I had done, but I’m definitely honored that most people like it. 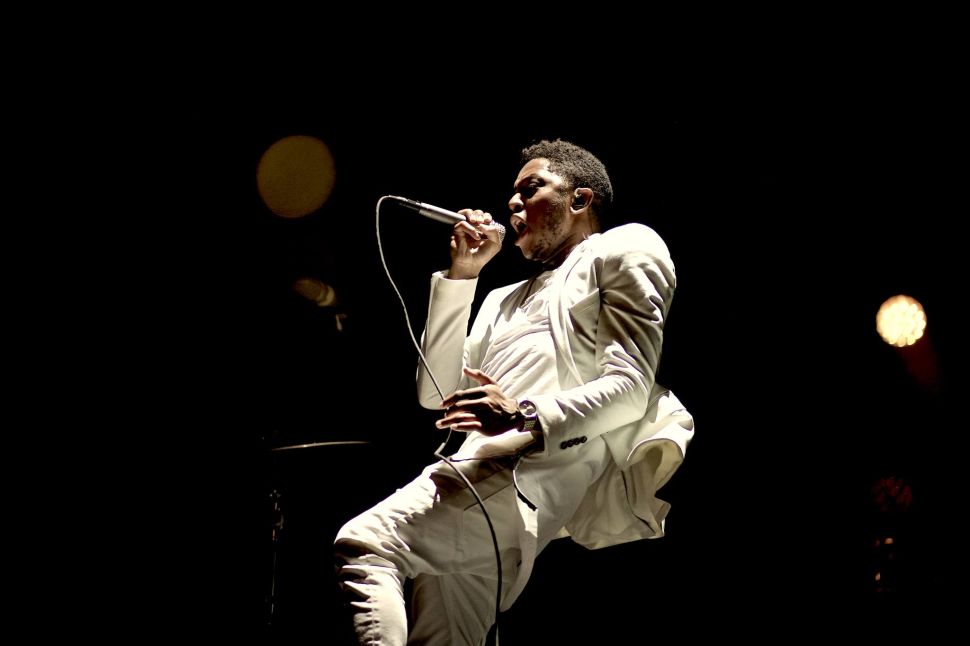