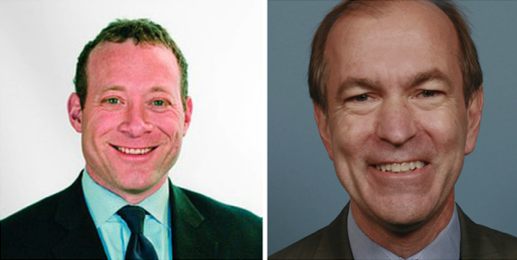 The most volatile congressional race in New Jersey took another turn this week as the Democratic challenger to Republican U.S. Representative Scott Garrett (R-5) went on the offensive, attacking the longtime incumbent’s voting record on national security. Josh Gottheimer is hoping to capitalize on Garrett’s year of bad publicity over alleged anti-gay comments and the potentially unpredictable down-ballot effects of Republican presidential nominee Donald Trump’s candidacy.

Gottheimer, a centrist pro-business Democrat, attacked Garret’s vote against a bill that offers additional security resources to nonprofits such as synagogues and religious schools that face significant risk of terrorist attacks. Garrett’s campaign shot back immediately.

“It is paramount that we protect our religious institutions, synagogues, and public schools, but sadly, Scott Garrett’s voting record is very clear on this,” Gottheimer wrote in a statement. “Garrett has put his Tea Party extremism ahead of keeping our communities safe and secure.”

A representative with Garrett’s campaign said that the congressman voted against that bill because of concerns over precedent and privacy.

“Yes, he voted against HR 5605 – so did 177 other members, including New Jersey Democrats Pallone and Watson Coleman,” she wrote. “That’s because it expanded the USA PATRIOT Act in a way that had serious privacy consequences, didn’t go through the Committee process, and allowed for no amendments. Obviously, that doesn’t make for a catchy press release headline.”

Garrett will likely face a tougher reelection campaign than usual this year in his conservative district, where high turnout and potential depressed turnout from moderate Republicans’ disenchantment with Trump could help Gottheimer cut into his margins. The race has become a top priority for the Democratic Congressional Campaign Committee.

The conservative congressman has also faced repeated attacks from pro-LGBT lawmakers in the state for comments he made about the congressional Republicans’ fundraising arm. After a Politico story detailed Garrett declining to donate to the group because of its support for gay candidates, his donors have faced repeated calls to withdraw their support. Garrett later denies making the comments.

Since the story broke last summer, twelve companies have withdrawn their support for his reelection bid including PSEG, Goldman Sachs, Allstate, Barclays, Chubb and State Farm.

Gottheimer has far outpaced Garrett on fundraising this cycle according to the Federal Election Commission, raising $2,899,64 to Garrett’s $1,347,631. The two both have approximately $2.5 million in cash on hand, but it remains to be seen whether that edge in courting donors reflects a wandering eye among Garrett’s supporters in the voting public.