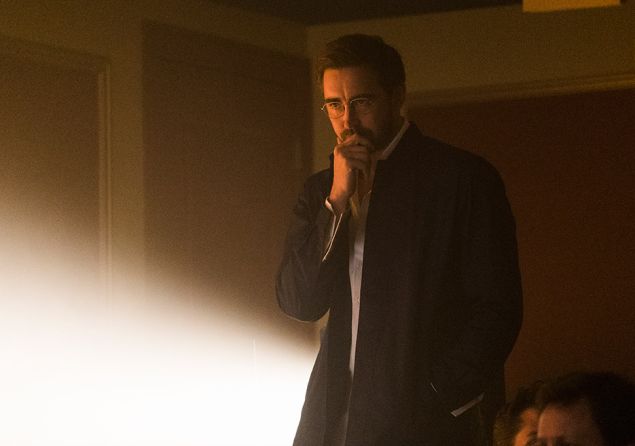 There’s no easy way to summarize the appeal of Halt and Catch Fire — and believe me, I’ve tried. The simplest thing to do is sell it as a sort of feel-good business story with a pleasantly meta twist: A show about up-and-comers working together to try to make better technology products in little-engine-that-could fashion and maybe, just maybe, succeeding, Halt is itself the product of up-and-comers working together to try to make a better TV show in little-engine-that-could fashion and maybe, just maybe, succeeding. Not in terms of ratings or award-show recognition — not yet, anyway. No, Halt’s success is measured by its small but dedicated army of devoted proselytizers, many of them writers and journalists, who saw the show through a rough first season into a spectacular critical turnaround in Season 2 and are now grateful for the mere existence of a Season 3. The unusually close-knit performers and writers, whose method of working on the show is more like an acting company than a traditional TV show cast, is perhaps another indicator.

And it’s the one that hits closest to the bullseye when it comes to what makes Halt and Catch Fire one of the most rewarding watches on television today. Like few other shows I can think of, HaCF’s derives drama from collaborative conflicts — emotional, intellectual, financial, creative — in which it’s not immediately clear which character is in the right and which one’s being an idiot or an asshole. It’s tough to describe how thrilling that is to see when you get paid to watch hundreds and hundreds of hours of television every year. (Nice work if you can get it, don’t get me wrong, but you get my drift, right?) I very vividly remember the show cementing its slow transformation into something worth getting excited about back in Season One with an argument between brash young programmer Cameron Howe and her relatively conservative engineering counterpart Gordon Clark. Faced with the dilemma of a competitor making a lighter, cheaper computer than their own, they had to make a decision: Keep Cameron’s elegant, personalized user interface and eat the higher cost and heavier weight per unit, or remove it, ensuring success in the marketplace and continuing employment for the people making the thing but stripping away everything that made it unique — great, even. “Holy shit,” I thought, “I have no idea what I’d do. They’re both making great points, and there’s no easy answer.” Even the best dramas tend to shoehorn viewer responses into a desired direction; Halt left me out there on my own, and I loved it. Thanks to the fine writing spearheaded by co-creators/co-showrunners Chris Cantwell and Chris C. Rogers and the nuanced acting of the core cast (Lee Pace, Mackenzie Davis, Scoot McNairy, Kerry Bishé, and Toby Huss), I’ve been out there ever since.

“Valley of the Heart’s Delight” and “One Way or Another,” the two episodes comprising this week’s Season Three premiere, are fully of tantalizing uncertainties in this manner. Some of them are just funny, like the argument that erupts between the now San Francisco-based programmers of Cameron’s internet service provider Mutiny, about the pronunciation of “.gif” — hard G or soft G? The character who insists it’s soft is technically correct, according to the inventor of the thing; but the character arguing on behalf of the hard G is correct in saying the soft G sounds freaking ridiculous. “Oh look everyone, it’s Gordon,” he says as an illustration when the older tech wiz walks by, pronouncing it like the river instead of the bald guy from Sesame Street, in a laugh-out-loud funny moment.

Other uncertainties are no laughing matter at all. Cameron and her more business-minded partner Donna, for example, are absolutely right that the next phase of Mutiny’s evolution (it’s already evolved from a gaming company to a sort of early social network) has to be “it” — the next big thing, the development that will make them secure and prosperous in the long run. The idea they come up with, however — a way for users to trade items with one another over the internet, without needing to meet face to face — is self-evidently not “It,” even if neither of them had heard of such a thing before. But how would they know that? They have to go with their gut feelings, and those are far from foolproof. And even if it were, the round of humiliating meetings they’re forced to hold with venture-capital firms — including a sickening scene in which it becomes clear they’re expected to sleep with their investors, the realization appearing on their faces as the camera swirls around their dinner table — hardly make it feel worthwhile anyway.

Only information wheedled out of Diane Gould (Annabeth Gish), the VC-partner mom of one of Donna’s kid’s classmates, gets them back on track by sparking a plan to buy out a rival and secure their dominance in the field — and that information was only procurable because Cameron sneakily bribed Donna’s daughter into inviting Diane’s kid despite hating her guts. Was that the right thing to do? And what about Diane herself? Donna seems to both admire the woman and be perpetually bad-footed by her; in one memorable scene she walks in on her changing in the middle of a girls’ bathroom, yet it’s Donna who’s embarrassed, not Diane. (Joe pulls the same trick, deliberately, when he strips out of his wetsuit in front of a prospective employee in the next episode.) Did I mention Diane’s divorced, which she says is why her kid’s so nasty, and that Donna’s relationship with Gordon is not at its best at all? This is an impressively tangled mess of ideas and emotions to untangle.

Gordon’s dealing with a similar Gordian knot of conflicting needs and desires. He’s getting tired of his status as the fourth banana at Mutiny, below Cameron and Donna and parallel to the far more contented John Bosworth, the older salesman who helps things run smoothly. Boz happily refers to his bosses as “the queens of the jungle…the braintrust,” saying “They run the place, I just work here”; Gordon’s not there yet, and may never be.

However, he’s also not ready to be swept back into the orbit of Joe McMillan, his former partner and friend, who’s now earned fortune and fame as a sort of new-age tech guru based on anti-virus software Gordon designed and over which he’s now suing. (Much is made in a meeting with lawyers about whether the design was a gift or a transaction. “You give a gift to a friend. You have a transaction with a business partner.” “Okay,” Gordon replies skeptically, “did you just make that up, or is that a thing?”) Gordon shows up unexpectedly at the deposition and offers Gordon a majority share of the massively successful company Joe now runs like a beardier Steve Jobs. “Take the goddamn deal!” I found myself screaming at the television, despite the fact that Gordon’s fear of this man’s dishonesty and disloyalty and inability not to fuck people over is 100% justified. If that’s how I felt, how must Gordon have felt?

One final bone of contention between Joe and his former colleagues: Ryan, a gifted but awkward young programmer played by Manish Dayal. His brilliant ideas, or at least the ideas he and others deem brilliant in theory, are too expensive and impractical to implement, according to Donna and Cameron. Gordon sees him as an unappreciated kindred spirit and offers to buddy up with him on their own initiatives within Mutiny. Bosworth sees him as a stuck-up loudmouth, yet another wiz kid who condescends to him because of his age and his accent and his relative lack of technical expertise. Joe sees him as…well, it’s unclear, because we don’t know what Joe sees himself as. He’s established himself as a Silicon Valley wise man, surfing in the mornings, rubbing elbows or other things with Madonna at night, making deals and building the future in between, dispensing zen platitudes throughout. But when he offers to hire Ryan following Gordon’s refusal to reforge their partnership, is he just trying to get to his ex-friend, the man whose work he stole and passed off as his own to the tune of millions of dollars? Does he see in Ryan what he once saw in Gordon and Cameron — a person capable of building something brand new provided the great Joe McMillan unlocks that potential first? Does he see someone who’s just gonna pull his own ass out of the fire, since he has no clue what to do next? (Ryan: “I think I’m what you’re looking for.” Joe: “What makes you think I know what I’m looking for?” Ryan: “Because you’re brilliant — wait. Don’t you?”) There’s no way to settle any of this definitively, because everyone’s right. Ryan’s ideas are brilliant, and they are impractical within Mutiny’s current set-up, and he is a condescending jerk, and he is underappreciated, all at once. Joe believes in Ryan, and he’s also using Ryan, simultaneously.

These are complicated, nuanced sets of ideas, and the performances and filmmaking rise to the task. To focus on just one actor, look at Bishé’s face when Donna reacts to Gordon coming home from work stoned and drunk, this “hey, get a load of this!” glance she shoots Cameron. There’s entertainment, exasperation, love, and mild distaste in that look, all smushed into a ball. (Her funniest moment, though, is when she jokes to one of the VC scumbags about calling him so many times he must be tempted to take out a restraining order, then mouths “I DON’T KNOW!” frantically to Cameron as the joke flops.) And to take just one lovely bit of framing, consider the conversation between Donna and Cameron about what to do with the empty space on their mainframe: Their faces are cut off halfway down by the backs of the computer monitors they’re using, merging them with their machines. It’s impossible to separate the personalities and the technology, the emotions and the economics. Halt and Catch Fire doesn’t insult your intelligence by trying. It leaves the sorting routine in your capable hands. 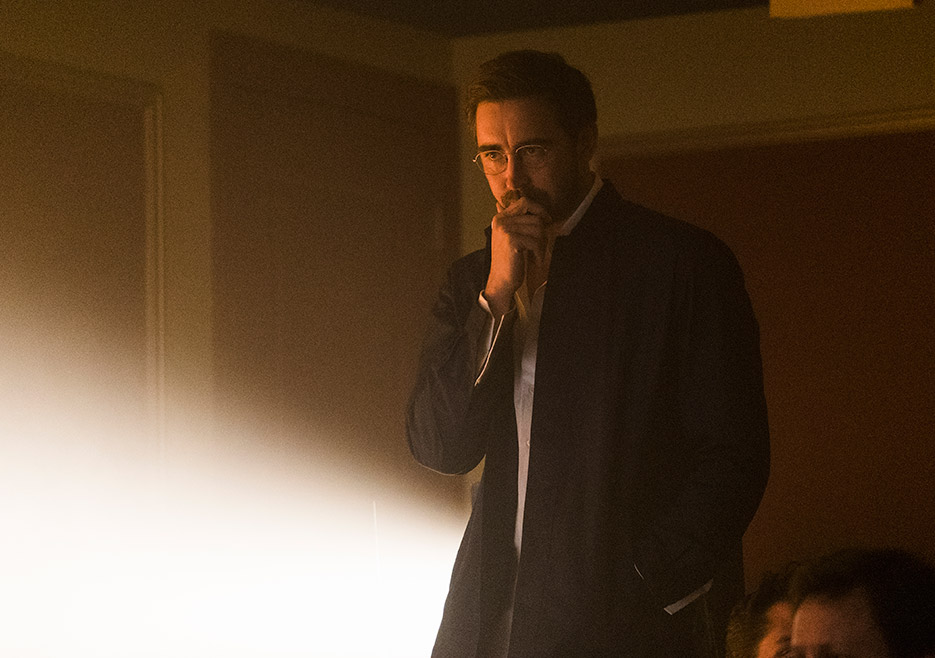