Each quadrennium of my life since age 10 the same thing happens: America discovers gymnastics.

It’s not a bad thing. Gymnastics is beautiful, requiring incredible athleticism as well as grace. Innovation and personal style are rewarded. But every four years, we develop a collective whirlwind obsession with the sport. This Olympiad is no exception. Simone Biles, likely “the greatest gymnast ever,” and now the reigning Olympic all-around champion, is on the cover of Time magazine, and deservedly so. But will we remember her name next year? Can any of her recently minted fans name the world champion before her? Not the last Olympic champ—the last world champ. My guess is no.

And every Olympics it’s the same: two months after the Games are over—six months if you’re a kid with visions of ribbons, metals and crushed velvet athletic wear—we’ve forgotten about a sport that exists all the time.

When I was ten the darling was 4’7’’ Kim Zmeskal. The country was sure that the U.S.’ first ever world all-around champion in gymnastics would become the Olympic champion. Competing with a stress fracture, she did not earn a single individual medal in 1992, and retired shortly after. In her stead there emerged a new American gymnastics sweetheart: Shannon Miller. She took the pixie-ish look then in vogue even further than Zmeskal—she was more svelte, more balletic and she lost the all-around gold in ’92 by a mere 0.12 of a point.

Largely as a result of the ’92 Olympics, I did gymnastics until my body gave out, which wasn’t too long. A lack of courage and talent ended my ambitions after a few years. But I retained a profound interest in the sport. And I’ve watched, and grown frustrated, as each four years, people get excited about virtuosity in sparkly leotards.

This year the world has—rightly, obviously—discovered Biles. Her dominance is breathtaking. She’s a fantastic competitor, combining extreme difficulty and shocking consistency. She deserves every ounce of fame she has and will receive. She’s also a three-time world champion, who has been doing this for years now.

But let’s return to 1992. After the highest American all-around medal (Miller’s silver) in a non-boycotted Olympics, I was hooked on the sport. I scoured television and print periodicals for information on gymnastics, and was enthralled with what lay ahead for Miller and the American team, which was sent into spiral by Bela Karolyi’s (first) retirement.

So I was surprised when, the next year and the year after, when Miller became the first American to win back-to-back world championship all-around titles, no one seemed to notice or care. Why was I now relegated to an 11 am showing on Sunday morning, rather than prime time? Why didn’t anyone talk about this on the news anymore? Miller was all but forgotten.

When the next Olympics came, a new image captured America’s imagination: that of Karolyi carrying an injured Kerri Strug to the podium to accept the gold medal (that she didn’t actually need to vault that second time to secure). By then, Miller served as a sort of ancient sage for the American team, so old (at 19) that she was like a prized horse sent out for a final run before the glue farm. We acknowledged her sacrifice, but we weren’t going to get too excited about it. Miller was the only American woman to win an individual gold medal in those Olympics, but she never achieved Strug’s fame. Similar situations pepper earlier decades in gymnastics. In 1984, the accomplishments of Diane Durham, the first African American national champion in gymnastics, were overshadowed by Mary Lou Retton and her Wheatie’s box (Durham was viciously cheated out of a chance to compete at the 1984 Olympics).

It’s almost as though the collective consciousness only has space for one, and the focus on her is all the more ardent because any dissension from the worship of the one might reveal the depth of knowledge that the majority—commentators NOT excluded—of people who talk about gymnastics during the quadrennial period of popularity actually hold.

But lets again return to the mid-90’s, because they are a time before performance enhancing drugs and corrupt judging had tainted the sport. In 1993 and 1994, Miller had a dramatic run where she was the most dominant gymnast in American history and of the modern era. While, yes, her reign now seems less impressive compared to Biles’ blitzkrieg of titles, it was exciting in the freshly pre-Soviet era that an American grabbed the torch and held so tight so quickly, after nearly 40 years of Eastern Bloc supremacy in the sport. But Miller was never a Zmeskal, a Strug or a Biles.

If history is any indicator, Americans will forget about Biles shortly, despite her brilliance. Unless she makes it to the next Olympics, or a Wheatie’s box. And unless you’re a gymnastics fan, in which case you never will.

Every four years, the nation falls in love with a female gymnast. Even in the off years—like ’96, where it was supposed to be Dominique Moceanu (who did not earn any individual Olympic medals), or 2000, where we had to suffer (joking, obviously) with the immensely talented but born-in-the-wrong-year Amy Chow and the next glue farm entrant, Dominique Dawes—we crown a “darling,” to some degree. I tolerate the sexism (have you seen this shatteringly stupid interview with Biles and Aly Raisman?) and ageism (the New York Times called the team “barely grown teenagers.” Aly Raisman is 22 years old) that’s part of gymnastics coverage. I tolerate it because I like gymnastics and women’s athletics generally don’t get enough coverage. But my question is this: why only every four years? And one darling only? Not to speak of the fact that when the Olympics do come, we shove enough gymnastics—and photos of the chosen darling—down the national gullet that everyone who isn’t a superfan is tired of it by the games’ end. Lastly, when everyone else is suddenly, briefly, transfixed by your sport and opining on it, then abruptly tired of the shiny outfits and tiny women… well, it can be a bit annoying, frankly.

It’s not the only sport with this type of sickness. Swimming and running are also paid most attention in an Olympic year, and soccer is only now becoming something American adults appreciate outside of Brooklyn bars during the World Cup, despite the fact that it’s an all-consuming obsession in much of the world.

Meanwhile, all year, seven days a week, young gymnasts in the U.S. are working out. There’s so many of them that you can probably check out a local meet where you’d be impressed with the gymnastics most weekends out of the year. You don’t even have to be in a city, since gymnastics is one of few sports that knows few regional boundaries in the U.S., with high-level gyms all over Texas, Maryland and Michigan. Plus, there are at least a dozen international competitions showcasing gymnastics every bit as impressive as that at the Olympics every year across the world. In the U.S., NCAA meets are an affordable and entertaining affair.

In Europe, gymnastics—and many other sports—are different. Romanians and Russians before the end of the U.S.S.R. treated gymnastics stars very well—even those who didn’t succeed at the Olympic level, though the Olympics hold a special place in their hearts as well. 1980’s Russian star Dimitri Bilozerchev nearly had his leg amputated after a car accident, until someone realized he was a gymnast (he later won three Olympic golds). And adults and children alike compete in “clubs,” the way they do for soccer, where a regional or city affiliation helps defray costs, bolster fandom and increase community cohesion. Just ask Bela Karolyi, our adopted patron saint of gymnastics (and likely a child abuser), who believed the club system, local support and a national respect for fitness and health were what created what is called “Nadia’s generation”—the lithe band of Romanians in the 1970’s that has influenced every wave of gymnasts since. He outlined the circumstances of Nadia’s emergence in his 1994 book Feel No Fear: The Power, Passion and Politics of a Life in Gymnastics.

At least with Biles, the choice of the darling doesn’t feel at all arbitrary. She was thought to be the best going in, and she won the most medals of any American gymnast in a single Olympics, including the big one—a title that eluded the U.S. women until 2004.

But having one darling every four years isn’t good for gymnasts (because of pressure to be born in a certain year, among others) nor hardcore fans (for whom all of this is frustrating) nor casual fans (who binge and purge on gymnastics for their whole lives). We don’t do this with any of the (almost universally male) sports that dominate the American consciousness year in, year out.

Maybe with our incredible success as a nation, and hers as an athlete, comes a responsibility to better recognize all the athletes at this level. And support them. And the kids who will become them.

Maybe this quadrennium we can take the enthusiasm for gymnastics that Biles has generated, which may be unprecedented in U.S. history, and use it to encourage young people—and even older people—to be involved in the sport at whatever level they can.

As the gymnastics competition draws to a close this Olympics, I want to feel excited for the next three months of higher enrollment in the sport recreationally, but I’m actually sad, because I know that that enthusiasm fades fast. Surely this is also the case with the other sports that only garner cheers, mainstream coverage and celebrity creation every four years.

Here’s to hoping that after this Olympics, gymnastics fans start fantasy leagues, and that next year’s world champions—male and female, Biles or not Biles—get to be household names, too. But I won’t hold my breath. 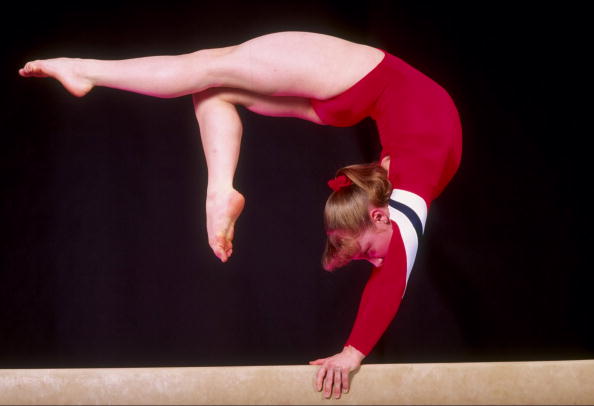