Any dollar bill with Alexander Hamilton’s picture on it will get you a shot at Hamilton, the musical—and all-round phenomenon now (and, maybe, forever) at the Richard Rodgers Theatre. If you’re not in the $849-per-premium-seat price-range, then you might want to check the show’s daily Official Digital Lottery because, if your name is plucked from the hat, $10 could bring you a pair of front-row seats.

An even better deal is going on waaaaay Off-Broadway at The Triad up on West 72nd where Spamilton, a zany bit of revisionist history based on Lin-Manuel Miranda’s megahit, takes up residence September 8. Even before its opening, it has been extended through October 30. Preview turnouts have been so intense it too has, with comparable largesse, instigated a lottery for its $59-a-seat tab: Instead of $10, it’s 10 cents.

“When was the last time you paid a dime for a show—Naughty Marietta?” rightly wonders Gerard Alessandrini, who impishly dreamed up this lottery, as well as the show, and picks the winning ticket himself every night a half hour before showtime.

A peerless parodist, Alessandrini has been tying tin cans to Broadway for 36 years with his annual updates of Forbidden Broadway, creating a Tin Can Alley of his own.

Rex Reed discovered him a block and a half from home at The Triad (then Palsson’s, later Steve McGraw’s) and raved, causing the show to run for 2,332 performances in eight different venues. A star was born. So was a feud. (Reed’s neighbor, Lauren Bacall, didn’t take kindly to the polluted bouquet that Alessandrini flung at her bullhorn baritone in Woman of the Year: “I’m One of the Girls Who Sings Like a Boy.”)

Alessandrini specializes in fastening wickedly witty words to known Broadway melodies. Spamilton is a mash-up of 30 songs—half from Hamilton, half from older shows. Here “Lin-Man-uel” fits on the three notes of Annie’s “N.Y.C.” or Stephen Sondheim’s “Another Hundred People” is twisted into a comment on Miranda’s speed-rhyming: “Another Hundred Syllables Just Came Out of My Mouth.”

It’s a rarified art, and Alessandrini has picked up every theatrical prize possible for it, including the Tony—but excluding the Pulitzer. (Hamilton one-ups him there.)

Just as Hamilton extended the boundaries of Broadway and diversified casting, it also pushed Alessandrini well beyond his usual satiric, skit-and-run scattershooting.

“It’s definitely a spoof, but I think of it as a different kind of a show than Forbidden Broadway,” he contends. “There are no blackouts, and we have never had a Forbidden Broadway where one musical’s characters stay for the whole show.”

Not that he had much of a choice when he surveyed the recent theatrical terrain—Hamilton has cast such an awesome shadow over Broadway for the past two years that it more or less had to dominate the proceedings—but this does give the revue the illusion of structure. Working from a Hamilton homebase, there is the occasional, cursory bow to the competition off in the distance—say, The Lion King and I (“Shall We Roar”) or An American Psycho in Paris (“I Kill My Friends in My Underwear”).

Also, everything’s up to date in Spamilton. Leona Lewis’ highly idiosyncratic phrasing of “Memory” in the current Cats gets roundly ridiculed, and Barbra Streisand shows up appropriately attired in faux American colonial to announce the Tony for Hamilton—but not before declaring “I Want to Be in the Film When It Happens”—while Leslie Odom Jr., the Tony-winning assassin of Hamilton, Aaron Burr, seems sadly resigned to the fact that he won’t be in the film when it happens.

Another way Hamilton has shoved Alessandrini into Broadway’s cultural revolution is the cast—which, for him, is all new (and racially diverse, save for a couple of rotating guest stars), though you’d never know it because all five novices display the same polish and precision of past Forbidden Broadway casts. (This could be Alessandrini’s doing. As a director who can capture a whole persona in quick, finite brushstrokes, he is the Mike Nichols of cabaret. Example: When Chris Anthony Giles makes his entrance, he unmistakably wears Odom’s scowling, downturned mouth.)

“That’s just casting,” Alessandrini says, waving away all compliments. “If I hadn’t found Chris, I might not have written so much Burr. It’s like using what you got. That was always true of Forbidden Broadway. It’s, ‘Oh, this girl’s going to be able to do Patti LuPone,’ so I write a lot of Patti LuPone stuff. And ‘this girl’s going to do Julie Andrews.’ If they can’t, I wouldn’t do it. It’s always tailored to the talents of the cast.”

Yes, LuPone puts in an appearance here, pissed off as usual (“she’s in War Paint”), as does an overly lipsticked Carol Channing to audition for the Hamilton road company. Liza Minnelli arrives as a blitz of red glitz, brassily blatting out “Down With Rap.”

All three divas are executed (and that’s the right word) by Gina Kreiezmar, who shares the white-girl duties with another Forbidden Broadway veteran, Christine Pedi, a co-producer this time out with John Freedson and David Zippel. The show’s single white guy who minces out Jonathan Groff’s mad King George is, right now, Glenn Bassett, the stage manager and prop man (and Alessandrini’s partner).

“Even these diva side-trips that look like Forbidden Broadway are about what happens to them because of Hamilton,” Alessandrini points out. “My comment on the divas is that two years ago they were at the top of their game, but now that Hamilton’s around, they really are something from the past. And I’m exaggerating it by making them Beggar Woman from Sweeney Todd, begging for Hamilton tickets.”

Miranda is played by a wide-eyed Dan Rosales with an almost Minnelli-like need to please, and Nicholas Alexander Rodriguez is a properly wild-haired Daveed Diggs. Nora Schell portrays all three of Hamilton’s principal ladies, and when she is required to do them at the same time, she does them with Avenue Q puppets.

Short and stocky Juwan Crawley may look nothing like his Hamilton counterpart, Christopher Jackson, but he lands the biggest laugh of the evening. When the show gets to Phillipa Soo’s closing moments (“I establish the first private orphanage in New York City…I help to raise hundreds of children. I get to see them growing up”), in comes Crawley dressed in bright red as a large, economy-sized Annie.

Miracle of miracles, Spamilton has turned Alessandrini into a rapper, sorta. Certainly, he’s slavishly faithful to the patter of Miranda’s lyrics. “It wasn’t necessarily out of respect,” he sheepishly concedes. “It was just that I don’t know how to rap. The only way I could do it was to follow him exactly, syllable by syllable. If I knew, I’d say, ‘O.K., this is what I want to say—let’s do it with a rap and a beat.’ ”

The denser the rhyme, the harder the work. “Lin said there was one part of ‘My Shot’ that took him a year to do. It’s like eight lines. I said, ‘I’ll never get this done by the end of the summer,’ so I just put it in as ‘I Had a Dream’ from Gypsy. Some sections were very hard. One that was just 12 lines took me two days of eight hours to do. It was intricate because there were so many lines and the rhymes went over the bar.”

His initial spin of the original cast recording was decidedly off-putting. “When I first put it on, it didn’t please my ear,” he recalls. “Then I read the libretto. It felt like I was reading A Man for All Seasons, some kind of historical narrative. I thought, ‘Oh, this is really very interesting,’ because I love history. It was like reading a modern-day historical play—with commentary. The history is what truly got me interested.

“I really didn’t start to actually like a lot of the music until I started parodying it, and then I had to listen to it. I’m not a fan of rap music, but Lin has got a lot of different styles of music in there. ‘What’d I Miss?’ is like a swing. ‘The Room Where It Happens’—that’s a catchy Jerry Herman tune. He even got in some Mozart stuff.”

The show took Alessandrini about two and a half months to write—and he’s still writing it. Three new numbers have yet to be put in before the show opens. One is a parody of In the Heights called ‘In the Hype,’ and the other two work over Hamilton songs: “Take a Break” with Lin-Manuel and J. Lo, and “What’d I Miss?” about an octogenarian who takes a bathroom break and can’t find the thread of the narrative.

Alessandrini could stop while he’s ahead, but doubtlessly he won’t. Spamilton is already playing like a conspicuous crowd-pleaser. Only last week one contented customer was heard to scream, “I laughed my head off.” It was Lin-Manuel Miranda himself—and just the sort of benediction that Alessandrini needs: Go and sin more. ν 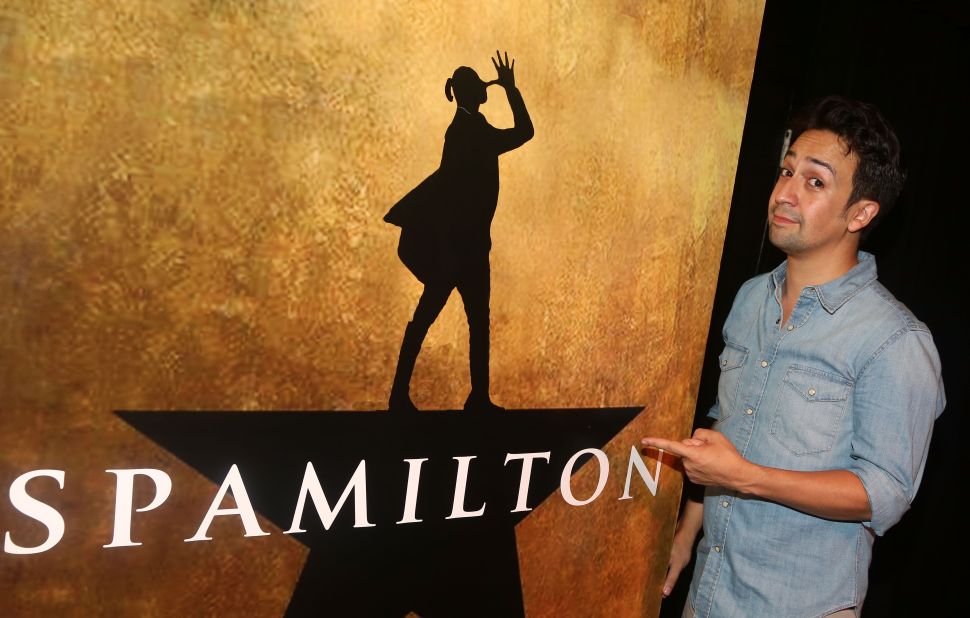