If you have ever aspired to become a sitcom writer, you might be familiar with a book called Elephant Bucks by Sheldon Bull. It’s something between a how-to manual for how to get ahead in a version of an industry that barely exists anymore (remember when we cared about network television?) and a guide for actually writing the all-important spec script that’ll act as your would-be calling card.

Although I’m just a television re-capper, not a television writer, (a distinction Difficult People makes very, very clear) I will say with all of the authority vested in my minimally important position: If you’re trying to break into the television industry in 2016, you’d do better to watch every episode of Difficult People, and take notes.

Every story features the sort of character-based action that television professors salivate over—characters who have a clear goal in mind (“making it” in the industry) but keep getting in their own way (in this case, through a combination of laziness, being a little too comfortable with lies, and various shenanigans).

If you’re a little confused to which show about a self-centered male-and-female comedian pairing I’m referring, that’s a fair concern. My fellow TV reporter and I spent a good five minutes trying to remember whether we’ve actually seen Casual, Catastrophe or You’re The Worst. If you haven’t seen it yet, Difficult People might seem another drop in the bucket of trendy Brooklyn cold brew.

I can try to convince you that Difficult People is different (I’m pretty sure—I still have’t seen Catastrophe), but I’d say, instead, just put it on intending to watch one episode and see for yourself how fast you’ll deplete the Hulu store of available episodes. Julie Klausner created a show that’s like if Seinfeld, Gilmore Girls and Community had a three-way lovechild that went through a rebellious phase and moved to New York to try to make it without the help of its successful parents.

With a joke every 30 seconds and a pop-culture reference every 10, Difficult People creates a cartoonish version of the New York comedy world (Cannibals! Neo-Nazis! Nathan Lane!) that’s still more accurate than anything else I’ve seen at capturing the right alchemy of self-loathing and self-obsession that characterizes those of us who want to make it in the industry. I say “us” because, as “Julie” said (while advising white-collar criminals on the finer art of TV recapping), “A recap is about the person who writes it. An episode of television isn’t the subject: You are.”

I asked Klausner over the phone if there was a scene that stood out to her in terms of being the most fun to shoot. “ ‘Carter,’ ” she said. “I think Billy and I, when we were doing the choreography, looked at each other were like, this is exactly what we want to do.”

If you thought Hamilton parodies were played out, you didn’t see one featuring Gene Simmons, a boy in a peanut costume, and David Bowie rhyming “Carter” with “martyr,” in an episode that jumps effortlessly from scenes of the Real Housewives feuding to references to the Israeli-Palestinian conflict.

Julie Klausner created Difficult People after working with Billy Eichner as head writer and co-executive producer of Billy on the Street, writing the part of “Billy” especially for him. I asked whether there was an aspect to the real Billy Eichner that audiences might not know from either having watched him thrusting dollars at strangers or acting as his Difficult People alter ego.

“Maybe that he has a mushy center,” Klausner said, “like a Rolo.” The same could be true of a show ostensibly about people lacking a work ethic and morals compass—the characters “Julie” and “Billy” are exaggerations but exaggerations so grounded in familiar truths (white lies to avoid awkward situations, procrastinating actual work and blaming the world when we don’t get ahead) that they’re the most relatable characters on screen.

But although Season 2 has brought “Billy” and “Julie” closer to success, “they’re never really going to put in the work,” Klausner says. “They’re always going to blame the world around them.”

In that way, Difficult People is a beautifully constructed, laugh-out-loud funny show that’s also an exercise in self-love for the viewer. Because even if “Julie” and “Billy” might remind you of yourself a little more than you wish they did, they’re still pretty goddam endearing. Just hope that your life might one day feature a fraction as many guest stars.

The last two episodes of Difficult People Season 2 will be available on Hulu on August 30 and September 6. 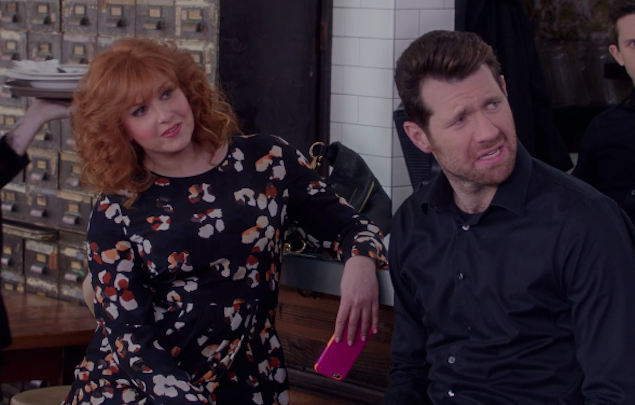