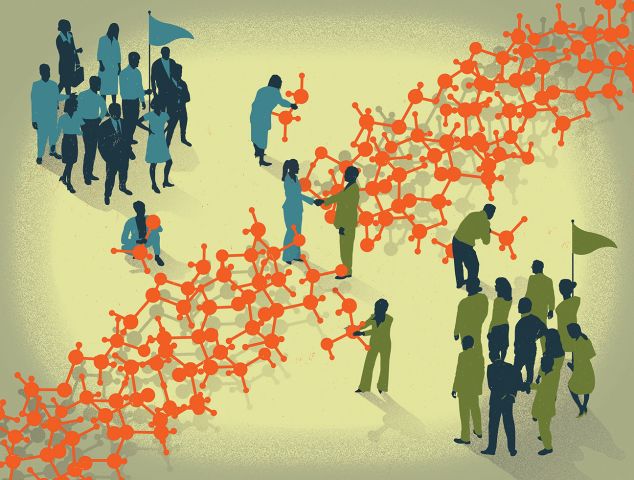 One shooting. Two guys. They are watching it on the news: a clip of a police shooting, played over and over. Gun raised, shots fired, man down. Repeat. The two guys are grandfather and grandson. Now on the screen, a blown-up headshot of the policeman who pulled the trigger: a dark-haired, square-jawed, intense-looking white guy. The grandfather says the policeman looks like a “superhero.” The grandson shakes his head and mutters, “Psychopath.” Two guys. One photo. Two opinions. The grandfather and grandson have been through this before. Endless arguments over the “facts” of other high-profile shootings: Trayvon Martin, Michael Brown, Freddie Gray. The grandfather declares the cop with the gun was doing his job, and the black guy who got shot is a criminal. The grandson? The cop is a racist, and the guy who got shot is an innocent victim. They always choose the same side, the same team. Each has his own sense of Us. And each has his own sense of Them.

Why do we always see the world as Us versus Them when it only leads to cronyism and prejudice and, at its worst, bigotry, war and genocide?

This may sound strange, but it starts with love.

But what is love?

Biologists have some theories. You can read plenty of articles about the neuropeptide oxytocin dubbed with some super-cute nicknames, including “the love molecule” and “the cuddle chemical.” But these simplistic, feel-good labels do a disservice to oxytocin, which along with its partner peptide, vasopressin, serve as the hormonal glue that keeps humans and other animals sticking together in couples, families, packs and even nation states.

It was back in the 1990s when the pioneering biologist C. Sue Carter and other researchers, studying prairie voles, found that when the mouse-like, mostly monogamous rodents touch each other, mate or take care of their pups, oxytocin is released with profound effects on their brains. The same thing was found in other animals, as well as humans, and soon came the cute nicknames. But love, or as biologists call it, social bonding, is a serious business. Without it, animals would die. If an evil genius could block the oxytocin receptors of the world’s animals, there would no social bonding. Result: The packs, herds and flocks of the animal world would collapse. Partners would abandon each other. No one would care for the young. It would be every animal for itself. And the same would be true for us humans.

There is still a lot to learn about the biology of social bonding, but we humans know love when we feel it. “Love,” as Emily Dickinson wrote, “is all there is.” Yes, Emily, when we are in love we feel so intensely attracted and attached to the object of our affections that it seems we are no longer I; we are Us. After orgasm, oxytocin is the glow we feel. Mothers, flooded with oxytocin as they give birth, go gaga over their babies. But there is something else very important about the hormonally bonded family. It’s the economy, stupid.

The “family economy” is a term used to describe the basic economic unit of parents and children. Whether we are prairie voles or humans, in an uncertain world, we band together with those we trust: our kin. As a unit, we look out for one another’s interests. We humans don’t even need blood ties or booty calls to join together with others. We have the capacity to network with total strangers who want the same things we want. That’s why we willingly become members of sororities, sports teams, labor unions, military units, street gangs or corporations.

How strong are these bonds? Well, we Americans even call our first elected leader, George Washington, the father of our country. And why not? He and the rest of the founding fathers pulled the fractious sub-groups of the colonial population together to think of themselves not as weakly connected Thems but as one big economically related republic of Us. Not Southern planters versus Yankee merchants. Not English versus Dutch versus Germans versus French. Not Protestants versus Quakers. But Us, E pluribus unum.

But enough about Us—what about Them? Let’s return to the prairie vole. In one of her experiments, biologist Carter noticed something disturbing. Before mating most prairie voles are pretty mellow, she explained, almost like “hippies in a commune.” But once a male mates with a female, his oxytocin and vasopressin spike, and a bizarre result happens. If a male intruder enters his space, now instead of playing nice with him, the mated vole attacks. The once-mellow vole has been transformed into Stanley Kowalski from A Streetcar Named Desire—a violent, jealous defender of his sexual conquest and economic property. And the female prairie vole? She’s not likely to attack outright. But put an intruder female in with an impregnated vole…and woe is her. The impregnated female will physically block the “other” from any contact with the male, her economic property.

Once the prairie vole has expanded its sense of I to Us—my mate, my kids—any vole who is not an Us becomes a Them. Animals don’t just defend their mates or pups. Like corporations competing over market share or street gangs battling over turf—they protect their territory. The primatologist Jane Goodall was shocked to witness a competition so fierce over territory between two bands of chimps—with beatings, kidnappings and murders—that she felt forced to call it a “war.”

Biologists understand this paradoxical nature of oxytocin; they describe it in terms of the “tend-and-defend molecule.” But this is important to remember: To defend those we consider Us often means we attack those we consider Them.

Back to George Washington, circa 1791. He’s the president. He receives news of another people’s fight for independence, much like the American Revolution and not far from our shores. The leader of this uprising with his diplomatic savvy and strategic genius is favorably compared to Washington himself. These freedom fighters, like the newly liberated Americans who have inspired them, have taken up arms to throw off the shackles of their brutal colonial oppressors. They’ve suffered torture, rape and murder—on a scale so massive it ought to shake any moral man to the core of his being. Surely George Washington and his secretary of state, Thomas Jefferson, will side with their co-revolutionaries? No. Washington and Jefferson send money and weapons to the colonial rulers to smash the uprising. This may explain why: The revolutionaries were not white Europeans. They were enslaved-black Africans rising up against French planters on Haiti (then named Saint Domingue). It was a question of Us and Them. American merchants made a bundle on trade to the island, the richest colony in the Caribbean. Why risk losing that? And then there was this: Southern planters were terrified that a slave revolt not far offshore would inflame American slaves with the radical idea to throw off their shackles.

Fear plays a big part in the biology of Us and Them. When we are around people we are comfortable with, we feel protected and protective. And when we are around people that make us feel unsafe, that fear makes us feel we have to defend against them, possibly even attack them. Before we know it, we are haters. George Washington and Thomas Jefferson were enlightened thinkers who believed in the rights of man and believed that slavery should one day be abolished. But they were also part of the white, slave-owning planter class, economically dependent on their human property. Neither leader had the guts to stand up put his reputation on the line and publicly declare, “Slavery is wrong.”

Who do you consider Us and who do you consider Them? It depends on what you were taught, who your people are, what your friends believe, your economic situation, your politics, your religion and your life experience. The grandfather and his grandson watch the same video clip of a tragic death. Although they are united by blood, the grandfather sees a low-life criminal who provokes an upstanding policeman to act in self-defense. The grandson sees a racist cop gunning down an innocent victim. Us versus Them. The “facts” don’t matter. The feelings do.

Are we doomed to mimic the grandfather and grandson? Set against each other by our biology of Us and Them, swept away on an irrational tidal wave of love and hate? Democrats against Republicans. Sunnis allied against Shia. Black Lives Matter marchers going head to head with Blue Lives Matter protesters.

Here’s a hopeful coda: Dallas Police Chief David Brown is a cop, and cops—who depend on one another for survival—develop a deep bond of loyalty, a fierce sense of Us. In the wake of the assassination of four of his officers during a Black Lives Matter protest, it’s not hard to imagine that Chief Brown’s fear and anger could have provoked him to lash out. Pick a Them any Them to rage against. Instead, Chief Brown did an extraordinary thing. He tried to change the psychology of Us and Them. Reaching out to the very people who felt left out, victimized and mistreated by the cops, he appealed to them, “We’re hiring. Get off that protest line and put an application in. We’ll put you in your neighborhood and help you resolve some of those problems.” (Although the department has not released the demographics of who responded to Chief Brown’s appeal, in the month that has followed more than 500 people applied to become Dallas cops.)

Chief Brown used what Sue Carter believes is the only weapon we have to escape the Us and Them cycle: insight, the ability, even in the heat of the moment, to step back and look honestly with self-awareness at our biases.

We should question ourselves the next time we feel the overwhelming desire to defend Us or attack Them. Are the people we love and are allied with always as righteous as we feel they are? Are the people we fear and even hate always as wrong as we feel they are? We should all ask ourselves, Who do we want to be? A nation of Us and Them, acting like murderous chimpanzee tribes? Or a nation that survives and thrives because even though we have family fights in the end, we are able to see that most of our people are more Us than Them. 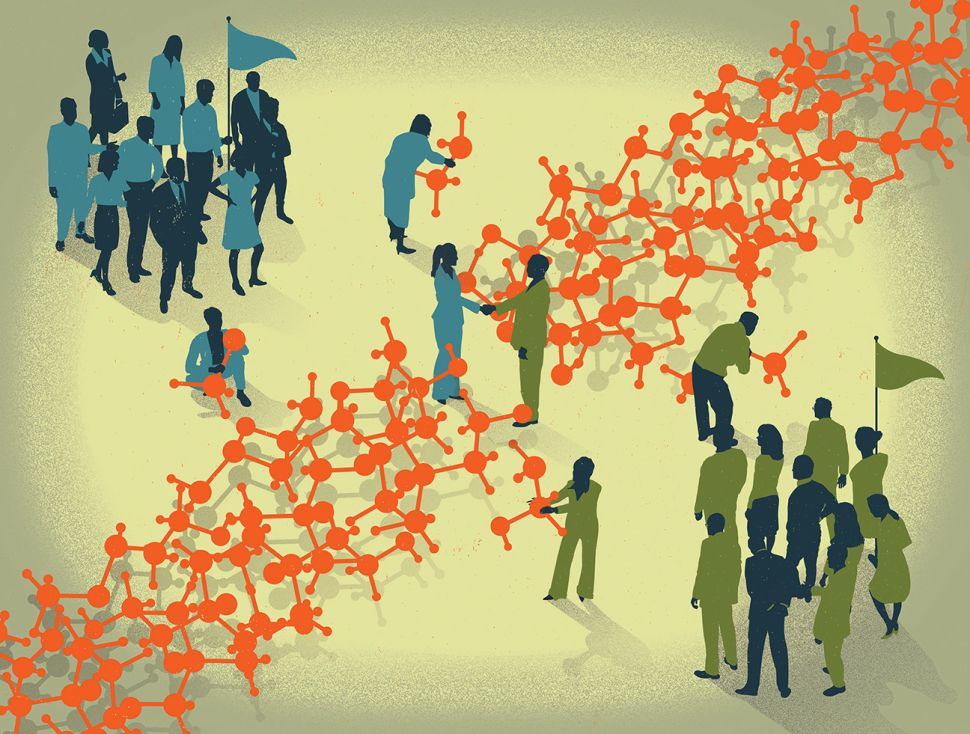