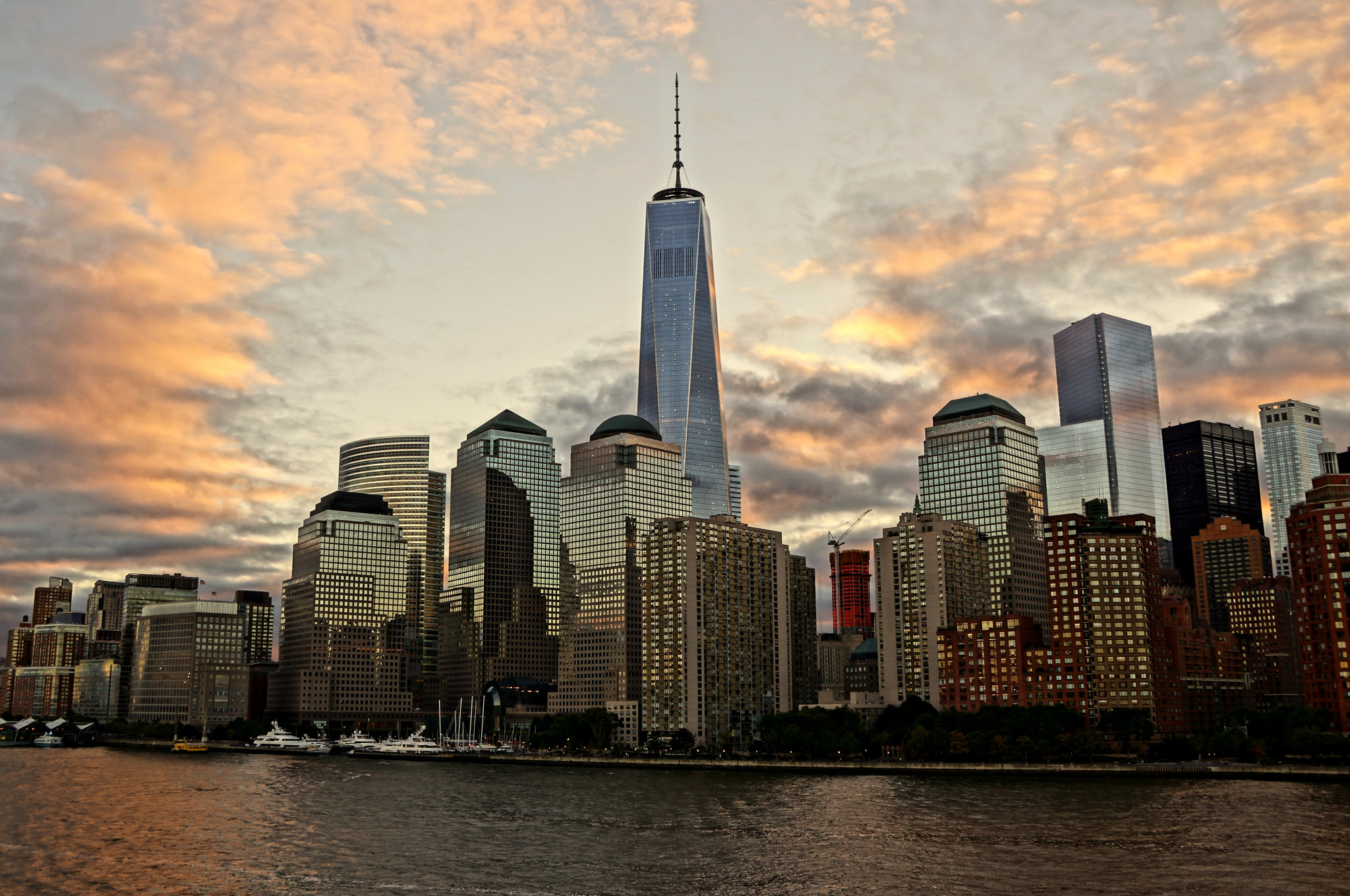 From the beginning, rebuilding ground zero was fraught with strategic consequence, for the city of New York and for the nation.

The original World Trade Center complex, completed in 1973, represented the culmination of a decades-long effort to revitalize the city’s founding center of business. Forty years later, rebuilding those 16 acres reprised history – with new meaning, in a new century, in a new geopolitical context brought forth by 9/11.

The destruction of the massive complex created a rare opportunity for New York City to rethink its long-term economic needs in the downtown area, while sending a message to the world that regardless of whatever al-Qaida terrorists aimed to do, New York City would come back stronger than ever. It was an unparalleled opportunity in the city’s history that otherwise would not have happened.

This opportunity carried with it an unquestionable priority: everlasting remembrance of those who died on that fateful day. September 11 transformed the human meaning of the World Trade Center site. What had been secular was now sacred, a graveyard for nearly 3,000 souls. Those 16 acres, achingly defined by past images of the iconic twin towers anchoring the skyline of lower Manhattan, were now unbearably painful ruins transformed into repositories of memory.

That led to many tough questions: How would the need to commemorate the loss of thousands of lives be accommodated with the need to rebuild an economic future for lower Manhattan? How would the rhetoric of defiance and resilience translate into concrete plans, architectural reality, political decisions, building priorities and economic costs? And who had the power to execute the ideals and ambitions of rebuilding when property rights were split and political power fragmented?

Those are among the many questions I sought to answer in my book “Power at Ground Zero: Politics, Money and the Remaking of Lower Manhattan” by unraveling the political and economic dynamics behind the controversies and conflicts that shaped the process of rebuilding, including billions in public aid to ensure visible construction progress by the 10-year anniversary.

Five years later, though it’s not yet fully complete, the palpable energy on the site belies the conventional wisdom that delay has been destructive. 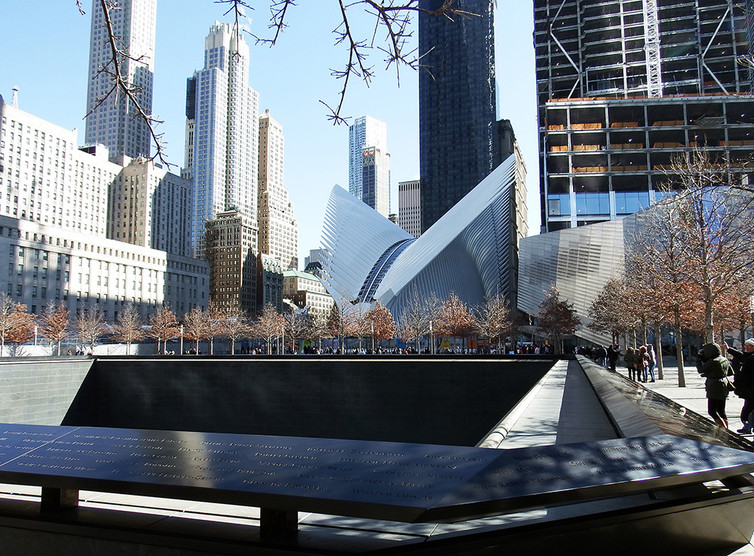 Remembering the victims was an unquestionable priority in the rebuilding of ground zero. (Photo: Gary Hack, Author provided)

I started this research after completing “Times Square Roulette: Remaking the City Icon.” The successful redevelopment of naughty bawdy West 42nd Street became testimony to the city’s ability to once again think big and execute on an ambitious scale.

Rebuilding the World Trade Center site, however, differed from the Times Square project in two salient ways that complicated the task: The cast of players was much larger, especially on the intergovernmental front, and the emotional overlay of 9/11 created an unprecedented planning condition. If Times Square served as the symbolic soul of the city, the World Trade Center served as the symbolic pulse of its economy – despite the fact that much of downtown’s financial establishment had moved to midtown Manhattan.

As in Times Square, the importance of symbolic politics loomed large at ground zero. And for 15 years, rebuilding ground zero has been the world’s most visible redevelopment project.

To understand the multiple forces underlying the decision-making, I spent 12 years sourcing hundreds of primary documents, reading through thousands of articles and consulting scores of public testimonies, economic reports, design statements, meeting minutes and other documents. This research is also based on more than 150 interviews with nearly all the players and many others whose involvement or expertise was relevant to unraveling a story in which complexity prevailed at every level: design, emotion, security, governance, control.

While modern city building is often dismissed as cold-hearted and detached from meaning, the opposite was true at ground zero, where every action was infused with symbolic significance and debated with emotional intensity. 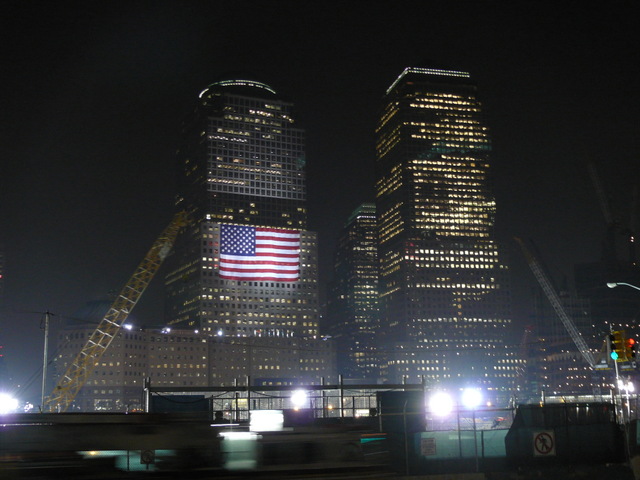 Ground Zero on the 6th Anniversary of 9/11. (Photo: monikaszyma/Flickr)

The twin mandate: To rebuild and remember

The cleanup effort removing 1.5 million tons of debris out of the 70-foot-deep hole of the World Trade Center site was unexpectedly rapid. Its completion in May 2002 marked a profound turning point: It signaled the start of renewal at ground zero – a dual effort to rebuild and remember.

A month later, then-Governor George Pataki made a surprise announcement, declaring: “We will never build where the towers stood.” From that point forward, the “footprints” became sacred ground, inviolable. A permanent memorial would have to “make visible the footprints” of the original towers, which meant that commercial redevelopment of the World Trade Center replacing 10 million square feet of office space would have to ”coexist harmoniously with the memorial itself.”

Whatever was built on the site had to be architecturally ambitious. Simply replacing what was lost or replicating past approaches to city building would constitute a pallid response to human loss and physical destruction of such magnitude. The rebuilding response demanded a big, inspiring, physical presence that embodied the symbolic aspirations of American values.

If these twin mandates – to remember and rebuild – were clear in the minds of public officials, how to achieve them was not. They were competing claims. The terrorist attack created a compelling public interest that trumped prevailing property rights.

Repeatedly, the legal prerogatives of the Port Authority of New York and New Jersey, as landowner, and Larry Silverstein and his investment partnership, as owners of a 99-year lease on the World Trade Center site executed just six weeks before 9/11, were challenged by the politics of accommodating the twin mandates. Ultimately, the property rights of both stakeholders were amended. The Port Authority and Silverstein relinquished development rights on the 4.7-acre memorial quadrant, and responsibility for the development of the commercial office space was realigned. The Port Authority took on development of the iconic One World Trade Center (aka Freedom Tower) and a second tower while Silverstein took responsibility for three additional office towers.

But the process was terribly messy, terribly tangled and, at times, terribly chaotic. 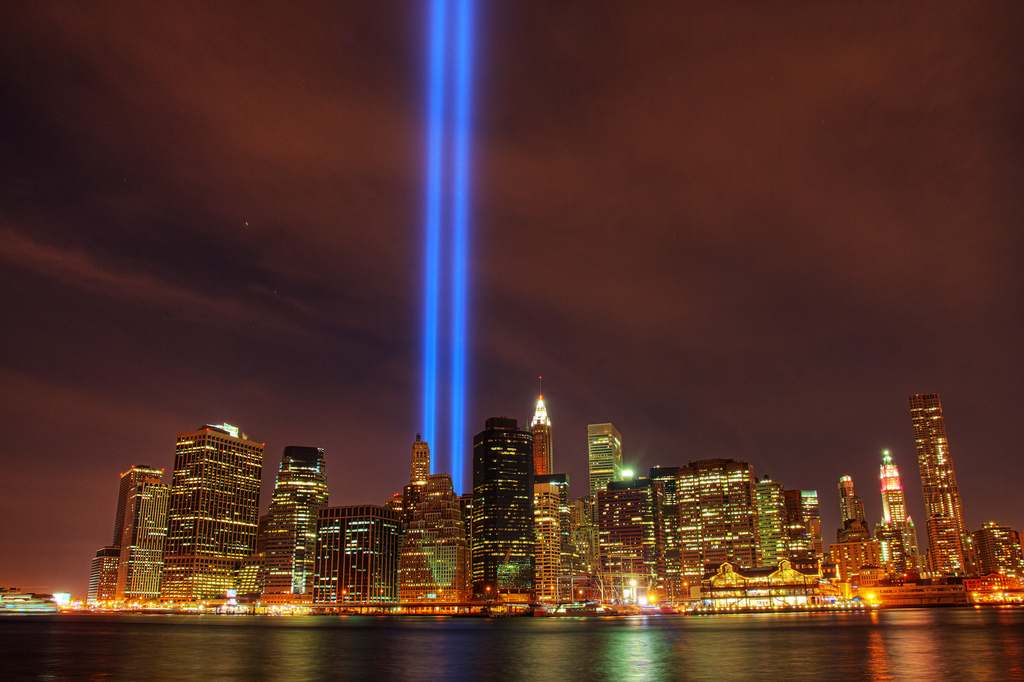 The Tribute in Light is illuminated on the skyline of lower Manhattan. (Photo: Dennis Leung/Flickr)

Many voices: ‘Who’s in control?’

The decision-making arena was packed with many contending voices: elected officials, government decision-makers, private real estate interests, the families of 9/11 victims, civic leaders, preservationists and the editorial boards of the city’s daily newspapers. There was no powerful rebuilding czar, a modern-day Robert Moses, who could overcome the conflicting imperatives and incessant pressures to “get things done.”

The idea of a master builder was out of fashion. But also there was no overriding governance structure to set priorities among competing building ambitions, clarify the inevitable trade-offs and resolve the inevitable disputes. And that repeatedly gave rise to the question, “Who’s in control?”

The ambiguity of the control issue not only created constant confusion; it weakened the public sector’s position when it came to negotiating the terms of rebuilding with the private leaseholder. When government entities are not united, developers are able to exploit the fissures among government agencies to their advantage.

Rebuilding advanced in fits and starts. Public contention, even conflict, had a way of clarifying what would be politically acceptable, and “delay” gave planners and elected officials time to correct plans, reverse decisions and build coalitions of support.

By 2006, the big conflicts over what to build were settled, thanks in part to the eventual acquiescence of those involved, making continuous accommodations and adjustments throughout. By 2008, then-Mayor Michael Bloomberg’s personal leadership assured the opening of the memorial on the 10th anniversary of 9/11, and by mid-2010, the government entities and Silverstein had found a solution to the money question that had bedeviled progress on the commercial office towers.

Contrary to the narrative of delay that prevailed throughout the many years of controversy, rebuilding the emotionally charged terrain was relatively fast-paced compared with the typical two-decade timeline for big development projects to reach fruition. 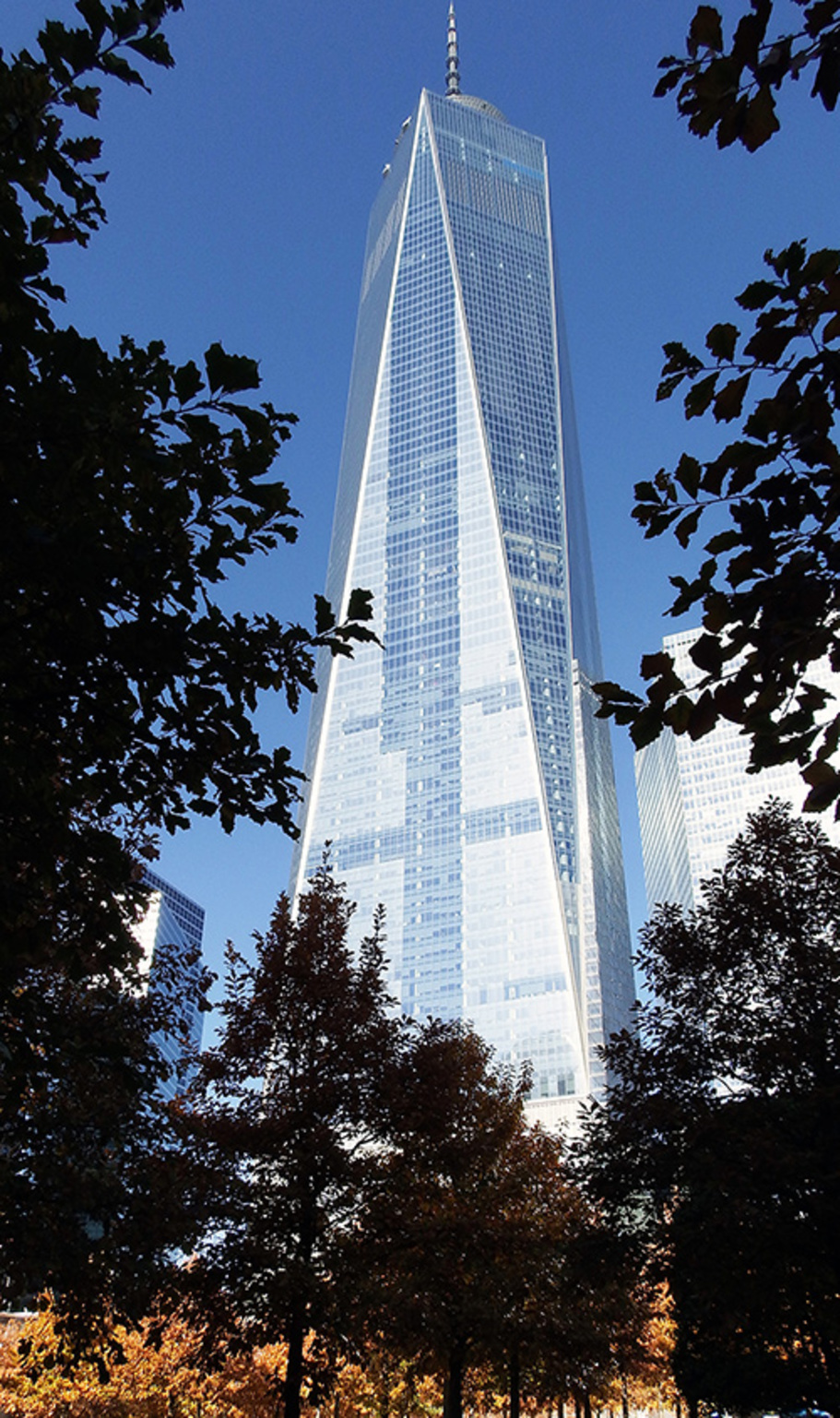 Money, a lot of money – US$25.5 billion, by my estimate – made a big difference in the timetable of achievement at ground zero. Billions from the federal government for recovery and rebuilding. Billions from the Port Authority for a grand transportation hub and an architectural icon for Lower Manhattan. Billions in subsidies for the timely development of private commercial office towers.

While there was a time when observers wondered whether anyone would set up shop above the ruins of a terrorist attack, One World Trade Center stands tall at 1,776 feet, anchored by media giant Condé Nast. The other towers are gaining tenants and the 100 retail shops at the complex have been opening, including a two-story Apple store. Nearly two million people have visited the Memorial Museum since it opened in May 2014.

After 15 years, this monumental effort – fraught by ambitions, power struggles, public dismay and constant criticism – stands as a much valued achievement, a statement of political will and public purpose. Many of the revelations here and others in my book are not part of the conventional wisdom about rebuilding.

Lower Manhattan is stronger today than ever before, the result of a constellation of social and economic trends that would not have materialized without the energy and dedication of many and the billions in public funds that made the new World Trade Center a reality.

Lynne B. Sagalyn is the Earle W. Kazis and Benjamin Schore Professor Emerita of Real Estate at Columbia Business School at Columbia University. This article was originally published on The Conversation. Read the original article. 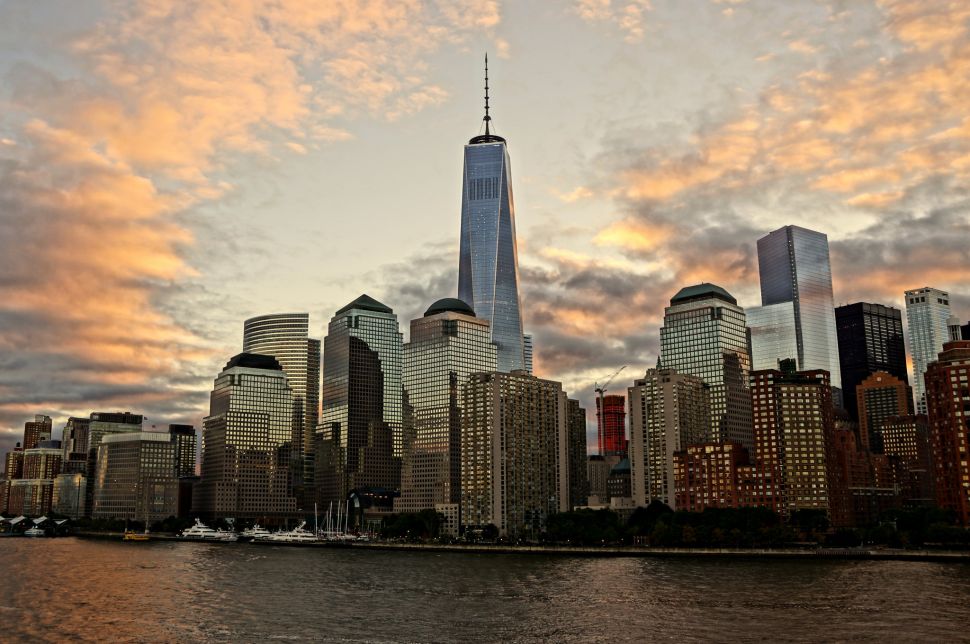