This is a sadly relevant time to get a crash course in the various shades of modern white supremacy.

Fortunately, Imperium, a more entertaining than it ought to be actioner starring everyone’s favorite Gryffindor as a data crunching FBI man who goes undercover as a Nazi skinhead, provides a kind of live action Audubon Society Field Guide for this sort of creep. With the help of this handy-dandy inspired by a true story thriller, you too will be able spot and identify the various species of these violent, racist jerk wads, should you have the misfortune to encounter any in the field.

For starters, there are the aforementioned skinheads, the beer drinking, interracial couple bashing foot soldiers always bringing bullied new recruits into the fold. They are in regular conflict with our next group, the soft-spoken and sober Aryans, oft-bearded and well-organized folk who find justification for their hatred in the Bible and try to recruit our hero into their faction with such come-ons as, “You seem a little mature for a skinhead.”

The scariest subtype may be the seemingly benign PTA types typified by Sam Trammell’s Gerry, a guy who hosts barbecues for friendly neighborhood racists and builds fortified tree houses for his moppets, the better to protect them from “mud races.” There is even a bloviating podcaster, played by this summer’s fave indie film villain Tracy Letts (he of Weiner Dog and Indignation) who stirs the race war pot for fun and profit like a moderately more radicalized Sean Hannity.

As presented in Imperium, their concerns are terrifyingly banal. Did you get the proper permit so those camp kids can celebrate Hitler’s birthday? Have you had a chance to look at the business plan to expand my racist radio show into the Florida market? The film is similarly down to earth. In lieu of dramatic shootouts or tearful redemptions, the climax takes place in a Northern Virginia garage and involves the clever use of laundry detergent. It all serves to underline the film’s effective central premise that these entities are not some faceless other but an everyday reality hiding right under our noses, kind of like the führer’s mustache.

Daniel Radcliffe’s post-Hogwarts career has been very American Ninja Warrior. Whether going au naturel on Broadway in Equus, playing Allen Ginsberg or donning horns, he only seems to be satisfied when pushing the limits of his comfort and abilities. With him shaving his head and sporting a green bomber jacket while trying to explain to the racist group he has infiltrated that just because he’s wearing Levis doesn’t mean he supports the ZOG, it’s no different here. Radcliffe’s career approach has always come off as admirable and occasionally entertaining. Here, is quite touching. You can see the conflict in what he is attempting to do without him overplaying it.

Still there are moments where Imperium is plenty cheesy. Most of them come courtesy of Toni Collette as Radcliffe’s FBI handler; she chews gum in every scene–presumably because the scenery did not provide enough sustenance. Add Nestor Carbonell’s pissed off naysayer of a supervisor, and the inside the bureau scenes seem almost like parody. But they do not detract that much from a movie that takes its job of shining a spotlight on this dark segment of American society as seriously as its star takes his job as an actor. 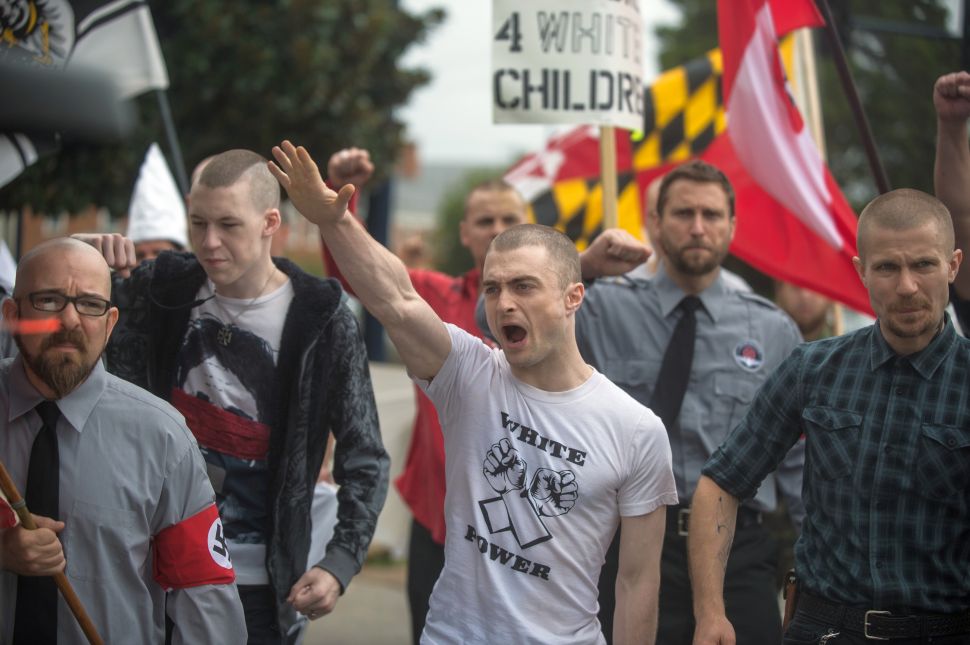