I’m impatient and impulsive, and so I’m pro-spoiler by default: I choosing just to lean in to my perpetual habit of flipping to the end of books to find out who survives and reading the Wikipedia summary of any horror movies I might want to see.

And so, even though J.K. Rowling chastised audiences to “keep the secrets” of Harry Potter and the Cursed Child when it opened in previews in London earlier this summer, when the inevitable occurred and someone posted a detailed plot summary, I didn’t think twice before I clicked.

And I hated it.

Albus Severus becoming a Slytherin seemed such a lazy conflict—already done and dealt with in the epilogue from Deathly Hallows. And then the plot itself seemed almost comically dense, with a twist at the end that, in summary form, read as something one might expect in the worst possible fan-fiction.

Cursed Child is fan fiction, in the sense that the text wasn’t written by J.K. Rowling. While Rowling did co-write the story, the actual play was written by Jack Thorne. And while it’s easy to roll your eyes at how the name J.K. Rowling is so much bigger on the cover of the printed play (or at the decision to print the play at all) after reading the show—as an unlucky statesider, I’ve yet to see it­—I admit my preconceived snobbery had no basis. The Cursed Child earns a place among the first seven books of the series; in fact, it represents what’s best about Harry Potter.

The strength of the Harry Potter series was never solely on its writing. Go back and read the first three books—they read almost juvenile, a sing-songy narration of what, in its skeletal form, is a stereotypical story : neglected orphan finds out there’s another world in which he discovers his destiny. J.K. Rowling’s true genius lay in her ability to craft a world nothing short of miraculous in its nuance and unique culture. The Wizarding World itself is her best creation—an amalgam of old mythology that feels entirely new. From that point of view, Cursed Child is as much fan-fiction as any episode of television—it might be written by someone else, but if the original showrunner is still on board, it’s most definitely cannon.

If the twist at the end of the story seemed cringe inducing, let me present to you the summary of the first few Harry Potter books:

Sorcerer’s Stone: TWIST: Harry discovers the Defense Against the Dark Arts teacher has been secretly harboring Voldemort on the back of his head the whole time, and they’re trying to steal the Philosopher’s Stone that Dumbledore kept inside the school behind a series of protective obstacles.

Chamber of Secrets: A diary from the teenage Voldemort possesses Harry’s best friend’s sister, using her life force to turn himself back into a man. TWIST: The series of paralyzed students in bizarrely specific scenarios turns out to have been due to a basilisk. Harry is bitten, but fortunately the phoenix we learned existed this book has healing tears.

Prisoner of Azkaban: The escaped convict who was said to have helped murder Harry’s parents has actually the good guy all along. He and Harry’s dad were also best friends with the new Defense Agfainst the Dark Arts teacher who, TWIST, is actually a werewolf. In another twist, the real villain was Ron’s pet rat. Harry and Hermione save the day by traveling back in time.

Goblet of Fire: TWIST: turns out a character we just met this book had been impersonating another character we just met this book, forcing Harry through an elaborate series of tasks to get him to touch a trophy, which had been transformed into a portkey (something we just learned existed) because that seemed like the easiest way to get Harry to a graveyard out of the way somewhere to take some blood.

Those who complain that some lines in Cursed Child are cheesy or overly expository need to revisit the earliest books of the series: Quirrell monologues for fifteen minutes explaining his entire plan and everything Harry misinterpreted (I have to leave the room every time before, “Snape, unfortunately, wasn’t fooled,” because it makes me so uncomfortable).

And a seemingly-arbitrary twist is very much within the very DNA of Harry Potter. It’s just been so long that we experienced them that they’ve stopped feeling like twists. It’s also worth noting that all four books contain a twist of someone who we thought trustworthy revealed to have been villainous all along: Quirrell, the Tom Riddle memory, Scabbers, “Mad-Eye Moody.” If some aspects felt silly or overly contrived, sure. That’s Harry Potter. Is the revelation that the Trolly Lady is some immortal grenade-shooting monster any weirder than a tub full of brains that tried to strangle Ron? There’s always something they don’t put in the movie.

As the books went on in the series, both the tone and the story’s conflict matured. In Sorcerer’s Stone, Harry is an eleven year old—in America, barely out of elementary school. The writing is meant for a younger audience, and the plot—a straightforward set of problem-solving tasks for a final confrontation—fits an easily understood model. As Harry, and his audience, grew older, the prose elevated and the story tackled more complicated issues of moral ambiguity, corruption of those in power, and sacrifice.

Ron’s snark, Hermione’s prickly sass, Ginny’s sarcasm, Harry’s—well—bullheadedness all came through so clearly from the lines of the play. I hadn’t even realized how much I missed it all in the movies.

In that regard, Cursed Child is a masterful blending of maturity. Harry is now an adult man; his story arc reflects a more mature, internal challenge—accepting a child, learning to move on from the past, balancing expectations and unconditional love. But the story is really about Albus Severus, who goes from a first year to a fourth year, and so his plotline reflects the earilier books in the series: a madcap adventures of time travel gone right and gone wrong, and, in classic Harry Potter-style, being tricked by someone who was villainous all along

But Cursed Child does more than just reflect the maturity of its characters: it reflects the maturity of its audience. For the vast majority of the book series, the action is prompted externally—the threat of Voldemort. Cursed Child forces the audience to wrestle with characters acting irrationally and immaturely. The impetus of the plot, bringing back Cedric, isn’t a necessary thing prompted by a threat: it’s a task Albus assigns himself because he feels useless and impotent. And the plot itself has a symbolic significance the books largely eschewed in favor of exposition and new magical technology. The Cursed Child is both literally and metaphorically examines the trouble with living in the past, how it alienates those around you forces you to play a version of yourself that maybe never existed.

Perhaps most importantly though, in deciding whether the printed play is successful, is how much I enjoyed reading it. Ron’s snark, Hermione’s prickly sass, Ginny’s sarcasm, Harry’s—well—bullheadedness all came through so clearly from the lines of the play. I hadn’t even realized how much I missed it all in the movies. Whether it was the strength of the story or just nostalgia I can’t say, but I found myself getting goosebumps at multiple points, even after reading full spoilers online beforehand. When Snape re-appeared, it was all I could do not to tear up on the uptown 3 subway. The anxieties I had at the end of the series, of Dumbledore’s subterfuge and Harry’s choice to name his child after Snape, had melted away. The play complimented both the best, and the worst, of the Harry Potter series.

But what felt so right about Cursed Child is that it’s a story about friendship, and the power of that friendship to transcend evil wizards and silly plot points. Whether it’s a boy with no parents who lived under the stairs or a boy surrounded by family who don’t understand him, there will always be someone on the Hogwarts Express who can make you feel home. Just like there are certain books—and plays—that feel like home to me, too. 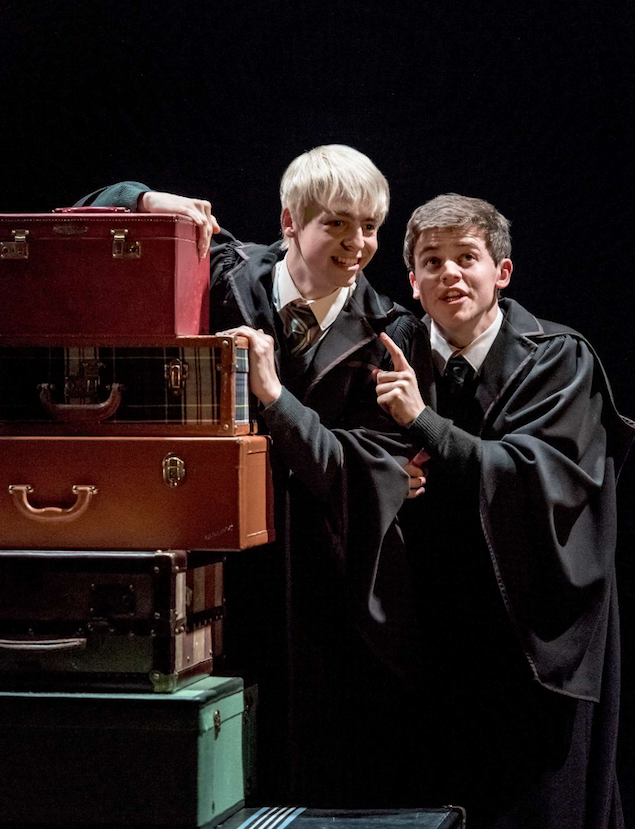