A New Jersey woman, born and raised in Clifton, educated at Rutgers University and currently a professor of political science at LIU Brooklyn, Dr. Dalia Fahmy of North Brunswick denounced Donald Trump’s attacks on a Muslim couple as ignorant, intolerant and un-American.

Accompanied by his wife Ghazala, Khizr Khan told a crowd at last Thursday night’s Democratic National Convention that the couple’s son was an Army Captain killed by a terrorist, and offered his copy of the U.S. Constitution to Trump, who earlier this year called for a ban of all Muslims to this country. In a subsequent interview, Trump wondered why Ghazala Khan stood by her husband and refused to say anything, a comment that drew widespread derision, much of it from Trump’s fellow Republicans.

In response to that Trump interview, Fahmy, the daughter of parents who immigrated to the United States from Egypt, tweeted, “As a politics professor, I lecture to many silent men because I’m the expert in the room.” She also joined a national group called #CanYouHearUsNow, a campaign organized by Muslim women designed to challenge Trump’s disparaging comments about the Gold Star mother.

“I think what Trump was trying to do with a couple who sacrificed their son, was trying to other who they are,” said Fahmy, a student of Immanuel Kant and the author of two forthcoming books on democratization, who said she never saw any discrimination against women growing up in her faith tradition. “The idea is that the woman was not silent because she was grieving but because of her religion. She’s not the mother of an American serviceman who was killed. She is other. It’s pretty telling that this is what Trump decided to hang his hat on, was characterizing her as other and not American. He is trying to appeal to people who don’t see them as an American family.” Fahmy said Trump has not simply singled out Muslims, but every minority group – and women, to run a presidential campaign completely counter to the principles of American tolerance written into the U.S. Constitution.

“If you look at the progression of the narrative, first it was a campaign against women, referring to women and their physical attributes; objectifying women. He said something to the effect that ‘I yell it out and one of the girls says it.’ There is this level of misogyny. Then he talked about building a wall can characterizing undocumented workers as murderers and rapists. And then the comment about banning Muslims. The campaign is divisive by nature. Clearly he’s appealing to that one base, that base of uneducated white males, who have the highest suicide rate in the country, who want to reclaim their country as exclusionary. It’s not about Muslims per se. This is a campaign where we have seen every appeal made to white supremacy, neo Nazis and the KKK.”

Fahmy noted the earliest debates in this country on the subject of religious tolerance, including the specific Federalist anti-Federalist discussions among the founders, and their final unanimous agreement to enable someone of any religious background – not just Protestant – to occupy the presidency. “This level of discourse with Trump is something that we’ve never never achieved,” said the political science professor. “We never saw Bob Dole or Ronald Reagan campaign on division. Reagan campaigned on unity. What were the fireside chats about with FDR? They were about unity and plurality height. And now here we are at the height of globalization and we are seeing a decline in acceptance and tolerance and a definition of American that is exclusionary and fundamentally antithetical to America.”

The New Jersey native was among those television viewers last week when the Khans took to the stage. On one level, Khazir Khan’s words elected American feelings. But on another level, Fahmy said she felt a certain sadness over the fact that Trump’s hatred warranted such a response.

“I was proud of the highlighting of a Muslim soldier, but at the same time, I thought, ‘wow we really need to do this to prove patriotism?’ What if he didn’t serve? While I’m extremely proud and I was emotional watching it, and the father was extremely proud, not just to have read the Constitution but to have it with him, what if they didn’t sacrifice the way they did? There is a sense that you will never be American enough.”

The only woman in the LIU Political Science Department, Fahmy is optimistic for the future of America. She sees a generational divide in this election. She sees college campuses around the country ignited with progressive ideas.

“Young people will be the great equalizer,” she said.

“When I think of Muslim women, I think of all the beautiful women who are working hard everyday to spread good and change the world for better,” said Fatima Salman, executive director of the Muslim Student Association National and ISNA Central Zone rep. “This campaign is designed to show Donald Trump and the rest of America this reality.”

Rabiah Ahmed, media and public affairs director at the Muslim Public Affairs Council (MPAC), added, “Donald Trump needs to move his understanding of Islam and Muslims beyond the stereotypes. Our campaign is one way for us to showcase who we are and what we stand for.” 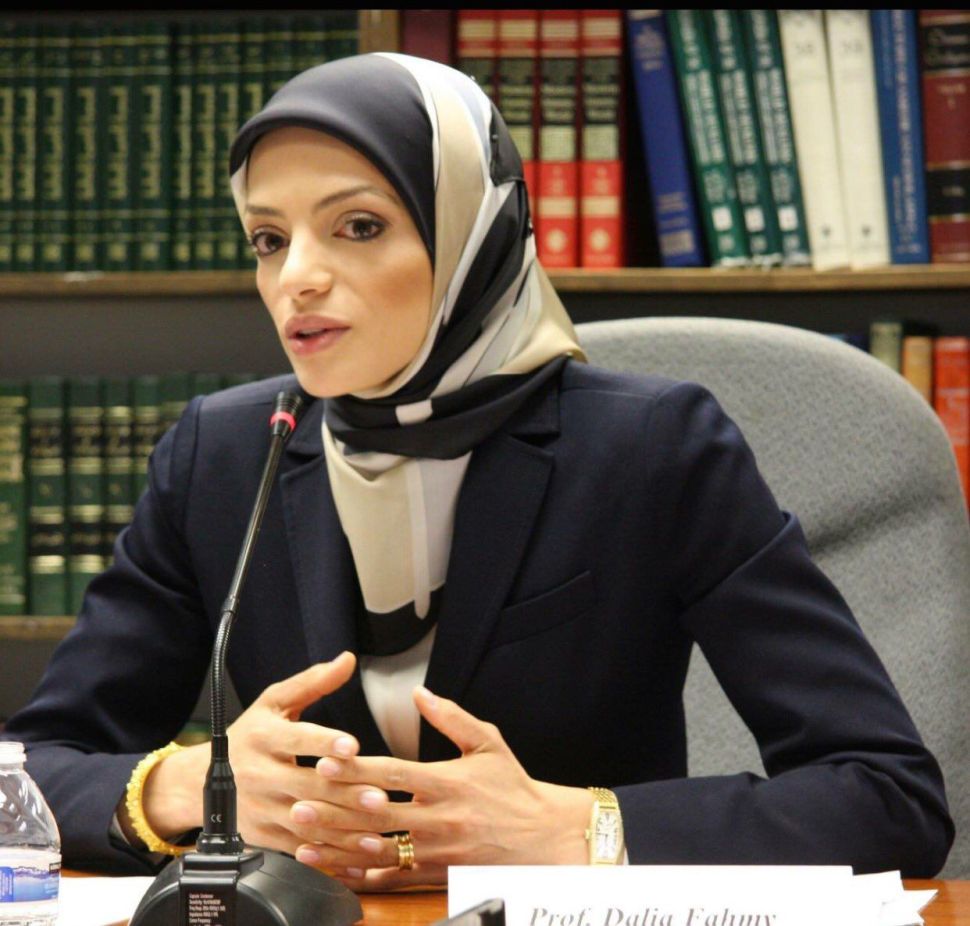